Since it was first identified in 2012, Middle East respiratory syndrome coronavirus (MERS-CoV) has emerged as a novel viral pathogen that causes severe acute respiratory illness, including fever, cough, and shortness of breath (1). The current outbreak of infection with this virus in South Korea, which began on May 20, 2015, has infected 186 patients and caused 36 deaths within 2 months. This developing public health concern has attracted worldwide attention as a potential cause of a global pandemic. Although extensive biologic and clinical characterization should be performed to measure the public health effect of this outbreak, currently available genetic data are informative in clarifying virus alterations that affect transmissibility.

MERS-CoV spike (S) glycoprotein binds cellular receptor dipeptidyl peptidase 4 (DPP4, CD26) for host cell entry (2), and a receptor-binding domain (RBD) on virus S protein mediates this interaction (3). In addition, S proteins expressed on the virus surface can induce host antibodies that block MERS-CoV entry (4). To investigate changes in the S gene associated with viral evolution and possible genetic markers of altered transmissibility, an analysis of S genes obtained from clinical specimens during the early phase of the outbreak was performed.

We identified genetic variability of MERS-CoV S genes among infected persons in South Korea. Samples from 7 patients identified as positive for MERS-CoV were sequenced. These patients were identified by using sequences upstream of the envelope protein gene and open reading frame (ORF) 1a in real-time reverse transcription PCRs (5) (Table 1).

Index case-patient 1 (PAT001) had traveled to Bahrain, the United Arab Emirates, and Saudi Arabia during April 24–May 4, 2015, and became symptomatic on May 11 after his return to South Korea (6). After he visited a local clinic, his symptoms worsened, and he was hospitalized on May 15. During his hospitalization (May 15–17), PAT001 shared a room with PAT003 and the same ward with PAT009, PAT012, PAT013, and PAT015. PAT042 was admitted to the same hospital on May 19 (Figure 1). PAT010 was the son of PAT003 and had visited his father in the hospital before traveling to China, where he became symptomatic and tested positive for MERS-CoV. PAT002 was the wife of PAT001 and cared for him during his illness.

To explore relationships of newly isolated virus strains from South Korea with other MERS-CoV strains, 131 reference MERS-CoV S gene sequences from GenBank and MERS-CoV Sequences June 2015 (http://tinyurl.com/MERS-CoV-4Jun15) (8) and 8 strains from South Korea, including a sequence from PAT010 (ChinaGD01; Chinese Centers for Disease Control and Prevention, Beijing, China), were aligned by using MUSCLE software (9). This alignment was used for subsequent phylogenetic analysis. A phylogenetic tree was constructed by using the maximum-likelihood method with a bootstrap value of 1,000 and RAxML software (10). 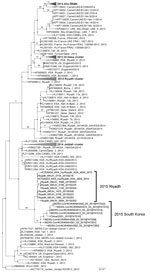 Of the 8 nucleotide substitutions, 4 (A409C, T1586C, G1588C, and G1886A) were nonsynonymous and resulted in 4 amino acid changes (S137R, I529T, V530L, and R629H) (Table 2). Among these mutations, 2 nonsynonymous variants (S137R and V530L) were identified in isolates from PAT002 after the third passage in Vero cells and were assumed to be cell culture–adaptive mutations (11). The I529T and V530L mutations were located in the RBD, but not at the RBD–DPP4 receptor interface (3). The R629H mutation was situated outside the RBD. However, on the basis of only these results, we could not determine whether these amino acid substitutions affected receptor-binding affinity between human DPP4 receptor and MERS-CoV S protein.

To understand the rate at which virus genetic diversification occurred during the outbreak in South Korea, we used the Bayesian–Markov Chain Monte Carlo method in BEAST version 2.1.3 (http://beast2.org/) for 8 S genes. The Hasegawa, Kishino, and Yano substitution model was selected under uncorrelated lognormal molecular clock and a birth–death coalescent.

Accurate genome sequencing can identify spatiotemporal patterns that help understand dynamics of rapid spread of MERS-CoV infection. We report S glycoprotein gene sequences of MERS-CoV from 8 patients and a strain cultured in Vero cells. Genetic information obtained is useful for understanding the evolutionary history of MERS-CoV.

On the basis of our phylogenetic analyses, virus sequences of strains isolated in South Korea in 2015 form a unique clade. Genetic variations elucidated in this study show an unreported sequence in the RBD, which suggests that MERS-CoV circulating in South Korea during the outbreak in 2015 has higher genetic variability and mutation rates. However, we cannot conclude that deleterious effects promoting spread of infection will occur because of these mutations. Additional genetic information will resolve precise characteristics of the MERS-CoV obtained during the outbreak in South Korea.

Dr. Dae-Won Kim is a principle researcher at the Korea National Institute of Health, Korea Centers for Disease Control and Prevention, Cheongju-si, South Korea. His research interests include biology of virus systems, comparative genomics of pathogens, and immunoinformatics.