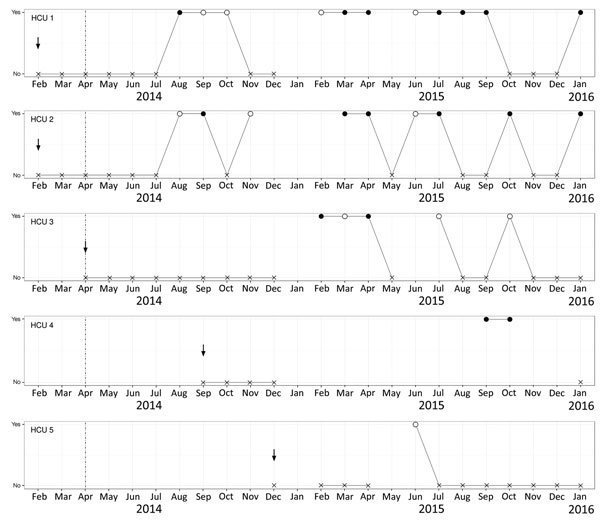 Figure 2. Results of heater–cooler unit (HCU) water surveillance cultures by year and month, University Hospital Zurich, Zurich, Switzerland. The dashed vertical line shows the date of implementation of the intensified protocol (i.e., mid-April 2014). The vertical arrows indicate the start of use of each factory-new HCU in the operating room. HCU 3, HCU 4, and HCU 5 were serviced with the intensified in-house maintenance from the time of delivery. HCU 4 was sent for repair at the manufacturer during December 2014–September 2015. Results of mycobacterial cultures are shown for each HCU. No indicates a negative culture for nontuberculous mycobacteria (NTM), indicated by X. Yes indicates a positive culture for NTM. Filled circles indicate Mycobacterium chimaera; empty circles indicate NTM other than M. chimaera. As per date indicated, cultures were reported as positive if ≥1 water sample (1 sample from cardioplegia and 1 sample from patient circuit were gathered at each date) grew NTM. For missing data points (i.e., no negative or positive results shown), mycobacterial cultures could not be tested because of bacterial overgrowth or lack of availability of the HCU.