Pigs are well known as genetic mixing vessels for human and avian influenza viruses (1,2), and swine influenza viruses (SIVs) occasionally infect humans (3–5). SIV was first reported in humans in 1958 in Czechoslovakia (6). The largest outbreak of classical swine influenza A(H1N1) (CS H1N1) virus occurred in Fort Dix, New Jersey, USA, in 1976 (7,8). Human infections with variant influenza subtype H1N1 and H3N2 viruses with matrix (M) genes derived from swine-origin influenza A(H1N1)pdm09 virus have occurred continuously since the virus was first detected in 2009, and the number of infections has increased substantially in recent years (6). Two cases of Eurasian avian-like influenza A(H1N1) (EA-H1N1) infection have been reported in mainland China. The first case, which began in late December 2010 in a 3-year-old boy in Jiangsu Province, resulted in death; however, the child had a history of renal disease (9,10). The second case, which began in December 2012 in a 3-year-old boy in Hebei Province, caused mild influenza-like illness (11).

EA-H1N1 SIVs have been shown to preferentially bind to human-type receptors, and ferrets have been experimentally infected with some EA-H1N1 SIVs via respiratory droplet transmission (12). EA-H1N1 SIVs reportedly have the potential to transmit efficiently and cause a pandemic among humans after long-term evolution in pigs (12). We report a severe human infection with a reassortant influenza virus in China and the results of genetic, infectivity, and virulence investigations of the novel virus.

We obtained a bronchoalveolar lavage sample from the patient and inoculated it onto MDCK cells for 72 h at 37°C before conducting influenza virus testing. We used Sanger sequencing to subtype the hemagglutinin (HA)–positive isolate from the patient, and we evaluated the bronchoalveolar lavage sample by using next-generation sequencing as previously described (13). For additional studies, we propagated the virus in 9- to 11-day-old embryonated chicken eggs for 48 h at 37°C. The allantoic fluid was then harvested and stored at −80°C until use.

For infectivity and virulence analyses, we used influenza A/Jiangsu/1/2011(H1N1) (JS/1/11 EA-H1N1) virus, which had been previously isolated from a child in China with fatal infection and was stored in the Chinese National Influenza Center, Chinese Center for Disease Control and Prevention, Beijing, China. To propagate JS/1/11 EA-H1N1 virus, we inoculated 9-day-old embryonated pathogen-free chicken eggs with 0.2 mL of virus stock and incubated the eggs for 48 h at 35°C. The allantoic fluid was then harvested and stored at −80°C until use.

We determined virus titrations for JS/1/11 EA-H1N1 virus and the patient’s isolate by using MDCK cells. The 50% tissue culture infectious dose (TCID50) was calculated by using the Reed–Muench formula (14).

DNA sequences generated by Sanger sequencing of the patient-derived virus were assembled using DNASTAR (http://www.dnastar.com/). All sequences obtained in this study were submitted to the Global Initiative on Sharing Avian Influenza Data (GISAID) database (http://platform.gisaid.org). Multiple sequence alignments were performed with MUSCLE software (http://www.drive5.com/muscle/) using MEGA6 (http://www.megasoftware.net/). To determine the identity of the patient’s isolate, we compared sequences for the isolate with those for viruses in the GISAID database. For comparison, we selected representative isolates for each of the following H1N1 lineages: classical swine, Eurasian avian-like swine, Eurasian avian, North American avian, A(H1N1)pdm09, and seasonal human influenza viruses. We also included recent swine isolates from China with sequences available in GISAID. Phylogenetic relationships were estimated for each of 8 gene segments by using the maximum-likelihood method with the general time-reversible plus gamma distribution plus invariable site substitution model, which was implemented in MEGA6 with 1,000 bootstrap replications.

Virulence and Replication Studies in Mice

We used a mouse model to evaluate virulence and replication of the patient-derived virus and JS/1/11 EA-H1N1 virus. All experimental protocols in mice were approved by the Ethics Committee of the National Institute for Viral Disease Control and Prevention, Chinese Center for Disease Control and Prevention (approval no. 201509280027). To determine the virulence of the 2 viruses, we used 8- to 10-week-old female C57BL/6J mice (Vital River Laboratories, Beijing, China). The mice were divided into 3 groups and anesthetized with 0.1 mL of pentobarbital sodium. Two groups then were inoculated intranasally with 10-fold serial dilutions (101–106 TCID50 in 50 μL of phosphate-buffered saline [PBS]) of patient-derived virus or JS/1/11 EA-H1N1 virus; a control group was injected with PBS. Bodyweight was measured daily; mice that lost >25% of their original weight were euthanized for humane reasons. At 14 days postinoculation (dpi), we collected blood samples from all surviving mice and separated the serum for antibody testing. Hemagglutination inhibition (HI) assays were performed, according to standard protocols, using 0.5% turkey erythrocytes (15,16). Serum samples with HI antibody titers of <20 were considered negative.

To determine virus replication in infected mice, we intranasally inoculated all 3 groups of 8- to 10-week-old mice (9 mice/group) with 104 or 106 TCID50 of JS/1/11 EA-H1N1 virus, the patient-derived virus, or PBS (control group). At 1, 4, and 7 days dpi, we euthanized 3 mice in each group. Brain, nasal turbinates, trachea, lung, heart, spleen, kidney, liver, and intestines were collected for virus titer determination using the TCID50 assay and MDCK cells.

On June 30, 2015, fever (up to 39.5°C), cough, and dyspnea developed in a 30-month-old boy in Hunan Province. On July 2, he was admitted to the intensive care unit of Hunan Provincial People’s Hospital in Changsha, China. Complications (i.e., severe pneumonia, respiratory failure, acute respiratory distress syndrome, and heart failure) were observed (Figure 1). A right pleural effusion and a collapsed lower right lung were noted on a chest radiograph from day 2 after illness onset (Technical Appendix Figure 1). Oseltamivir was administered on July 3, and on July 10, closed drainage of the thoracic cavity was performed. On July 24, day 24 after illness onset, no obvious abnormalities of the cardiac diaphragm were observed (Technical Appendix Figure 1). On July 27, the patient was transferred to the general hospital ward, where he recovered and was discharged on August 7 (Figure 1).

The bronchoalveolar lavage sample from the patient was positive for subtype H1N1 influenza virus based on deep sequencing; no other virus sequences were found (Technical Appendix Figure 2). Virus was isolated from the original patient sample, and Sanger sequencing confirmed the pathogen as a subtype H1N1 influenza virus. We termed the virus influenza A/Hunan/42443/2015(H1N1) (HuN EA-H1N1) and deposited the nucleotide sequences in the GISAID database (accession nos. EPI691392–EPI691399).

Eight genes from HuN EA-H1N1 virus (PB2, PB1, PA, HA, NP, NA, M, and NS) consisted of 2,280, 2,274, 2,151, 1,701, 1,497, 1,410, 982, and 838 nt, respectively. The amino acid motif PSIQSR↓G at the HA cleavage site indicated that the virus was a low pathogenicity influenza virus, and aa 190D and aa 225E (H3 numbering) in the HA protein suggested preferential binding to human influenza virus-binding receptor SAα-2,6-Gal (a sialyl-galactosyl residue with α-2,6-Gal linkage). Residues in the neuraminidase (NA) protein, which were associated with neuraminidase inhibitory drugs (17), implied that HuN EA-H1N1 might be sensitive to neuraminidase inhibitors, but an S31N substitution in M2 suggested resistance to M2 ion channel inhibitors.

Virulence and Replication in Mice 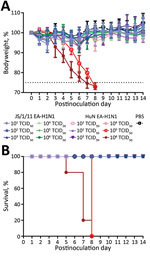 We also investigated the tissue tropism and replication of HuN EA-H1N1 and JS/1/11 EA-H1N1 viruses in 2 groups of mice. Both viruses replicated in the respiratory tract, but infectivity was substantially divergent (Figure 4). At 1, 4, and 7 dpi, no virus was detected in any tissues of mice inoculated with 104 TCID50 of JS/1/11 EA-H1N1 virus. However, at the same time points, virus was clearly present in the respiratory tract, including the nasal turbinates, trachea, and lungs, of mice inoculated with 104 TCID50 of HuN EA-H1N1 virus. These findings were consistent with antibody responses in the mice (Table 1).

Mice inoculated with 106 TCID50 of JS/1/11 EA-H1N1 virus had limited virus replication in nasal turbinates and tracheal tissues. However, virus was clearly present in lung tissues at 1 and 4 dpi, but titers decreased rapidly by 7 dpi (Figure 4). Compared with JS/1/11 EA-H1N1 virus–infected mice, those infected with HuN EA-H1N1 virus had substantially higher virus titers in nasal turbinates, trachea, and lungs (Figure 4) and occasionally in extrapulmonary organs, including the liver (102.0 TCID50/mL) and kidney (101.8 TCID50/mL) of 1 mouse. A high virus titer was persistent in the respiratory tracts of HuN EA-H1N1–infected mice. These findings were consistent with bodyweight and survival data (Figure 3).

We conducted a retrospective study to investigate the potential for human-to-human transmission of HuN EA-H1N1 virus, a reassortant EA-H1N1 virus. A total of 12 close contacts (4 family members and 8 healthcare workers) of the patient were included in this investigation. No family members reported influenza-like symptoms, but 3 healthcare workers showed signs and symptoms of illness. Whole-blood specimens from all close contacts were obtained for HI testing (15,16). An antibody response to HuN EA-H1N1 virus (HI titer of 40) was detected in only 1 contact, a doctor who exhibited signs of illness (Table 2). However, fever developed in this person on the same day she had contact with the patient, making it unlikely that her symptoms were caused by exposure to the patient. Furthermore, the positive HI antibody result for this contact may have been caused by a cross-reaction with A(H1N1)pdm09 virus (11,20). Thus, these findings indicate that human-to-human transmission of HuN EA-H1N1 virus did not occur.

A previous study showed that EA-H1N1 SIVs preferentially bind to human-type receptors, and some of the tested viruses were transmitted to ferrets by airborne droplets (12). That study concluded that EA-H1N1 SIVs have the potential to transmit efficiently and to cause a human influenza pandemic. We report a case of human infection with a reassortant EA-H1N1 swine influenza virus. Four internal genes of the virus were derived from A(H1N1)pdm09 virus. The 190D aa and 225E aa (H3 numbering) in the HA protein of the HuN EA-H1N1 virus suggested preferential binding to the SAα-2,6-Gal receptor. Although human-to-human transmission was not detected in our study, EA-H1N1 viruses have been reported to transmit efficiently via respiratory droplets in the ferret model (12). In addition, EA-H1N1 virus gene segments (NA and M genes) have been reported to contribute to the efficient respiratory droplet transmission of A(H1N1)pdm09 viruses in the ferret model (21). Our studies in mice also showed that infectivity and virulence were increased in reassortants of EA-H1N1 virus and A(H1N1)pdm09 virus. Thus, given the prevalence of novel EA-H1N1 viruses in pigs and their potential transmissibility to and pathogenicity in humans, enhanced influenza surveillance should be instituted among swine and humans.

Our study had several limitations. First, potential sources of infection for the HuN EA-H1N1 virus–infected patient were not identified. We collected 9 swab samples from pigs raised on the premises of the patient’s home, which was in a rural location, but EA-H1N1 virus was not isolated. Second, despite the high similarity of HA (98.9%) and NA (97.7%) genes from JS/1/11 EA-H1N1 and HuN EA-H1N1 viruses (online Technical Appendix Table), we could not conclude that the A(H1N1)pdm09 virus–derived internal genes were associated with the high virulence of HuN EA-H1N1 virus and the patient’s severe clinical syndrome. More investigations are needed to verify the virulence factor of HuN EA-H1N1 virus. Third, because an acute-phase serum sample was not available, we could not determine whether a doctor who exhibited signs of illness became infected before or after exposure to the patient; however, the doctor had a fever the same day she had contact with the patient.

Page created: October 18, 2016
Page updated: October 18, 2016
Page reviewed: October 18, 2016
The conclusions, findings, and opinions expressed by authors contributing to this journal do not necessarily reflect the official position of the U.S. Department of Health and Human Services, the Public Health Service, the Centers for Disease Control and Prevention, or the authors' affiliated institutions. Use of trade names is for identification only and does not imply endorsement by any of the groups named above.