We screened serum samples referred to the national reference laboratory in Guatemala that were positive for chikungunya or dengue viruses in June 2015. Co-infection with both viruses was detected by reverse transcription PCR in 46 (32%) of 144 samples. Specimens should be tested for both arboviruses to detect co-infections.

Chikungunya virus (CHIKV) and dengue virus (DENV) are arboviruses currently circulating in Southeast Asia, Central and West Africa, the Pacific islands, and the Americas, and their transmission can occur simultaneously (1). DENV and CHIKV co-infections have been reported from 13 of 98 countries/territories to which the viruses are endemic and are more likely to occur in areas with high transmission intensity. Co-infection rates reported have ranged from 2% in Gabon to 34% in Nigeria (1–3).

The Americas are currently experiencing an unprecedented number of DENV infections that coincided with emergence of CHIKV infections. A total of 2.3 million DENV infections and 635,000 CHIKV infections were reported in this region in 2015 (4,5). However, details of the frequency of co-infection are lacking (1), although a recent study involving 173 samples from Nicaragua that were positive for either virus found a co-infection rate of 22% (6).

Co-infections might be frequently missed by surveillance systems because Pan American Health Organization (PAHO) diagnostic algorithms indicate that DENV-positive samples do not need to be tested for CHIKV or other viruses and vice versa (7). The clinical role of co-infection is somewhat disputed because some (8) but not all (1,9) studies reported an association between co-infection and disease severity for symptoms such as diarrhea (9) or hemorrhage (10).

Although Guatemala has had constant dengue transmission for >20 years (11), the first cases of CHIKV infection were reported in September 2014. We report the proportion of patients co-infected with DENV and CHIKV and the association of co-infection with disease severity among patients referred for diagnosis to the National Health Laboratory (NHL) in Guatemala City, Guatemala, in June 2015. Because Zika virus was not introduced until November 2015, we did not test for this virus in this study.

We selected for screening a convenience set of consecutive samples received in June 2015, which is the peak transmission season for DENV, and reported as having positive results by reverse transcription PCR (RT-PCR) for either virus. Clinical data for patients were obtained from surveillance databases to compare patients with monoinfections or coinfections with DENV or CHIKV. All samples were obtained from patients <5 days of symptom onset. Samples were obtained after patients provided consent and donated to laboratories for further testing. All samples were anonymous. Results of the study were not used for clinical management or surveillance purposes. 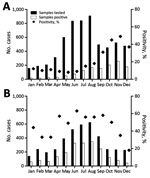 Figure. Positivity of samples tested for A) dengue virus and B) chikungunya virus, Guatemala, 2015.

Samples selected were consecutive positive samples from the beginning of the month; there were no additional exclusion or inclusion criteria. We included as many samples as possible within the time available. RNA was extracted by using a Viral RNA Mini Kit (QIAGEN, Manchester, UK) and tested by using the US Centers for Disease Control (CDC; (Atlanta, GA, USA) multiplex DENV RT-PCR and the CDC CHIKV 6856F/6981c/6919-FAM RT-PCR (12).

Our findings must be viewed with caution because of the limitations of this study. The study was not powered to analyze clinical associations with a high robustness because of the small number (n = 46) of co-infected samples tested. Also, because samples were selected at a reference laboratory and only symptomatic cases were tested, the prevalence of co-infection might be different in a less selected population.

The PAHO algorithm recommends screening clinical specimens by using consecutive assays and ending screening once a pathogen is identified. CDC in turn recommends simultaneously conducting RT-PCRs for DENV, CHIKV, and Zika virus. Emergence of Zika virus in Latin America has further complicated diagnosis of arboviral infections, and simultaneous co-infections with all 3 arboviruses have been reported (13). Although the PAHO approach misses co-infections, the CDC approach is costlier.

Guatemala used the PAHO algorithm because of a shortage of consumable supplies. On further testing, 25 (33.8%) of 74 DENV-positive samples were positive for CHIKV, and 21 (30%) of 70 CHIKV-positive samples were positive for DENV. Because Guatemala reported 49,043 cases of DENV and CHIKV infections in 2015, it is likely that the algorithm missed a large number of co-infections. Patients with single and dual infections had similar clinical manifestations in this limited study.

The frequency of arbovirus coinfections in Guatemala is high. Simultaneous screening for DENV, CHIKV, and Zika virus in disease-endemic areas would improve the quality of arboviral surveillance and potentially aid in clinical management of the disease.

Dr. Edwards is a postdoctoral research associate at the Research Centre for Drugs and Diagnostics in the Liverpool School of Tropical Medicine, Liverpool, UK. His primary research interests are design and implementation of molecular tools for diagnosing arboviral infections and antimicrobial drug resistance.

This study was supported by a Medical Research Council Confidence in Concept award (MC-PC_14111).