To the Editor: Borrelia miyamotoi causes a recently recognized tickborne zoonosis in Eurasia and North America (1). The species has been detected in Ixodes persulcatus ticks in Asia and Russia, I. ricinus ticks in Europe, and I. scapularis and I. pacificus ticks in North America. In most of these regions, B. miyamotoi is sympatric with Lyme disease agents, such as B. burgdorferi, and both pathogens are transmitted locally by the same species of Ixodes ticks. B. miyamotoi generally is less prevalent than B. burgdorferi in nymphs and adults in North America (2), except in California, where the prevalences of the 2 species in populations of nymphal and adult I. pacificus ticks are similar (3–6).

Genomes of isolates of B. miyamotoi from I. persulcatus and I. scapularis ticks have been sequenced (7). Comparatively less was known about B. miyamotoi in I. pacificus ticks. Limited sequence data of 16S ribosomal RNA and flagellin genes and the 16S-23S intergenic spacer (IGS) were sufficient to identify the I. pacificus–borne spirochete as a sister taxon to B. miyamotoi from elsewhere (3,4). Until B. miyamotoi is isolated from I. pacificus ticks, determination of additional sequences from I. pacficus ticks from California addresses 2 issues of phylogeographic and potential epidemiologic importance: Is the California population of B. miyamotoi more akin to the strain across the Pacific Rim or to the strain thousands of kilometers to the east in North America? Will the noted pattern of exclusive association between the genotype of B. miyamotoi and the species of Ixodes vector continue to hold (1)? 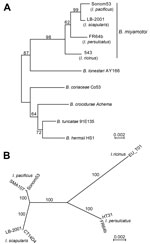 Figure. Phylograms of 16S ribosomal RNA sequences (A) and of multilocus sequence typing (MLST) genes (B) of Borrelia miyamotoi strains from Ixodes ticks collected in California, USA, and selected other Borrelia species....

We evaluated DNA extracts of B. miyamotoi–infected I. pacificus ticks collected by and stored at 2 laboratories in the San Francisco Bay area of California. Ticks had been collected while questing either on low vegetation or in leaf litter. To confirm B. miyamotoi in candidate extracts and to exclude extracts that also contained B. burgdorferi sensu lato, we used a quantitative PCR, which differentiates relapsing fever and Lyme disease group species (2). Two extracts that met these criteria were Sonom53 from a nymph in Sonoma County, California (38.328758, −122.625286), and SMA107 from an adult male tick in San Mateo County, California (37.466999, −122.283532). We amplified DNA by PCR for 1,307 bp of the 16S ribosomal RNA gene (8) and variable lengths of the IGS (9). In addition, we performed PCR amplification and sequencing of partial sequences of 8 chromosomal genes used for multilocus sequence typing (MLST): clpA, clpX, nifS, pepX, pyrG, recG, rplB, and uvrA (10). The primers (and annealing temperatures for 35 cycles) were as given (http://pubmlst.org/borrelia), except for these modifications: clpA (53°C); clpX forward 5′-CCGTTGCTATTTGTTTTGAATGCTCT-3′ (55°C); pepX forward 5′-TTAAAACTTGATGATAAATGGTCATTA-3′ and reverse 5′-TTAAAACTTGATGATAAATGGTCATTA-3′ (52°C); pyrG forward 5′-CTTTTAGTAATTGAGATTGGTGGT-3′ and reverse 5′-CAGCATCAAGTATTCCACAAAC-3′ (55°C); recG forward 5′-CTAGCATTCCTTTAGTTGAGGC-3′ and reverse 5′-TTSTGTTAAAGGTTCCTTATAAAG-3′ (52°C); rplB forward 5′-ATTAAAACTTATAGGCCAAAAAC-3′ and reverse 5′-GGCTGACCCCAAGGAGAT-3′ (55°C); and uvrA forward 5′-GCTTAAATTTTTAATTGATGTTGGA-3′ and reverse 5′-CAAGGAACAAAAATRTCAGGC-3′ (52°C). On a Bio-Rad T100 thermal cycler (Hercules, CA, USA) and with Apex Master mix (Genesee Scientific, San Diego, CA, USA), PCR extension at 72°C was 1.5 min for clpX and 1.0 min for others; final elongation was for 5 min at 72°C. Products were sequenced over both strands at GENEWIZ (San Diego, CA, USA) by the Sanger method either directly or after cloning into a plasmid vector. Resultant sequences were aligned with homologous sequences (Figure). Alignments and distance neighbor-joining and maximum-likelihood phylograms were generated with Seaview4 (http://doua.prabi.fr/software/seaview). The equal length MLST sequences, as specified (10), for each locus were concatenated.

We determined a rooted neighbor-joining phylogram of 16S ribosomal RNA gene sequences of B. miyamotoi from different Ixodes species and that of Amblyomma americanum tickborne B. lonestari (Figure, panel A). Other species of the relapsing fever group served as an outgroup. B. miyamotoi sequences from I. pacificus ticks in 2 San Francisco Bay area counties clustered with sequences from I. scapularis–borne organisms rather than with I. persulcatus–borne organisms in Asia or an I. ricinus–borne isolate in Europe. This analysis confirmed that the organism in I. pacificus was B. miyamotoi. An unrooted phylogram of 4,776 nt of concatenated MLST sequences originating in I. pacificus, I. scapularis, I. persulcatus, or I. ricinus ticks had similar topology and differentiated the different strains (Figure, panel B). The B. miyamotoi organisms from 2 counties differed at 1 position, a synonymous transition in pyrG, among the MLST loci. IGS sequences of the 2 organisms were the same (GenBank accession no. KU184505) and identical to the IGS of other B. miyamotoi in I. pacificus ticks (e.g., GenBank accession no. KF957669). As observed previously (4,9), they were distinct from strains associated with other Ixodes species.

In conclusion, we identified differences in several genetic loci between B. miyamotoi in I. pacificus ticks and organism strains associated with other Ixodes species. However, we found a close phylogenetic relationship between organisms from the far-western and the northeastern United States.

This research was supported in part by grant R21 AI100236 from the National Institute of Allergy and Infectious Diseases, National Institutes of Health, to A.G.B. and by a generous gift from Tom Eames and Geneva Anderson to R.S.L.