To the Editor: In Western countries, human infection with hepatitis E virus (HEV) is mostly autochthonous and zoonotic through ingestion of contaminated food or direct contact with infected animals and very occasionally is imported from regions to which it is endemic to humans (tropical and subtropical areas) (1). Domestic pigs and wild boars are important zoonotic reservoirs of HEV worldwide (2).

In continental France, grouped cases of hepatitis E have been described after ingestion of Corsican specialties made with raw pig liver known as ficatelli, traditionally eaten grilled or raw after curing (3,4). A survey of French food products detected HEV RNA in 30% of ficatelli samples (5). A recent nationwide study of blood donors in France showed a high (>60%) HEV seroprevalence in Corsica, suggesting local hyperendemicity (6). Estimated prevalences of HEV RNA from wild boars and domestic pigs in Corsica were 2.3% and 8.3%, respectively (F. Jori, unpub. data). We aimed to evaluate, at a molecular level, the role of local wild boars and domestic pigs from Corsica in human infections or food contaminations. 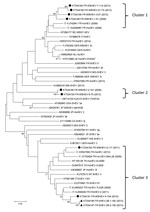 We retrieved partial sequences of HEV open reading frame 2 capsid (7) from samples from 8 wild boars hunted during 2009–2013 and from 2 domestic pigs collected at a slaughterhouse in 2013 (F. Jori, unpub. data) and compared them with sequences available in GenBank. This genomic region is used frequently in phylogeny and reflects the diversity of HEV (8). After alignment with reference sequences for subtyping (9) and their closest sequences, we constructed a phylogenetic tree (Figure). All 10 sequences belonged to HEV genotype 3 and were distributed into 3 distinct clusters.

Cluster 1, subtype 3c, comprised 4 wild boar sequences (FR-HEVWB-1-91, FR-HEVWB-3-07, FR-HEVWB-7-114, FR-HEVWB-8-115) that had 96%–97% nt identity. These sequences were identified during 3 successive hunting seasons (2009, 2010, and 2013) in the same hunting area, suggesting that HEV sequences can be stable, with limited genetic variability, during at least 4 years in a local population of wild boars. These sequences were close to HEV wild boar sequences from Belgium (GenBank accession no. KP296177) and Germany (GenBank accession no. FJ705359; 3c reference sequence). A possible introduction of wild boars from northeast continental France into Corsica during the 1990s could explain such similarity (C. Pietri, pers. comm.). Two human cases reported in southeastern France (GenBank accession nos. GQ426997, KJ742841) in 2008 and 2009 also aggregated within this cluster (94%–95% nt identity), indicating possible zoonotic transmissions from wild boars to humans.

Cluster 2 comprised 2 wild boar sequences (FR-HEVWB-2-101 and FR-HEVWB-6-75) with 99.3% nt similarity, collected in 2009 and 2012 from the same geographic area (Haute Corse, <10 km apart). This cluster is distant from the subtypes assigned by Smith et al. (9) and shows <86.5% nt identity with reference sequences (Figure), indicating a possible local and stable evolution in space and time.

Cluster 3, subtype 3f, comprised sequences isolated from wild boars and domestic pigs from Corsica, humans from continental France, and 1 food sample from Corsica. The 2 domestic pig sequences (FR-SHEV-2B-1-182, FR-SHEV-2B-2-190) were 100% identical and shared 97.5% nt identity with a wild boar sequence (FR-HEVWB-4-104), suggesting transmission between domestic and wild pigs. These 2 swine sequences shared 96% nt identity with a sequence amplified in 2011 from a ficatellu sample (FR-HEVFIG-3; GenBank accession no. KJ558438) (5) from the same geographic area of Corsica (Haute Corse) and 96% nt identity with an isolate from a patient with acute hepatitis E recorded in France in 2009 (GenBank accession no. JF730424). In addition, the wild boar sequence in this cluster (FR-HEVWB-4-104) shared 96.4% nt identity with the same ficatellu sample and 97.1% nt identity with the same patient in France. This finding suggests that some locally produced ficatelli could be contaminated with HEV from local domestic pigs or wild boars. The human infection also suggests that zoonotic transmission might have occurred through contact with local pig or wild boar reservoirs or through ingestion of contaminated food products. No additional information is available about this human case that might attribute the contamination to 1 of the sources.

Also in cluster 3, another Corsican wild boar sequence (FR-HEVWB-5-117), isolated in 2011, shared 96.2% and 95.7% nt identity with 2 human sequences identified from continental France in 2013 (GenBank accession no. KR027083) and 2009 (GenBank accession no. JF730424 FR-HuHEV-09AL38). This finding again suggests a zoonotic origin for these human cases. Cluster 3 illustrates well a possible path of transmission between wildlife, domestic pigs, food, and human infection and the potential for dissemination of HEV outside Corsica.

Our results provide evidence suggesting a dynamic exchange of HEV between domestic and wild swine reservoirs and possibly resulting in transmission from those reservoirs to humans through ingestion of infected food products. These animal reservoirs are common and abundant (http://www.oncfs.gouv.fr/IMG/file/mammiferes/ongules/ongules_sauvages/TCD/haute_corse_ongules_sauvages_tableau_departemental.pdf; http://draaf.corse.agriculture.gouv.fr/IMG/pdf/Chiffres_cles_Corse-2015_cle825d93.pdf) and represent a sustainable source of HEV exposure in Corsica.

We are grateful to Gaël Stéphant for technical assistance in swine sample analysis. We thank Christian Pietri for sharing his knowledge on the origin of wild boar population in Corsica.