Beginning in July 2015, SLEV activity was detected in mosquito pools, and sentinel chicken seroconversions were detected in the Coachella Valley in Riverside County, California. Given the reemergence of SLEV in California and Arizona in summer 2015, the purpose of this study was to describe the temporal and spatial detection of SLEV in California, compare its circulation intensity with that of WNV in California in 2015, and define the genetic relatedness of SLEV from both states to SLEV from elsewhere to infer a possible origin and pattern of spread. 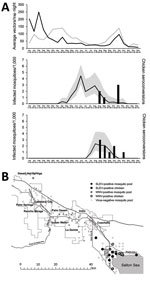 Mosquito and arbovirus surveillance was conducted in the Coachella Valley in 2015 (Figure 1, panel A). SLEV RNA was first detected in a pool of Culex tarsalis mosquitoes by quantitative reverse transcription PCR on July 28, 2015, and subsequently in 37 more pools of the same species through October 6 (7). The number of SLEV-positive pools peaked at 23 during the first 2 weeks of August. WNV was detected in mosquitoes during April–November 2015, with a peak in the week of June 21. Although SLEV was detected only in Cx. tarsalis pools, WNV RNA was detected in 83 Cx. quinquefasciatus pools during April 24–November 5 and in 16 Cx. tarsalis pools during May 19–September 29. During the period of co-detection of both viruses (July–November), peak minimum infection rates were higher for WNV than for SLEV.

Vector abundance did not parallel peak infection rates (June for WNV and August for SLEV). Instead, vector abundance in 2015 was lower at most times than the 5-year average, calculated as the geometric mean of female Cx. tarsalis and Cx. quinquefasciatus mosquitoes collected bimonthly in traps at the same locations during 2010–2014 (8). The trend of decreasing mosquito abundance in midsummer in southern California (especially in the Coachella Valley), concurrent with increasing arbovirus activity, has been well documented (9). This trend most likely relates to changes in age structure, with progressively more parous female mosquitoes tested as overall vector population numbers decline. Sentinel chicken seroconversion to SLEV, detected by enzyme immunoassay and confirmed by plaque-reduction neutralization test, was detected during August 28–November 9, with a total of 9 seroconversions in 104 chickens (8.7% seropositive) (10,11). WNV seropositive chicken serum samples were also reported starting on August 28, but with fewer (n = 6 [5.7%] of serum specimens tested) seroconversions to WNV than to SLEV.

Although most mosquito pools contained detectable RNA for only WNV or SLEV, 4 pools tested positive for both viruses. Both viruses were circulating in the summer of 2015 at the north and west shores of the Salton Sea in the Coachella Valley (Figure 1, panel B). SLEV activity was more focal than WNV activity and was limited to Cx. tarsalis mosquitoes collected in a 20-km radius near wetlands and agricultural habitats by the Salton Sea, whereas WNV activity spanned >80 km and was concentrated in Cx. quinquefasciatus mosquitoes collected in more densely populated residential habitats in the central part of the Coachella Valley. Co-circulation of both viruses in ecologically diverse habitats near the Salton Sea at the same time shows that early-season WNV activity did not preclude later SLEV circulation.

Unlike California, where continual SLEV testing has been conducted since 1969, the absence of SLEV activity in mosquitoes in Arizona during 2010–2014 may have been due to a lack of recent SLEV testing. Maricopa County began testing mosquito pools for SLEV RNA during the 2015 human epidemic and then retrospectively detected SLEV in an archived WNV-positive mosquito pool from November 2014. We sequenced complete genomes of 1 SLEV isolate from California in 2015 and two isolates from Arizona in 2015, and partial genomes of the 2014 isolate from Arizona and 1 additional 2015 California isolate from reverse transcription PCR amplicons using SLEV primers (Table; GenBank accession nos. KX258460–62 [California], KX965720 [Arizona]). We further determined the phylogenetic relationships of the sequenced isolates with each other and with complete SLEV genomes from GenBank, including another 2015 Arizona isolate (strain 121B, GenBank accession no. KT823415) sequenced by the Centers for Disease Control and Prevention (Figure 2). The 2014 and 2015 California and Arizona SLEV isolates share >99% nucleotide identity with each other and also with their closest published relative, isolated from Cx. quinquefasciatus mosquitoes collected in Cordoba, Argentina, in 2005. The 2015 SLEV isolates are genetically distinct from the 2003 Imperial Valley California strain that was isolated before the 11-year absence of SLEV activity in the state. These results suggest that there was likely a single introduction of SLEV into the United States from South America (possibly Argentina) no later than November 2014, the earliest dated sample from which SLEV was isolated in Arizona, and that the virus spread in the summer of 2015 from Arizona to California. Notably, 1,710 mosquito pools representing 65,287 individual mosquitoes from the Coachella Valley were negative for SLEV during 2014.

Because human SLEV viremia levels are low and insufficient to infect mosquitoes, the virus may have been introduced into the United States from South or Central America by a viremic migratory bird or possibly by an infected mosquito exploiting human transportation (12). Earlier US SLEV strains from Tennessee and Texas isolated in 1974 and 2001, respectively, are most closely related to 1969 and 1978 Guatemalan strains (Figure 2). A similar ancestral topology of Brazil and Peru strains from the 1970s to the 2003 California isolate also suggests movement from South to North America. The Salton Sea and associated habitats possess diverse avifauna and may serve as a resting point for SLEV-infected migratory birds that traverse the Pacific flyway (13). Alternately, SLEV may have come from elsewhere in the United States after being introduced from South or Central America, but sequences from US states reporting SLEV activity in recent years are not publicly available. In the case of east-to-west movement across the United States, postnesting birds may have mediated spread by way of agricultural areas of northern Mexico. However, it is unknown whether SLEV is active in Mexico or the Imperial Valley, which lies between Phoenix and the Coachella Valley, because surveillance is not performed in those regions.

Our findings highlight how mosquitoborne viruses are emerging and reemerging to establish autochthonous transmission, including SLEV in southern California that produced severe and fatal human disease in 2015 in Arizona (6). Prospective surveillance can identify viruses circulating in mosquitoes even in the absence of human cases of infection, as in Coachella Valley in 2015, and may provide an early warning of future outbreaks.

Dr. White has worked at the Coachella Valley Mosquito and Vector Control District for the past 6 years, studying the transmission of arboviruses and mosquito control methods.