To clarify the characteristics of circulating Bordetella pertussis isolates, we used pulsed-field gel electrophoresis (PFGE) to analyze 5,262 isolates collected in the United States during 2000–2012. We found 199 PFGE profiles; 5 profiles accounted for 72% of isolates. The most common profile, CDC013, accounted for 35%–46% of isolates tested from 2000–2009; however, the proportion of isolates of this profile rapidly decreased in 2010. Profile CDC237, first seen in 2009, increased rapidly and accounted for 29% of 2012 isolates. No location bias was observed among profiles during 2000–2010, but differences were observed among isolates from different states during 2012. Predominant profiles match those observed in recent European PFGE studies. PFGE profile changes are concurrent with other recent molecular changes in B. pertussis and may be contributing to the reemergence of pertussis in the United States. Continued PFGE monitoring is critical for understanding the changing epidemiology of pertussis.

Despite high coverage with Bordetella pertussis component–containing vaccines, the incidence of reported pertussis has been increasing in the United States, and notable pertussis outbreaks have occurred in recent years (1). More than 48,000 pertussis cases were reported in the United States in 2012, the highest number reported since 1955 (2). Multiple factors have likely contributed to this increase, including increased recognition of pertussis among the general population, increased diagnosis of healthcare providers, improved diagnostic testing and reporting, and waning immunity from pertussis vaccines (3–5).

Researchers in several countries have used methods such as pulsed-field gel electrophoresis (PFGE), multilocus sequence typing (MLST), and multilocus variable-number tandem-repeat analysis (MLVA) to study the evolution of molecular changes in B. pertussis populations over time (9–25). Recent studies have documented genetic changes in currently circulating B. pertussis strains, including shifts in virulence-associated protein phenotypes and predominant molecular types between prevaccine and postvaccine eras. These shifts may also be contributing to the resurgence of pertussis as a result of pathogen adaptation to current pertussis vaccines (26–28). In addition, recent changes in the epidemiology of pertussis have highlighted an increasing number of cases among older children and adolescents who have been fully vaccinated with ACVs; this increase further supports a role for vaccine pressure in the reemergence of pertussis in the United States (1,3–5,7).

PFGE, which can differentiate between individual isolates, has been used to characterize US B. pertussis isolates for >15 years (19,29). Because this method uses the entire genome, PFGE typing is more discriminatory for B. pertussis than PCR-based typing methods, such as MLST and MLVA, which analyze the sequences of a few select loci (22,30). MLST and MLVA typing must be used in tandem to obtain discriminatory power similar to that of PFGE typing (13,30).

A total of 5,262 isolates were available for testing, collected from 32 states during 2000–2012 (Table). Isolates were identified and collected through Enhanced Pertussis Surveillance (EPS) conducted as part of the Emerging Infections Program Network, through routine state and local health department pertussis surveillance, or during localized outbreaks. Isolates from Massachusetts and Minnesota were characterized by PFGE in their respective state public health laboratories, and tagged image file format images of PFGE gels were sent to the Centers for Disease Control and Prevention (CDC) for analysis; isolates from all other states were sent directly to CDC for PFGE characterization (Table). Because running conditions differed from those of the PFGE method commonly used in Europe, images produced by each method could not be directly compared (9,11,12,16–18,23). An additional set of 5 B. pertussis isolates, representing European profiles BpSR3, BpSR5, BpSR10, BpSR11, and BpSR12, was also included in this study with which to compare US isolates with the most commonly circulating PFGE profiles in several European countries during 1998–2009 (12).

PFGE was performed by using restriction enzyme XbaI (19), based on the method developed by Gautom et al. (31) and similar to that currently used by US state health departments participating in CDC’s PulseNet (http://www.cdc.gov/pulsenet/pathogens/index.html) for the typing of foodborne pathogens (32). PFGE patterns were compared with those in a database of B. pertussis isolate profiles maintained at CDC, and profiles were assigned on the basis of bands in the 125- to 450-kb range by using BioNumerics software version 5.01 (Applied Maths, Austin, TX, USA).

To identify predominantly circulating profiles, we analyzed overall circulating profiles for each individual year of the study period. Distributions were also compared during 2 shorter periods (2000–2009 and 2010–2012) to assess differences between recent peak years in disease and the remainder of the study period. To assess how states that submitted a large proportion of isolates affected the overall study findings, we performed 2 subanalyses. First, since Massachusetts and Minnesota together contributed >50% of isolates annually during 2000–2010 (Table), we conducted a subanalysis to check for profile local bias by comparing isolates collected from these states during 2000–2010 (Massachusetts, n = 1,758; Minnesota, n = 897), with isolates collected from all other states combined (n = 1,639). A second subanalysis was conducted in which isolates obtained during 2012 from 2 states that experienced substantial statewide epidemics of pertussis, Vermont (n = 333) and Washington (n = 222), were compared with isolates obtained from the other 10 states (n = 275) in 2012 to assess the distribution of circulating PFGE profiles during a period of widespread disease. The χ2 test was used for comparison of proportions; p<0.005 was considered significant.

To assess changes among the study isolates over time, we calculated genetic diversity overall and by year of isolation using the Simpson Index of Diversity (33). CIs were calculated as described by Grundmann et al. (34). 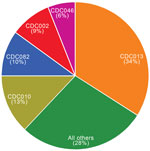 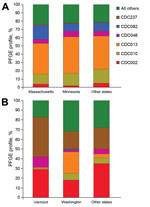 When we compared profiles of Massachusetts and Minnesota isolates to isolates of all other states combined during 2000–2010, our subanalysis revealed that CDC013 was the most common PFGE profile among all 3 groups, ranging from 37% to 44% of isolates (Figure 3, panel A). In addition, CDC010 accounted for a similar proportion of isolates across all groups (12%–17%). Whereas a similar proportion of isolates were of profile CDC082 in Minnesota and in all other states combined (9% and 10%, respectively), this profile was found in significantly higher proportion in Massachusetts (17%, p<0.0001), where it was the second most predominant profile. CDC046 accounted for a consistent 5%–7% of isolates from all 3 groups, and CDC002 frequency ranged between from 2% to 5%.

In contrast to the isolates collected during 2000–2009, profile predominance changed rapidly among isolates collected during 2010–2012, and a different profile predominated each year. Rare profiles such as CDC237 quickly became more common than the previously predominant CDC013 profile. Two additional rarely seen profiles, CDC217 and CDC253, which were closely related to the CDC237 profile, also increased significantly in recent years. These findings prompted us to explore possible associations between PFGE profile and other molecular changes that have recently occurred in the organism. Specifically, in recent years, pertactin-deficient B. pertussis isolates have rapidly emerged. Pertactin is a key immunogen included in all ACVs currently used in the United States (21,30), and data have suggested a possible selective advantage of pertactin-deficient mutants among ACV-vaccinated populations (27). Using supplemental data, we observed that 87% of 2012 isolates included in our analysis were pertactin-deficient. Of interest, isolates with PFGE profiles CDC002 and CDC237, the most common profiles among 2012 isolates, were significantly more likely to be pertactin-deficient than isolates with profile CDC013, the most common profile during 2000–2009. That these 2 profiles started becoming more predominant in 2010, coinciding with the rapid increase in pertactin-deficient isolates in the United States (21), suggests a linkage between the 2 changes. To date, no associations have been reported between pertactin-deficiency and specific PCR-based MLVA or MLST types, which reinforces the discrimatory power of PFGE typing methods and highlights the value of this method for elucidating B. pertussis evolution on a more granular level (24,30).

Although Massachusetts and Minnesota contributed a large proportion of isolates during 2000–2010, we observed similar distributions among 4 of the 5 predominant PFGE profiles when we compared isolates collected in these 2 states to isolates in all other states combined. These results suggest that location bias did not affect the findings. This observation contrasts with results of our subanalysis of 2012 isolates, in which significant differences were noted in the predominant strains found in Vermont, Washington, and all other states combined. This finding could be caused by many factors, including clonal expansion within epidemic areas and, as previously noted, selective advantage of pertactin-deficient B. pertussis among vaccinated populations. Exploration of epidemiologic data associated with these isolates may further explain the observed geographic differences in PFGE profiles.

We did not detect a large increase in CDC010 during 2010–2012, such as was reported for BpSR10 during 2007–2009 in Europe, but instead detected a large increase in CDC237, first seen among US isolates in 2009. As shown, CDC010 and CDC0237 are extremely similar and cluster together in our dendrogram (Figure 4), which indicates that they are closely related. Possible explanations for differences in these profiles include a point mutation with the gain of a restriction site in CDC237 isolates or a rearrangement at the chromosomal level (23,35,36).

Similar to the findings for US isolates, the study in Europe also reported increased diversity (12). However, even though circulating PFGE profiles appear to be similar in the United States and Europe, percentages of pertactin-deficient isolates collected during 2010–2014 in European countries are much lower than in the United States, which suggests that even though PFGE changes and pertactin deficiency are occurring simultaneously in the United States, these changes are not necessarily linked and that virulence and transmission of pertussis depend on many factors (37,38).

A limitation of our study is that the differences in switch times and running time of our PFGE method prevents direct comparison with isolates tested by the European PFGE method (23). Our method results in low resolution of 6–8 small (45- to 125-kb) DNA bands, which are not included as part of our analysis, leading to fewer PFGE profiles overall when compared to the European method. However, by using the same PFGE method as in our previous study, we were able to directly compare 6,595 US isolates collected over 77 years. The profile changes observed in the course of the 2 studies have provided useful information for the development of current molecular typing systems and whole-genome sequencing strategies.

Our work reveals that B. pertussis PFGE profiles are changing rapidly in the United States, as they are in Europe (12). The previously held assumption that B. pertussis was a highly clonal organism has been challenged because recent isolates of B. pertussis have been shown to be quite variable at the genome level, particularly in those genes that code for ACV components (21,27,28). Although more emphasis is now being placed on molecular typing methods that do not require the availability of isolates, PFGE, in tandem with other typing methods, continues to remain a valuable tool for understanding B. pertussis because it can detect a greater level of diversity among circulating strains.

As we move more toward whole-genome sequencing and rearrangement analysis, PFGE can be useful for strain selection when genetic diversity is a desired parameter for analysis. Having a more complete picture of the molecular evolution of B. pertussis through whole-genome methods such as PFGE and sequencing may provide key data to help guide development of the next generation of pertussis vaccines or, in the near term, inform us on ways to more effectively use existing vaccines. Continued monitoring of the molecular epidemiology of circulating B. pertussis continues to be critical for understanding the changing epidemiology of the disease both in the United States and abroad to optimize current prevention and control strategies.

Ms. Cassiday is a research microbiologist in the Meningitis and Vaccine Preventable Diseases Branch, Division of Bacterial Diseases, National Center for Immunization and Respiratory Diseases, CDC. Her research focuses on Bordetella pertussis and Corynebacterium diphtheriae.

We gratefully acknowledge the following state health laboratories, who are former or current participants in CDC’s Emerging Infections Program Enhanced Pertussis Surveillance, for contributing most of the isolates used in this study: Arizona, California, Connecticut, Georgia, Massachusetts, Minnesota, New Mexico, New York, and Oregon. We also thank Hans Hallander of the Swedish Institute for Communicable Disease Control for the donation of the European B. pertussis type strains used in this study and Marina Chesnokova for technical assistance.