Taeniid tapeworms (Cestoda: Taeniidae) comprise 4 proposed genera: Taenia, Echinococcus, Hydatigera, and Versteria (1). Until recently, genetic data were absent for Versteria sp. in North America. However, in 2014, we reported an unusual case of fatal metacestode (larval stage of tapeworm) infection in a captive Bornean orangutan (Pongo pygmaeus); the causative agent was identified as a novel Versteria genotype (2).

As previously described (2), the orangutan was born at a zoo in Colorado, USA, and was rejected by his birth mother. Approximately 10 months later, he was transported to the Milwaukee County Zoo in Milwaukee, Wisconsin, USA, for adoption by a surrogate mother. At ≈5 years of age, he died unexpectedly from acute respiratory distress due to disseminated infection with an unknown agent. A combination of metagenomics and gene-specific DNA sequencing revealed the etiologic agent to be a previously unknown Versteria lineage in its larval form.

We obtained wild mustelids (carnivores of the family Mustelidae) from Colorado, near where the animal was born, and Wisconsin, near where the animal died. We targeted mustelids because they are definitive hosts of V. mustelae tapeworms in Europe (3) and V. brachyacantha tapeworms in Africa (4). Colorado samples were submissions to the Denver Museum of Nature and Science, and Wisconsin samples were obtained from a local fur trapper. We also examined mustelids from Oregon, USA, as part of an ongoing investigation of Versteria spp. tapeworms in the Nearctic region and Eurasia. 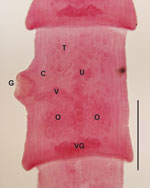 From 4 mustelids from Colorado (1 otter [Lontra canadensis], 2 ermine [Mustela erminea], and 1 mink [Neovison vison]), we recovered 1 adult tapeworm from a female ermine collected 178 km from where the orangutan was born. From 17 mustelids from Wisconsin (1 mink, 5 long-tailed weasels [M. frenata], and 11 ermine), we recovered 1 adult tapeworm from a male ermine collected 56 km from where the orangutan died. From 17 mustelids from Oregon (1 mink, 1 ermine, and 15 long-tailed weasels), we recovered 1 adult tapeworm from an adult mink of unknown sex. All tapeworm specimens were fragmented, lacking intact scolices, or both, which prevented complete morphologic description; however, microscope examination of mature segments from the Wisconsin and Oregon specimens revealed structures consistent with those of parasites in the genus Versteria (Figure 1).

Figure 2. Phylogenetic tree of members of the genus Versteria (Cestoda: Taeniidae). The tree was constructed from a DNA sequence alignment of cytochrome c oxidase subunit 1 genes. The maximum-likelihood method was used,...

To investigate the hosts from which adult tapeworms were recovered, we amplified and sequenced 751 bp of the mustelid cytochrome b (cytb) gene, using DNA extracts from adult tapeworm material. To do this, we used previously published methods (7,8) with modified PCR primers MVZ45_must_F (5′-CAGTNATAGCAACAGCATTCATAGG-3′) and MVZ14_must_R (5′-GCTCTCCATTTTTGGTTTACAAGAC-3′). This effort was successful, demonstrating that adult tapeworm material contains sufficient host-associated DNA for such analyses. The resulting sequences indicated that the ermine from Colorado and Wisconsin (GenBank accession nos. KT223030 and KT223032, respectively) belonged to the continental clade, which is broadly distributed across the Nearctic region (9). The sequence for the Oregon mink (GenBank accession no. KT223031) closely matched published sequences for other mink from North America but was otherwise phylogeographically uninformative.

We next assessed whether parasites of the genus Versteria were present in wild carnivores on and near the grounds of the Milwaukee County Zoo. We conducted systematic searches of the zoo grounds (i.e., outside of enclosures) for carnivore feces. We also trapped carnivores, using live traps baited with fish, and then immediately released them, collecting any feces deposited in the trap, and we collected feces from mink from a local wildlife rehabilitation center. These efforts yielded 51 samples (3 from skunks [Mephitis mephitis], 3 from coyotes [Canis latrans], 6 from long-tailed weasels, 8 from mink, and 31 from raccoons [Procyon lotor]), which we examined by microscope, using standard flotation and sedimentation methods to identify parasite eggs (Table 1). We then used the ZR Fecal DNA MiniPrep kit (Zymo Research, Irvine, CA, USA) to extract DNA directly from feces samples and amplified and sequenced the cox1 gene (2). Resulting sequences were unambiguous and revealed a diversity of parasites (not only taeniids, and in some cases representing putative novel lineages), but none matched Versteria spp. (Table 2).

Our results demonstrate that the genus Versteria is a species complex in North America. The new lineage identified in Wisconsin clusters with parasites formerly known only from Eurasia (Figure 2). Preliminary assessments suggest that this same lineage infects ermine as far away as the Northwest Territories (NWT) of Canada (E.P. Hoberg et al., unpub. data) and that the lineage responsible for fatal infection of an orangutan (2) also infects muskrats (Ondatra zibethicus) in Idaho, USA, and the NWT (A. Lavikainen et al., unpub. data). To the extent that current sampling reflects the distribution of Versteria lineages in North America, there appears to be a western lineage (represented by Colorado, Oregon, and Idaho, and the NWT) and a northern continental lineage (represented by Wisconsin and the NWT), with sympatry in the NWT. We note that this pattern parallels the phylogeography of ermine in North America, perhaps reflecting postglacial expansion of host and parasite after the Pleistocene (9). More Versteria lineages will likely be found, as evidenced by a novel lineage in zokor (Eospalax baileyi, a fossorial rodent) recently described from Tibet (10) (Figure 2). Versteria lineages have clearly entered the Nearctic region from the Palearctic region at least twice, probably reflecting Beringian biogeographic processes of faunal expansion that are important drivers of the evolution of mammals and the organisms parasitizing them (11).

Our findings shed light on the origins of the infection that proved fatal to the orangutan. We found an adult Versteria sp. tapeworm with a nearly identical DNA sequence in Colorado, where the orangutan was born; however, a Versteria sp. tapeworm from Wisconsin, where the orangutan died, was genetically divergent. Moreover, we found no evidence of Versteria tapeworms on the grounds of the Milwaukee County Zoo or nearby. Taeniid metacestodes encyst and can remain dormant for years before asexual multiplication (12). We therefore suspect that the orangutan became infected where it was born (Colorado) and carried the latent infection to where it died ≈4 years later (Wisconsin). This animal’s sudden progression to disease remains a mystery, perhaps indicating immune deficiency or another precipitating factor, consistent with reports of disseminated taeniid infection in other hosts (13).

In general, our findings underscore that exotic animals in zoo settings are susceptible to infections harbored by local wildlife and that transport of such animals can complicate inferences about the origins of these locally acquired infections. We reiterate that taeniid tapeworms of the genus Versteria should be considered a threat to captive apes (2), and we recommend that wild mustelids, such as ermine and mink, be excluded or removed from the grounds of zoos where apes have access to outdoor environments. Given the close relationship between apes and humans, we also suggest increased vigilance for zoonotic infections.

Ms. Lee is a veterinary student who participated in this research as part of the University of Wisconsin-Madison School of Veterinary Medicine’s Summer Scholars Program. Her interests include wildlife medicine, small animal medicine, and infectious disease.

This work was supported by the American Association of Zoological Veterinarians (award MSN173939). The funders had no role in study design, data collection and analysis, decision to publish, or preparation of the manuscript. Field collections in the Northwest Territories and broader explorations of diversity were conducted through the Collaborative Integrated Inventory of Biomes of the Arctic project, supported by the National Science Foundation (grants no. 0196095 and 0415668).