Congenital Trypanosomiasis in Child Born in France to African Mother

To the Editor: Sleeping sickness, or human African trypanosomiasis, is a neglected tropical parasitic infection transmitted by the tsetse fly bite. In central and western Africa, trypanosomiasis is caused by the Trypanosoma brucei subspecies gambiense. Chronic symptoms of the disease include neurologic impairment and sleep disorders (1). Infected children and adults can exhibit other nonspecific symptoms (1,2) attributable to biologic inflammatory syndrome, usually accompanied by an increase of IgM. Sleeping sickness can be fatal if left untreated (3). Although the efforts of the World Health Organization (WHO), national control programs, and nongovernmental organizations such as Médecins Sans Frontières have substantially reduced the global burden of human African trypanosomiasis, its current annual incidence is still estimated to be ≈10,000 new cases (1,4). Most cases occur during long stays in trypanosomiasis-endemic areas. Rare alternative routes of transmission are possible in nonendemic areas (e.g., through blood transfusion or organ transplantation) (5). We report the case of a 14-month-old boy infected with Tr. brucei through the transplacental route.

The child was referred to a pediatric care unit because of psychomotor retardation and axial hypotonia. His mother was from the Democratic Republic of the Congo (DRC) and had arrived in France 3 years earlier. The pregnancy, which had been initiated and monitored in France, was normal through delivery. Nonetheless, the newborn was placed with a foster family because his mother had vigilance disorders, aphasia, fluctuating hemiparesia and tetraparesia, convulsions associated with choreiform movements, anxiety, and severe depression. The foster family reported that the child did not smile and had been unable to grasp objects in the last 8 months. 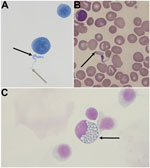 Figure. A) Cytological slide prepared from cerebrospinal fluid (CSF) from a child with congenital trypanosomiasis who was born in France to an African mother (Gram staining, original magnification ×1,000). B) Blood smear...

Video. (https://www.youtube.com/watch?v=q58QvQQOW9c) Direct observation of the cerebrospinal fluid from a child with congenital trypanosomiasis who was born in France to an African mother (fresh mount in a Malassez counting cell, original...

All the clinical and biologic findings were compatible with a diagnosis of autochthonous congenital trypanosomiasis in the meningo-encephalitic second stage. In addition to diffuse bilateral lesions of her white matter and biologic inflammatory syndrome, the mother also exhibited the same neurologic symptoms as the boy, at least since her last stay in DRC, a trypanosomiasis-endemic country that currently harbors ≈90% of new cases of African trypanosomiasis worldwide (6). She previously lived in Kinshasa and also reported a short visit into the bush in Angola. Until trypomastigotes were observed in her son’s CSF, the mother had not received a definitive diagnosis. She was thereafter invited for clinical and laboratory examination. Lumbar puncture and blood tests were then performed: Mott cells were present in her CSF, but no parasite was detected (Figure, panel C). Diagnosis of trypanosomiasis was subsequently supported by positive serologic test results (7).

The 2 patients were administered 400 mg/kg eflornithine monotherapy (difluoromethylornithine) daily for 2 weeks (8,9). The clinical outcome was globally satisfactory for the mother. Her serologic tests remained positive 8 months after treatment, which is long but not unusual, and confirms that serologic testing is unreliable for posttherapeutic follow up (4,7). Magnetic resonance imaging showed a substantial decrease of her brain lesions. Her son still exhibited serious neurologic sequelae, although trypomastigotes quickly disappeared from his CSF after treatment. He still had a restricted grip, axial hypotonia, and peripheral hypertonus 2 years later. To date, he has limited contact with his environment and is not able to stand up or eat alone.

Altogether, this case is exceptional for 2 reasons: 1) the diagnosis of human African trypanosomiasis in adults and children is very unusual in countries where the disease is not endemic (<100 cases are estimated to have occurred over a 10-year period) (10); and 2) congenital transmission seems to be extremely rare, even in Africa (2). To our knowledge, 17 probable cases of congenital trypanosomiasis have been reported to date, but only 14 were sufficiently described to confirm mother-to-fetus transmission (13 were attributed to Tr. brucei gambiense, and 1 was attributed to Tr. brucei rhodesiense, the eastern African subspecies) (2). Because not all official guidelines mention this route of transmission, the incidence of congenital trypanosomiasis is thought to be underestimated (4).

The diagnosis of human trypanosomiasis should always be considered for persons who have neurologic and sleep disorders and have spent time in sub-Saharan Africa as soon as infection is suspected. Congenital trypanosomiasis is rarely studied, and incidence data are limited; however, because this is another possible route of infection, even when infection of the fetus occurs long after infection of the mother, we believe congenital transmission occurs more often than suspected.

We thank Alex Edelman & Associates for scientific editing and translation of this article.

Page created: April 14, 2016
Page updated: April 14, 2016
Page reviewed: April 14, 2016
The conclusions, findings, and opinions expressed by authors contributing to this journal do not necessarily reflect the official position of the U.S. Department of Health and Human Services, the Public Health Service, the Centers for Disease Control and Prevention, or the authors' affiliated institutions. Use of trade names is for identification only and does not imply endorsement by any of the groups named above.

Congenital Trypanosomiasis in Child Born in France to African Mother