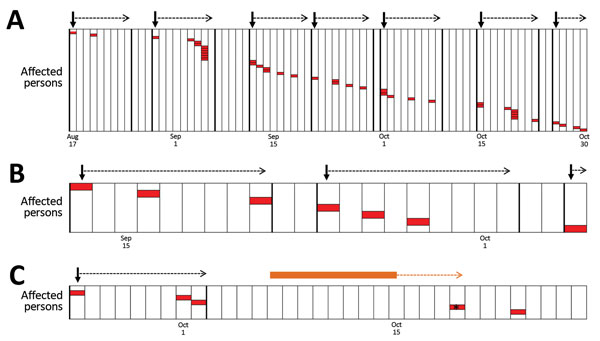 Figure 4. Reconstruction of monkeypox virus transmission events in the Democratic Republic of the Congo by using an estimated incubation period. Each column represents a calendar day. Red boxes represent a single case of monkeypox infection. A cluster is defined as a set of case-patients that could have resulted from a single exposure and are delimitated with dark vertical lines. Dark arrows indicate the first case within a cluster, and the dotted arrow indicates the time during which a potential single exposure could have produced symptoms in the first person in that group to the last (i.e., 5–13 days). A) Transmission events in the village of Bokungu in the Democratic Republic of the Congo. B) A household with evidence of 3 known transmission events. C) A household with evidence of 1 known and 1 unknown transmission event. The orange bar represents the days when the case-patient, represented by an asterisk (*), would be expected to have been exposed.