We report the characterization of Trypanosoma cruzi of southern South American origin among humans, domestic vectors, and peridomestic hosts in Colombia using high-resolution nuclear and mitochondrial genotyping. Expanding our understanding of the geographic range of lineage TcVI, which is associated with severe Chagas disease, will help clarify risk of human infection for improved disease control.

Chagas disease is the most common parasitic infection in Latin America, annually affecting ≈5–6 million persons and putting another 70 million at risk (1). The etiologic agent, Trypanosoma cruzi, displays remarkable genetic diversity, which is widely thought to contribute to the considerable biologic, epidemiologic, and clinical variation observed in regions where the disease is endemic (2). Seven discrete typing units (DTUs) are currently recognized (TcI–TcVI and TcBat) (2); TcV and TcVI are natural interlineage hybrids of TcII and TcIII (3). It is unknown whether these hybrids arose from multiple independent recombination events (3) or a single incidence of hybridization followed by clonal divergence (4). Molecular dating indicates these lineages evolved recently (<1 million years ago) (3,4), suggesting that genetic exchange may still be driving the emergence of novel recombinants (3,4).

Historically, most T. cruzi DTUs have had broadly distinct, but often overlapping, geographic and ecologic distributions (2). TcV and TcVI are largely confined to domestic transmission cycles and are sympatric with severe chronic and congenital human disease in southern South America (2). Increased sampling indicates that the geographic ranges of TcV and TcVI are more extensive than previously suggested. Putative domestic hybrid strains were identified recently as far north as Colombia (5); it is unclear whether these are bona fide TcV and TcVI isolates (suggesting long-range introduction) or progeny of a novel, independent, and local recombination event(s). Elucidation of the molecular epidemiology of TcV and TcVI has been complicated by limited sample collections and difficulties distinguishing these genotypes from their parental DTUs (6) and each other (7). We undertook high-resolution nuclear and mitochondrial genotyping of hybrid clones from Colombia to resolve their putative status as novel recombinants and provide further insights into the evolutionary origin(s) of TcV and TcVI. 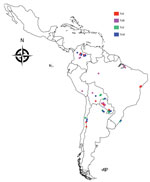 Figure 1. Geographic distribution of TcII, TcIII, TcV, and TcVI Trypanosoma cruzi clones, South America, 2002–2010. A total of 57 T. cruzi biologic clones were assembled for analysis. Of these, 24 were isolated...

Figure 2. Phylogenetic trees showing relationships between Trypanosoma cruzi hybrids from Colombia and reference T. cruzi strains from across South America. A) Unrooted neighbor-joining tree based on pairwise distances between microsatellite loci. B)...

For microsatellite loci, we defined sample clustering using a neighbor-joining tree based on pairwise distances between multilocus genotypes (Figure 2) (13). We calculated DTU-level heterozygosity (Bonferroni-corrected) and evaluated genetic diversity using sample size–corrected allelic richness and private allele frequency per locus (Table). To examine TcV/TcVI allele inheritance, we classified genotypes at each locus as hybrid (TcII/TcIII) or nonhybrid (TcII/TcII or TcIII/TcIII) based on the presence or absence of specific parental alleles (Technical Appendix 2).

All putative hybrids from Colombia were highly heterozygous and minimally diverse. They possessed TcII and TcIII alleles at an approximate 1:1 ratio and, compared with parental DTUs, they displayed fewer private alleles or single-nucleotide polymorphisms; these strains fulfilled all the expectations of progeny from a recent Mendelian hybridization event(s) (Table). Based on nuclear MLST and microsatellite data, all hybrids from Colombia were classified as TcVI, not novel recombinants.

Examination of TcII and TcIII alleles across 5 nuclear loci showed that hybrid haplotypes from Colombia were shared among other TcVI strains from the Southern Cone region of South America and showed negligible affinities to parental alleles from Colombia (Technical Appendix 1 Figures 1, 2). Microsatellite profiles also supported this allopatric inheritance: only a minority of private parental alleles from Colombia were common to local TcVI hybrids. At mitochondrial loci, TcVI clones from Colombia were noticeably divergent from local TcIII maxicircle haplotypes and those observed in reference TcVI strains (Figure 2). Of note, 1 hybrid from Colombia (AACf2 cl11), which was unequivocally classified as TcVI by both types of nuclear loci, possessed a TcV-type mitochondria. All isolates in this study were biologic clones, ruling out mixed infections as a potential confounder.

Overall, our data support the hypothesis that 2 separate recombination events led to the formation of TcV and TcVI. These interlineage hybrids have distinct nuclear and mitochondrial MLST genotypes and related but independent microsatellite profiles, and most alleles that distinguish between hybrid DTUs (70.4% [38/54 alleles]) were also present in their corresponding parental strains. Interlineage differences (fixed at 84% [21/25 of loci]) between TcV and TcVI are not consistent with allelic sequence divergence (Meselson effect); for such divergence, a much higher frequency of private alleles, compared with parental genotypes, would be expected at rapidly evolving microsatellite loci.

TcVI clones from Colombia had more private microsatellite alleles per locus (0.86) than their southern counterparts (0.43), despite their unequivocal origin in the Southern Cone. This phenomenon could be attributable to de novo mutations or a founder effect with respect to the northerly introduction of TcVI. Support for the latter cause is evidenced by an overall reduction in genetic diversity among hybrids from Colombia compared with TcVI strains from the Southern Cone (allelic richness 1.87 vs. 2.46, respectively). However, we cannot discount some sampling bias because reference Southern Cone strains represented a much wider geographic range.

A novel observation among TcVI strains from Colombia was the presence of an anomalous TcV maxicircle. This pattern of inheritance could reflect 1) recent mitochondrial introgression from TcV into TcVI, leaving undetectable signatures of nuclear hybridization by our markers or, possibly, none at all (10,14), or 2) potential backcrossing of TcVI into TcIII. Genetic exchange has not been described among hybrid DTUs, but it might be expected to be more permissive between closely related strains (14). We also isolated hybrid AACf2 cl11 from a dog. T. cruzi hybridization has been proposed to arise within mammalian cells (14), and mixed infections in such hosts are common. Alternatively, TcV and TcVI may have evolved from the beneficiaries of different alleles during a single hybridization event between heterozygous parents with mixed TcIII-type mitochondrial complements; although, to date, reported levels of mitochondrial heteroplasmy in T. cruzi are low (10).

Our understanding of the geographic and ecologic distribution of T. cruzi DTUs is changing because of parallel improvements in sampling strategies and genotyping techniques. Human Chagas disease in Colombia is currently associated with DTUs TcI, TcII (to a lesser extent), and oral outbreaks of TcIV (5). In this study, we isolated T. cruzi hybrids from 3 domestic triatomine vectors, a peridomestic dog, and congenital infections among local patients. Given that no reservoir hosts of TcV and TcVI have been described (15), the hybrids from Colombia are more likely the result of long-range anthropogenic introduction than local sylvatic invasion, especially considering the successful establishment of these DTUs among domestic infections in the Southern Cone. Further intensive sampling efforts in northern South America are warranted to elucidate the transmission cycle ecology of TcVI and to accurately assess the epidemiologic risk of human Chagas disease associated with this low-diversity hybrid lineage.

This research was supported by the Wellcome Trust and a European Commission Framework Programme project (Comparative epidemiology of genetic lineages of Trypanosoma cruzi, ChagasEpiNet; contract no. 223034). L.A.M. was funded by a BBSRC (Biotechnology and Biological Sciences Research Council) doctoral training grant.