To determine animal hepatitis E virus (HEV) reservoirs, we analyzed serologic and molecular markers of HEV infection among wild animals in Germany. We detected HEV genotype 3 strains in inner organs and muscle tissues of a high percentage of wild boars and a lower percentage of deer, indicating a risk for foodborne infection of humans.

Hepatitis E is an infection of public health concern, leading to an estimated global disease burden of 3.4 million acute cases, 70,000 deaths, and 3,000 stillbirths per year (1). Large disease outbreaks in nonindustrialized countries are mainly caused by drinking water contaminated with hepatitis E virus (HEV) (2). In industrialized countries, most cases of hepatitis E are sporadic and suspected to be a result of zoonotic HEV transmission from animals to humans (3). The numbers of notified hepatitis E cases have sharply increased in several European countries during recent years (4,5). Chronic HEV infections among recipients of solid organ transplants pose novel public health concerns (6).

HEV belongs to the family Hepeviridae, genus Orthohepevirus. Its RNA genome comprises 3 open reading frames (ORFs). ORF1 encodes a multifunctional nonstructural polyprotein with methyltransferase and RNA-dependent RNA polymerase genes often used for molecular typing. Human pathogenic HEVs are mainly classified into genotypes 1–4 (2,3). The camelid HEV genotype 7 was recently detected in a human (7), however. Although genotypes 1 and 2 infect only humans, genotypes 3 and 4 are zoonotic and infect different animal species and humans (2,3,8). HEV infection in animals is generally not associated with clinical disease.

The main animal reservoirs for genotype 3 are domestic pigs and wild boars, although infections among other mammals have been described (2,3,8). However, whether these animal species represent true HEV reservoirs or are accidental infections due to spillover events is unclear. In this study, we investigated serologic and molecular evidence of HEV infection in wild boars and different deer species during 2 hunting seasons in a hunting area in Germany. 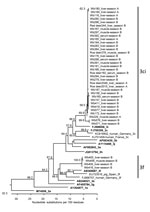 Figure 2. Phylogenetic relationship of HEV sequences derived from wild boars and deer from Germany, 2013–2015. The tree is based on a 280-bp fragment of the ORF1 (RNA-dependent RNA polymerase gene) region. The...

A total of 39 of 46 samples were positive in a nested RT-PCR assay targeting the RNA-dependent RNA polymerase gene in the ORF1 (Technical Appendix) that were suitable for sequencing. The amplicons showed nucleotide sequence identities to each other ranging from 73.6% to 100.0%. A phylogenetic tree set up for the samples together with HEV subtype reference strains indicated that most sequences cluster in a clade containing subtypes 3c and 3i (Figure 2). Within this clade, HEV sequences from wild boar and deer from both hunting seasons clustered very closely together. Four sequences from wild boars of season B clustered in genotype 3f. HEV isolates from human hepatitis E cases from Germany clustered near the wild boar and deer HEV sequences (nucleotide sequence identities up to 86.1% to a German 3f strain and 88.2% to a German 3c strain).

Using a nested RT-PCR assay targeting the methyltransferase gene in the ORF1 (Technical Appendix), we sequenced a PCR product in 18/46 samples. The nucleotide identities of the sequences ranged from 72.7% to 99.6%. A phylogenetic tree again showed grouping into HEV subtype clade 3ci and subtype 3f (Technical Appendix Figure 3). All sequences were deposited in GenBank (accession nos. KX455427–KX455478).

We detected HEV-RNA and HEV-specific antibodies in a high percentage of wild boars, with a significant difference between the 2 hunting seasons. The detection rates are consistent with previous reports of infection of wild boars in Germany (9–11). The data underline the high importance of this animal species in the epidemiology of HEV and indicate that wild boars likely represent a persistent reservoir for this virus. The detection of high amounts of HEV RNA in wild boar liver, other organs, and especially in muscle tissue highlights the high risk that HEV can be transmitted to humans through the consumption of meat from these animals that has not been cooked properly.

In contrast, only low percentages of samples from roe deer and red deer tested positive for HEV in our study. Data about HEV infection in wild ruminants in Europe are rare, but some reports have demonstrated HEV infection in several deer species (12,13). Neumann et al. (14) reported serologic and molecular evidence for HEV infection of the indigenous deer species in Germany. We detected HEV RNA in liver, in several organs, and in muscle tissue of the infected deer species. Sequence analysis showed a relationship of HEV from deer with human hepatitis E cases from Germany. In Japan, consumption of deer meat could be linked to acute hepatitis E cases in humans (15). Taken together, deer are likely to represent a source of HEV for humans, and consumption of undercooked deer meat should be considered a risk for acquiring HEV infection.

Analysis of the detected HEV sequences indicated that the same strains of genotype clade 3ci circulated in wild boar and deer species. This finding argues against specific HEV strains exclusively circulating in deer species; however, longer sequence parts or whole virus genomes should be analyzed in future studies to support this finding further. The consistently lower HEV RNA and antibody prevalence in deer than in wild boars indicates a primary circulation in wild boars and only accident transmission to deer. The hypothesis of spillover infections of deer is further supported by the consistent lower viral loads in tissues of infected deer. However, other authors classified deer as a true reservoir for HEV (8). Further studies investigating more geographic areas over longer time, including the parallel analysis of different animal species, are necessary to unravel the epidemiology and transmission dynamics of HEV in wildlife.

Dr. Anheyer-Behmenburg is a veterinary specialist for microbiology at the University of Veterinary Medicine, Hannover, Germany. She is interested in the epidemiology of emerging zoonotic diseases in wildlife. Her recent scientific work focused on HEV in wild animals.