West Nile virus (WNV) circulates between ornithophilic mosquitoes and birds. Birds are used as WNV sentinels, but in Africa, birds rarely die of infections, probably because of genetic resistance (1). Therefore, another animal is needed to predict risk for WNV disease in Africa. Humans and horses are considered incidental dead-end hosts for WNV (2). Although ≈20% of infections in these species are symptomatic, ≈1% of human cases involve neurologic disease, with 1%–10% fatality rates (3), but 90% of horse cases involve neurologic disease, with 30%–40% fatality rates (4). Monitoring equine populations living near human populations might enable prediction of human outbreaks in Africa (5).

WNV is endemic to South Africa (1). The largest human outbreak occurred in 1974 in Karoo (1); during 1983–1984, a smaller epizootic outbreak occurred in Witwatersrand (Gauteng Province) (6). During 2010–2011, screening of the cerebrospinal fluid of patients in hospitals in Gauteng Province indicated WNV was present in 3.5% of unsolved cases of neurologic disease, suggesting severe WNV cases might be missed because of a lack of clinical awareness of the pathogenic potential of this virus (7).

WNV isolates are divided into 2 lineages (8): lineage 1, which predominates in the Northern Hemisphere and Australia, and lineage 2, which is endemic to southern Africa and Madagascar and started emerging in central Europe in 2008 (9). Lineage 2‒associated encephalitis outbreaks have been occurring in Greece since 2010, causing hundreds of neurologic cases in humans (fatality rate 17%) and horses (3). Lineage 2 was first associated with severe neurologic disease in horses in South Africa in 2009 (8). Neurologic signs of infection in horses are similar for both lineages and include ataxia, weakness, recumbence, seizures, and muscle fasciculation (8,10). However, epidemiologic data are lacking.

South Africa conducts active surveillance for infectious pathogens in horses, such as African horse sickness virus (AHSV), to help the horse industry maintain disease-free status, as required by the World Organisation for Animal Health. Equine WNV is also a World Organisation for Animal Health‒listed disease, enabling researchers to use horses for WNV surveillance internationally. To assist with predicting WNV human cases and managing outbreaks in susceptible animals, we sought to define the epidemiology of WNV in horses in South Africa.

We prospectively investigated horses and other animals with fever or neurologic signs during 2008–2015 and compared the geographic range of WNV-positive animals with that of WNV-seropositive veterinarians involved in equine, wildlife, and livestock disease management during 2011‒2012 (11). A total of 210 veterinarians from all 9 South Africa provinces submitted blood, neurologic tissue, and visceral tissue specimens from horses (acquired during 2008–2015) and wildlife and livestock (acquired during 2010–2015) that displayed acute fever, neurologic disease, or other signs of acute infection, accompanied by their demographic and disease data, to the Centre for Viral Zoonoses, University of Pretoria (Pretoria, South Africa). A total of 1,407 samples (64% blood/serum, 25% tissue, 6% both blood/serum and tissue, 4% viral RNA) were received.

Figure 1. Seasonal occurrence of WNV in horses, South Africa, 2008–2015. Rainfall levels are indicated as a potential correlate for increases in the prevalence of the WNV mosquito vector Culex univitattus. WNV, West... 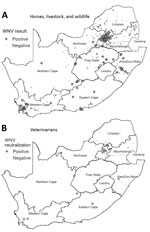 Most (77.2%) WNV cases occurred in Southern Hemisphere autumn (March‒May) (Figure 1), 2–3 months after peak precipitation. The interannual detection rate among horses was 2.1–12.7% (Table 1). Most specimens came from Gauteng (n = 400) and Western Cape (n = 296) Provinces (Figure 2, panel A). Most WNV-positive cases were from Gauteng Province (7.3%, 29/400), but detection rates were highest in Northern Cape (10.2%) and Eastern Cape (10.5%) Provinces. Of 152 samples from Limpopo and Mpumalanga Provinces, 99 of which came from wildlife species, none were WNV positive. The geographic distribution of WNV-seropositive veterinarians (11) was similar to that of WNV-positive horses (Figure 2, panel B).

This 8-year surveillance confirmed annual WNV outbreaks among horses in South Africa, most cases being lineage 2. The neurologic signs and fatality rate among WNV lineage 2‒infected horses correlated with those described for lineage 1 in Europe and the United States (4). Locally bred and imported horses appeared similarly susceptible to WNV neurologic disease. Younger animals were more likely to be infected, although all age groups had fatalities. Generalized neurologic signs, such as paresis and paralysis with death, positively correlated with WNV infection in horses. Fatal WNV encephalitis was diagnosed in a giraffe at Onderstepoort Veterinary Research (M. Romito, unpub. data), suggesting certain wildlife species in Africa might be more susceptible; however, we did not detect WNV-positive local wildlife in our sample. WNV-induced fetal death was recorded only once, with lineage 1 infection, but should continue to be monitored.

The geographic distribution of WNV is mainly dependent on favorable ecology, rainfall, and competent vectors. The range of Culex univitattus mosquitoes, the predominant WNV vector, correlated with the geographic distribution of equine cases in South Africa (6). The distribution of WNV exposure among horses correlated with that among humans (Figure 2, panels A, B), suggesting horses could serve as sentinels for human risk for WNV disease in South Africa. Horses have low WNV viremia, precluding them from transmitting infections and establishing epidemics in humans; however, those handling horse central nervous system tissue should do so with caution (15). Vaccination before the start of the rainy season could reduce the risk for WNV in horses.

In summary, surveillance for neurologic disease in animals across South Africa showed WNV lineage 2 as the primary cause of annual outbreaks, with high fatality rates in horses. Horses proved to be good sentinels for WNV in Africa and can be used to determine geographic and seasonal risk patterns for human WNV disease.

Dr. Venter is a professor of medical virology at the Centre for Viral Zoonoses, University of Pretoria, where she heads the Emerging Arbo and Respiratory Virus research group. She specializes in molecular epidemiology and One Health research to investigate zoonotic viruses, particularly neurologic and respiratory viruses, in Africa.

We thank all veterinarians and animal owners who submitted specimens for this study, as well as the staff members of the Equine Research Centre, University of Pretoria, and Onderstepoort Veterinary Institute; veterinary pathologists who collaborated with us to solve cases; and former research assistants and students.

The protocol was reviewed and approved by the Department of Agriculture Forestry and Fisheries in terms of Section 20 of the Animal Diseases Act (Act No. 35 of 1984) of South Africa and approved by the University of Pretoria Animal Ethics committee, IRB 0000 2235 IORG0001762. Funding was provided by cooperative agreement 1U19GH000571-01 with the Global Disease Detection Centre, US Centers for Disease Control and Prevention, Atlanta, Georgia, USA (2013‒2015). Part of this work was funded by the National Research Foundation of South Africa and the National Health Laboratory Services (2008‒2012).