Bourbon virus (BRBV) was first isolated in 2014 from a resident of Bourbon County, Kansas, USA, who died of the infection. In 2015, an ill Payne County, Oklahoma, resident tested positive for antibodies to BRBV, before fully recovering. We retrospectively tested for BRBV in 39,096 ticks from northwestern Missouri, located 240 km from Bourbon County, Kansas. We detected BRBV in 3 pools of Amblyomma americanum (L.) ticks: 1 pool of male adults and 2 pools of nymphs. Detection of BRBV in A. americanum, a species that is aggressive, feeds on humans, and is abundant in Kansas and Oklahoma, supports the premise that A. americanum is a vector of BRBV to humans. BRBV has not been detected in nonhuman vertebrates, and its natural history remains largely unknown.

Bourbon virus (BRBV) was first isolated from blood samples from a hospitalized male resident of Bourbon County, Kansas, USA (1). He was >50 years of age and previously healthy. Several days before becoming ill in late spring 2014, he reported several tick bites and an engorged tick on his shoulder. Initial symptoms included nausea, weakness, and diarrhea (1). On day 2 after symptom onset, he had experienced fever, anorexia, chills, headache, myalgia, and arthralgia. On day 4 after onset, he was hospitalized. Physical examination found a papular rash on his trunk. The patient had a temperature of 37.3°C and laboratory findings of leukopenia, lymphopenia, thrombocytopenia, hyponatremia, and increased levels of aspartate aminotransferase and alanine aminotransferase. He was treated with intravenous fluids and doxycycline for possible tickborne illness. Serologic assays for the causative agents of Rocky Mountain spotted fever, tularemia, brucellosis, babesiosis, and Q fever were negative, as were molecular tests for Ehrlichia spp. and Anaplasma phagocytophilum and blood smears for Babesia (1). The patient died 11 days after symptom onset.

Virologic tests on EDTA-treated blood and separated serum collected from the patient on day 9 after symptom onset were negative for Heartland virus (HRTV; family Bunyaviridae, genus Phlebovirus) (1), a recently described tickborne virus (2,3). However, during plaque reduction neutralization tests for HRTV antibody, heterologous (non-HRTV) viral plaques were observed. Subsequently, plaque assay results revealed distinct plaques 3 days after inoculation within wells inoculated with blood and serum (1). Electron microscopy of virus particles demonstrated filamentous and spherical particles consistent with the morphology of the family Orthomyxoviridae. Full-length sequencing and phylogenic analysis demonstrated that the virus was new, most closely but distantly related to the Old World virus Dhori virus, and a member of the genus Thogotovirus (1,4). This new virus was named Bourbon virus after the county of residence of the patient. BRBV is the first human pathogen of the genus Thogotovirus to be identified in the New World (4). 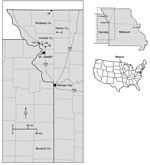 In response to the report of the fatal BRBV case from eastern Kansas in 2014, we retrospectively tested ticks for BRBV that were collected during spring and summer 2013 from 6 sites in northwestern Missouri, ≈240 km from Bourbon County (Figure 1). We had originally collected, identified, pooled, and processed these tick samples as part of an ongoing HRTV surveillance program (5). The goals of our retrospective analysis were to determine whether BRBV was present in the neighboring state of Missouri, to incriminate possible vector species, and to determine which life history stages are involved in virus transmission to humans.

We collected ticks at 6 sites in 3 counties of northwestern Missouri: Andrew, Gentry, and Nodaway (Figure 1). Five sites were properties owned by HRTV patients (sites 1, 2a, and 25–27), and 1 site (13b) was state recreational land, Honey Creek Conservation Area (5). Ticks were collected during three 1-week-long field trips in 2013; tick collections occurred on April 22–25, June 10–13, and July 22–25. We collected ticks primarily by flagging and secondarily by use of carbon dioxide–baited tick traps as described previously (3,5). We then froze the ticks on dry ice and shipped them to CDC (Fort Collins, CO, USA) for processing and testing.

We identified ticks to species, sex, and life history stage using microscopes on refrigerated tables and standard taxonomic references (5) and grouped them into pools by site, collection date, collection type, species, sex, and stage. We homogenized tick pools in 1 mL chilled bovine albumin-1 (BA-1) in glass TenBroeck grinders (Fischer Scientific, Pittsburgh, PA, USA) as described previously (3,5). After centrifugation, we removed a 125-μL aliquot of supernatant from each tick pool homogenate and placed the aliquot into an identically numbered tube for RNA extraction. The remaining homogenates were held at −80°C for future confirmatory testing.

We extracted RNA from a 100-μL sample removed from each aliquot tube using the QIAmp Virus BioRobot 9604 kit on a BioRobot Universal platform (both from QIAGEN, Valencia CA, USA) according to the manufacturer’s protocol. Sequence and reporter information for BRBV primer/probe sets nucleoprotein (NP) 1 and polymerase basic (PB) 1, which we used for virus detection and confirmation, respectively, are as previously described (4). We screened all samples for BRBV by using primer/probe set NP1 in a real-time reverse transcription PCR (rRT-PCR) as described for HRTV (5). Pools positive in the screening assay were confirmed by reextracting RNA from the original tick homogenate and performing the quantitative rRT-PCR with 2 primer/probe sets, primer/probe sets NP1 and PB1. We considered pools BRBV positive if crossing threshold scores for both primer/probe sets were <37.

To estimate the detection limit associated with a crossing threshold of 37, we spiked tick pools of specimens from an A. americanum colony with serial dilutions of BRBV, original strain (1,4). Pools comprised either 5 adult females or 25 nymphs and were ground in 1 mL BA-1. We tested 14 pools of adults and 14 pools of nymphs with each primer set.

Detection of BRBV in Ticks and Infection Rates

We tested an aliquot from all 3,073 tick pools from Missouri collections from 2013 by rRT-PCR using the screening primer/probe set NP1. Three pools were positive in the screening assay. Reextraction and testing of the original tick homogenates using both primer/probe sets NP1 and PB1 confirmed BRBV RNA in all 3 pools. All 3 tick pools yielded viable virus in cell culture. All 3 positive pools comprised A. americanum ticks (Table 2). One pool comprised 4 male adult ticks collected at site 2a on June 12; the other 2 pools each comprised 25 nymphs collected at site 27 on July 24.

To confirm the molecular identification of BRBV, we selected 2 pools, MO-2013-1246 of male adults and MO-2013-2499 of nymphs, for high-throughput sequencing and phylogenetic analysis. We deposited partial genomic sequence data in GenBank (accession nos. KY825740–KY825741). Analyses revealed 6 RNA segments for strain MO-2013-1246, as previously reported for the BRBV human strain (4). We conducted phylogenetic analysis on a 152-aa sequence of PB2 subunit of the polymerase protein (Figure 2) to assess relationships with the BRBV strain from the fatal human case and other selected members of the Orthomyxoviridae. The 3 BRBV strains form a lineage with 100% bootstrap support. The BRBV lineage is a sister group to, and mostly closely related to, Dhori virus. The BRBV-Dhori lineage appears as a sister group to a lineage of 4 tick-associated viruses and distantly related to the influenza viruses and Quaranfil virus.

We isolated BRBV from 3 pools of A. americanum ticks collected in northwestern Missouri: 1 pool of male adults and 2 pools of nymphs. The first detection of BRBV was from a fatal case in a man from nearby Bourbon County, Kansas (1); this man reported tick exposure and an engorged tick on his shoulder shortly before he became ill. Tick exposure combined with laboratory findings of leukopenia and thrombocytopenia suggested that BRBV might be transmitted to humans by ticks. Detection of BRBV in field-collected A. americanum ticks from Missouri supports the premise that A. americanum, a species that is aggressive, feeds on humans (8), and is abundant in Kansas and Oklahoma (9), the states where the 2 persons with BRBV infection resided, is a vector of BRBV to humans.

Tick transmission of BRBV also is consistent with our knowledge of the vector status and phylogenetic relationships within the genus Thogotovirus and related viruses in the family Orthomyxoviridae (Figure 2). Viruses that have been placed in the genus Thogotovirus include BRBV (1), Thogoto virus (10,11), Araguari virus (10,12), Dhori virus (10,11), Jos virus (10,13), and Upolu virus (13,14). To our knowledge, the closely related Aransas Bay virus (14) has not been placed in genus Thogotovirus. All of these viruses, except Araguari virus, which has been isolated only from vertebrates, are believed to be transmitted by a variety of hard and soft tick species (15–22). Of these tick-transmitted viruses (Figure 2), only Thogoto virus, Dhori virus, and BRBV have been associated with human disease (1,18), and only BRBV and Aransas Bay virus are known to occur in North America. Aransas Bay virus has been isolated from the soft tick Ornithodoros capensis, a parasite of seabirds (19,23).

Dhori virus, the virus most closely related to BRBV (4), is an Old World virus known from Europe, North Africa, and western and central Asia. Dhori virus has been isolated primarily from metastriate ticks (hard ticks other than genus Ixodes), including Hyalomma dromedarii, H. marginatum (reported as H. plumbeum plumbeum in the former Soviet Union), H. scupense, and Dermacentor marginatus (16,18,20,24). On rare occasions, Dhori virus also has been isolated from mosquitoes, including Anopheles hyrcanus (24), and from 1 mixed pool of Aedes caspius caspius and Culex hortensis mosquitoes collected near the Naryn River in Kyrgyzstan (20). Human disease associated with Dhori virus infection is characterized by acute illness with severe fever, headache, general weakness, and retrobulbar pain; encephalitis occurs in ≈40% of patients, and convalescence is long (2 months) (18). In addition, 5 laboratory infections resulting from aerosol exposure, 2 of which were characterized by encephalitis, have been reported (25).

Infection prevalence for BRBV in potential vectors remains poorly known; our interpretations are preliminary and await additional field studies. However, the very low infection prevalence for nymphs and varying rates for male adults suggest the possibility that other transmission cycles for BRBV might exist and that A. americanum ticks, although most likely an important vector to humans because of their aggressive host-seeking behavior and preference for medium and large mammals, might not be an important enzootic vector of BRBV. We hypothesize that A. americanum ticks acquire BRBV from occasional blood meals from >1 vertebrate hosts; that the virus successfully replicates and is transstadially transmitted in A. americanum ticks; and that A. americanum ticks transmit the virus to incidental hosts, such as humans. The pool of male adult A. americanum ticks, MO-2013-1246, also was positive for HRTV (5), suggesting some overlap in the transmission cycles of HRTV and BRBV. BRBV and antibodies to BRBV have not been detected in vertebrates, other than the 2 humans, and the natural history of the virus remains unknown.

Dr. Savage is a research entomologist at the Arboviral Diseases Branch, Division of Vector-Borne Diseases, National Center for Emerging and Zoonotic Infectious Diseases, Centers for Disease Control and Prevention, Fort Collins, Colorado. His research interests include the transmission dynamics of viruses vectored by mosquitoes and ticks.

We thank Jason Velez for HuH-7 cell production, formulation of media, and advice on use of this cell system. We are grateful to Michael Levin for providing colony A. americanum ticks used to generate experimental pools and to Mark Delorey for statistical analysis of the titer associated with crossing threshold cutoffs.