Using next-generation sequencing, we identified and genetically characterized a porcine astrovirus type 3 strain found in tissues from the central nervous system of 1 piglet and 3 sows with neurologic signs and nonsuppurative polioencephalomyelitis. Further studies are needed to understand the potential for cross-species transmission and clinical impact.

Astroviruses have been identified in a variety of mammals and birds; infection is often asymptomatic (1). Recently astroviruses have been implicated in cases of encephalomyelitis in humans, mink, cattle, and sheep (2‒5). We describe the use of unbiased next-generation sequencing to identify and genetically characterize a porcine astrovirus type 3 (PoAstV-3) in central nervous system (CNS) tissues of a 5-week-old piglet and 3 sows with neurologic signs and histopathologic lesions compatible with a neurotropic viral infection.

A multisite swine production farm submitted swine neurologic cases on 3 different occasions over a 9-month period to the Iowa State Veterinary Diagnostic Laboratory (Ames, Iowa, USA); 1 submission (2 live piglets) represented a population of 4–12-week-old pigs and 2 submissions (submission 2, two live sows; submission 3, head and tissue of sow) representing sows. In all cases, affected swine exhibited clinical signs that ranged from hind limb weakness to quadriplegia and occasionally convulsions (Video). The sow farm reported a case-fatality rate of 100%. The young pigs, which were farrowed from sows from the aforementioned sow farm, originated from 2 commercial grow-out facilities that reported a case-fatality rate of 75%. Histologic lesions in the CNS were consistent with a viral etiology. The following viruses were not detected in CNS samples by PCR: porcine reproductive and respiratory syndrome virus types 1 and 2, porcine circovirus 2, suid alphaherpesvirus 1, teschovirus A, sapelovirus A, or atypical porcine pestivirus. No pathogens were isolated by bacterial culture. Because of the persistence and severity of clinical signs, histologic lesions, and lack of detection of a viral etiology, two 5-week-old piglets and 4 sows with neurologic signs were submitted by a veterinarian for diagnostic testing by histopathology and next-generation sequencing. Histologic examination revealed severe, nonsuppurative polioencephalomyelitis in 3 of 4 sows and 1 of 2 piglets (Technical Appendix Figure). 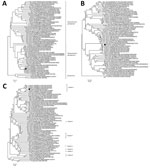 Phylogenetic comparisons of the capsid protein sequence, RNA-dependent RNA polymerase protein sequence, and whole-genome nucleotide sequence placed PoAstV3/USA/IA/7023/2017 in the same cluster as other strains of PoAstV-3 (Figure, panels A–C). The isolate we identified was most closely related to PoAstV3/USA/US-MO123 (GenBank accession no. NC_019494.1; 94.1% amino acid identity; Technical Appendix Table 1), which was detected in a swine fecal sample (9). On the basis of these phylogenetic analyses, PoAstV3/USA/IA/7023/2017 is more closely related to neurotropic astroviruses from humans, minks, cows, and sheep (2‒5) than to PoAstV-1, PoAstV-2, PoAstV-4, and PoAstV-5.

We describe the identification and genetic characterization of PoAstV-3 in CNS tissue from a piglet and sows with neurologic signs and histologic lesions compatible with a neurotropic virus similar to those described in neurotropic astrovirus cases in other species (2‒5). In humans, disease is primarily associated with immunocompromised patients. In cows, the virus is not commonly detected in feces, and the disease does not appear to be associated with immunocompromised animals (4). In this case, PoAstV-3 was not detected in feces of affected animals, and evidence of immunosuppression was lacking. The overall PCR prevalence of PoAstV-3 in feces of pigs in North America is reported to be low (1.2%) (10).

The PoAstV-3 we identified had 92.2% nucleotide sequence similarity to PoAstV-3 identified from a survey that evaluated feces samples from pigs (9).The significance of this finding is unclear. Investigations are needed to clarify the ecology and epidemiology of PoAstV-3 and the pathophysiology of neurotropic astroviruses. Studies have demonstrated the potential for recombination between porcine and human astroviruses, suggesting zoonotic potential (9,10).

Dr. Arruda is an assistant professor and diagnostic pathologist at the Iowa State University Veterinary Diagnostic Laboratory. Her primary field of research is the infectious diseases of swine.