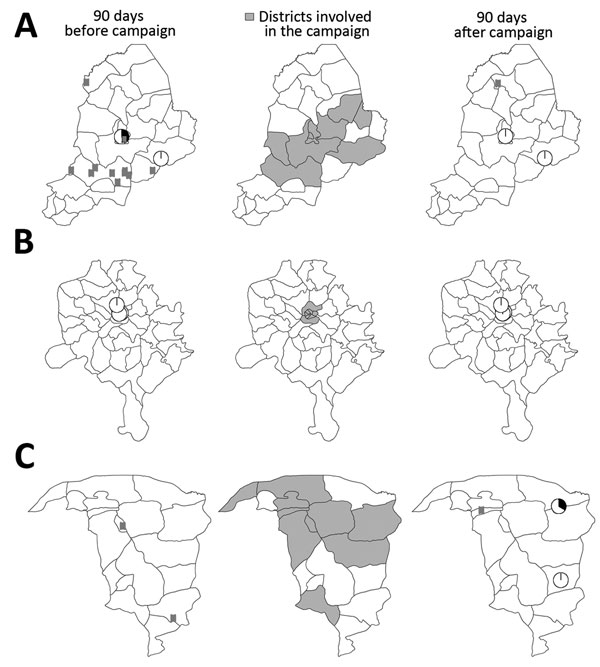 Figure 2. Data used to estimate the effect of inactivated poliovirus vaccine (IPV) campaigns in Nigeria. Maps show location of poliomyelitis cases associated with circulating serotype 2 vaccine–derived poliovirus (cVDPV2) and prevalence of this virus in the environment 90 days before and after campaigns with IPV plus trivalent oral poliovirus vaccine (IPV+tOPV) in Borno during June 2014 (A), Kano during March 2015 (B), and Yobe during November 2014 (C). Locations of cVDPV2 cases (rectangles) and environmental surveillance sites (pie charts) are plotted by district; locations within districts are plotted randomly. Pie charts are colored according to the proportion of environmental samples positive (black) or negative (white) for cVDPV2 during the 90-day period. cVDPV2, circulating serotype 2 vaccine-derived poliovirus IPV, inactivated poliovirus vaccine; tOPV, trivalent oral poliovirus vaccine. Publication of these maps does not imply the expression of any opinion whatsoever on the part of the World Health Organization concerning the legal status of any territory, city, or area or of its authorities or concerning the delimitation of its frontiers or boundaries.

Page created: November 16, 2016
Page updated: January 17, 2017
Page reviewed: January 17, 2017
The conclusions, findings, and opinions expressed by authors contributing to this journal do not necessarily reflect the official position of the U.S. Department of Health and Human Services, the Public Health Service, the Centers for Disease Control and Prevention, or the authors' affiliated institutions. Use of trade names is for identification only and does not imply endorsement by any of the groups named above.