Potentially Zoonotic Bartonella in Bats from France and Spain

We detected Bartonella in 11 of 109 insectivorous bats from France and 1 of 26 bats from Spain. These genetic variants are closely related to bat-associated Bartonella described in Finland and the United Kingdom and to B. mayotimonensis, the agent of a human endocarditis case in the United States.

Bartonellae have been identified in bats sampled in locations around the world where diverse chiropteran host species can interact with numerous Bartonella variants and potential arthropod vectors (1–3). Many Bartonella species are zoonotic, potentially affecting human and bat health (4). Bartonella spp. in bat populations of Europe are of particular interest because some variants described in Finland and the United Kingdom are closely related to Bartonella mayotimonensis, a species detected in the resected aortic valve of a 59-year-old endocarditis patient in the United States (5,6). To determine if potentially zoonotic bat-associated bartonellae are circulating elsewhere in Europe, we tested insectivorous bats from France and Spain for the presence of Bartonella spp.

We used OpenEpi version 3.01 (http://www.openepi.com/) to calculate descriptive statistics and CIs for prevalence data. We constructed phylogenetic trees by using the MrBayes plugin in Geneious version 8.1.7 with a Markov Chain Monte Carlo value of 1,100,000 and 100,000 burn-in length (8). We used the ggplot2 package in R (https://www.r-project.org/) to create spatial maps. 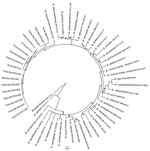 Figure. Phylogenetic analysis of citrate synthase (gltA) gene sequences of 12 Bartonella spp. variants detected in bats from France and Spain (underlined) compared with sequences from GenBank. All 12 of these variants...

All 12 Bartonella variants (GenBank accession nos. KY041981–KY041992) clustered closely with zoonotic B. mayotimonensis (Figure). Two sequences obtained from M. daubentonii bats sampled in Lorraine (GenBank accession no. KY041985) and Upper Normandy (GenBank accession no. KY041989), France, shared 100% nt identity with Bartonella strains previously isolated from bats of the same species in Finland and the United Kingdom (5,9). None of the Bartonella variants were closely related to Candidatus Bartonella naantaliensis or Candidatus Bartonella hemsundetiensis, which were also described in bats sampled in Finland (5,10). The absence of variants resembling these bartonellae from northern Europe suggests a spatial heterogeneity in the distribution of Bartonella spp. across bat populations and selective adaptations to specific host reservoirs.

Further research is needed to better evaluate the prevalence of zoonotic Bartonella species in western Europe and to determine if B. mayotimonensis, the agent of a US case of human endocarditis, is present across a broader range than currently documented. Future studies should consider specifically focusing on Nyctalus, Pipistrellus, and Myotis bat species, from which we most frequently detected variants similar to B. mayotimonensis.

Dr. Stuckey works in the Department of Population Health and Reproduction at the University of California Davis School of Veterinary Medicine. His research interests include disease ecology and epidemiology of zoonoses.

Potentially Zoonotic Bartonella in Bats from France and Spain