Genetically divergent filoviruses detected in Rousettus and Eonycteris spp. bats in China exhibited 61%–99% nt identity with reported filoviruses, based on partial replicase sequences, and they demonstrated lung tropism. Co-infection with 4 different filoviruses was found in 1 bat. These results demonstrate that fruit bats are key reservoirs of filoviruses.

Bats have been implicated as natural reservoirs for filoviruses (2,3) on the basis of serologic evidence from 19 bat species in 8 countries across Asia, Africa, and Europe (2,4–9). In addition, filovirus RNA has been detected in 8 bat species from 7 countries in the same regions (2–4,10–13). Outbreaks of Marburg hemorrhagic fever among miners in Uganda in 2007 were traced to bat MARV (11). In addition, we previously discovered filovirus antibodies in several bat species in China (14). This finding was further confirmed by He et al., who detected filovirus RNA in brown fruit bats (Rousettus leschenaultii) in China (10). Considering the diversity of bat species in the world, long-term surveillance of bat filoviruses is essential for better understanding of distribution, diversity, and ecology of these viruses. We conducted a study to determine the diversity of filoviruses among bats in Yunnan Province, China. 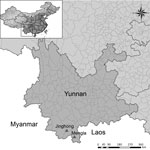 We captured 150 apparently healthy adult bats from 2 caves in Yunnan Province, China: 1 in Jinghong City in November 2009, and 1 in Mengla County in December 2015 (Table 1; Figure 1). The bat species we collected were Hipposideros armiger, Aselliscus stoliczkanus, Myotis ricketti, Rhinolophus Monoceros, Miniopterus fuscus, Ia io, Eonycteris spelaea, and Rousettus sp. We humanely killed all bats and collected their hearts, intestines, lungs, spleens, kidneys, livers, brains, and blood for testing. We used 2 methods to analyze bat lung tissues for presence of filovirus RNA: first, we used nested PCR with the primers FV F1/R1 and FV F2/R2 (10), and next, we used quantitative PCR (qPCR) with 3 groups of qPCR with primers and probes designed from viral sequences obtained in this study (Technical Appendix Table). 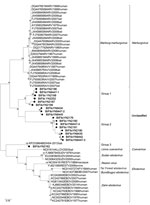 Figure 2. Phylogenetic analysis of filovirus isolates collected in study of genetically diverse filoviruses in Rousettus and Eonycteris spp. bats in China, compared with reference isolates. Analysis was based on a 310-bp segment...

To determine the tissue tropism of these viruses, we performed qPCR with primers and probes designed for each of the 3 different groups (online Technical Appendix Table). Results showed that filoviruses were mainly located in the lung and that genome copy numbers ranged from 29 to 523,582/mg of tissue (Table 2). Only 2 bat blood samples (nos. 2202 and 9447) were positive for filovirus RNA; 5 samples (nos. 2202, 2188, 9434, 9442, and 9447) contained filoviruses with more widespread tissue tropism. We were unable to isolate virus from PCR-positive samples by using Vero-E6 cells.

To detect filovirus IgG and IgM, we expressed His-tagged truncated nucleoproteins from RESTV or ZEBOV in Escherichia coli and used them as antigens (online Technical Appendix). In this experiment, we used 25 bat samples from 2015 that had enough serum volume for testing; 14 samples showed a strong cross-reaction with the ZEBOV nucleoprotein, and among them, 7 showed a weak cross-reaction with RESTV nucleoprotein. We used Western blotting to confirm these results; 11 of the 25 samples were positive for ZEBOV nucleoprotein and 4 for RESTV nucleoprotein (Table 1; Technical Appendix Figure 2). No samples overlapped between those identified as positive by PCR and those identified as positive by serologic testing. Results of a serum neutralization assay with HIV pseudovirus carrying the ZEBOV glycoprotein showed that the ELISA-positive samples had no cross-neutralization activity to the pseudovirus (14).

We detected novel filovirus sequences with high divergence in E. spelaea and Rousettus sp. bats in China. Phylogenetic analysis of partial sequences suggested that at least 3 distinct groups of filovirus are circulating in fruit bats in China. The distances between these sequences indicates that the 3 groups may represent 3 novel species or genera. Of interest, we detected antibodies reacting more strongly to ZEBOV than RESTV nucleoprotein in some filovirus RNA–negative samples, suggesting that the bats were infected with another/other filovirus(es) cross-reactive with ZEBOV nucleoprotein or that nucleoproteins of the novel filoviruses were cross-reactive with ZEBOV and RESTV nucleoproteins.

The bat samples in this study were collected from 2 caves in 2009 and 2015, respectively; the caves are ≈200 km metric apart. Across the 2 different years and locations, we detected closely related viruses and found 1 bat that was acutely co-infected by 4 different filoviruses; this finding suggests that these viruses have been circulating in the 2 bat species and that densely populated bat caves provide opportunity for cross-infection with different viruses. However, considering the migration ability of the fruit bat, we cannot exclude the possibility that there are exchanges of virus between the bats in these two caves. Longitudinal surveillance with tracking tags may help to better understand the spatial–temporal distribution of these viruses in bat populations.

These results will be helpful in providing a better understanding of the distribution and diversity of filoviruses, which may have implications for public health. Considering their feeding habitats, fruit bats are often in close contact with domestic animals and human populations. It is therefore necessary to establish long-term and proactive surveillance of these viruses and related diseases.

Dr. Yang is as a research assistant at Wuhan Institute of Virology, Chinese Academy of Sciences. His primary research interests include viral epidemiology and viral characterization of small mammals.

This work was funded by a joint National Natural Science Foundation of China grant (81290341) and the China Mega-Project for Infectious Disease grant (2014ZX10004001-003) from the Minister of Science and Technology of the People’s Republic of China (to Z-L.S.); a Scientific and Technological Basis Special Project grant (2013FY113500; to Z-L.S. and Y-Z.Z.); a National Natural Science Foundation of China grant (81260437) and State Key Laboratory for Infectious Diseases Prevention and Control grant (2013SKLID302) (to Y-Z.Z.); and a United States Agency for International Development Emerging Pandemic Threats PREDICT project grant (cooperative agreement AID-OAA-A-14-00102; to P.D.D.).