Scarlet fever is a common disease caused by group A Streptococcus (GAS; also known as Streptococcus pyogenes). In the Far East and the United Kingdom, the incidence of scarlet fever has been increasing since 2008 (1–3), and according to the Infectious Disease Statistics System of Korea, the incidence rate for scarlet fever in South Korea increased from 0.3 cases/100,000 persons in 2008 to 13.7 cases/100,000 persons in 2015 (https://is.cdc.go.kr/dstat/index.jsp).

Several antimicrobial drugs, including β-lactams and tetracyclines, effectively treat scarlet fever, and macrolides and lincosamides can be used in patients with penicillin (β-lactam) allergy (4,5). However, resistance to erythromycin and clindamycin has been reported for GAS isolates in mainland China and Hong Kong, China (2,3). The streptococcal M protein and exotoxins are 2 of several virulence factors in GAS (6). The streptococcal M protein is a long fimbrial adhesion protein encoded by >220 M protein gene sequence types (emm types). Because of the high genetic variability of emm, which varies by geographic region, molecular emm genotyping is mandatory for epidemiologic investigations of GAS infections (7). The incidence of these infections is closely related to variations in the predominance of certain emm types (7). speA and speC, which are 2 of 11 genes encoding for superantigens found in GAS, are often associated with scarlet fever (8). Our objective was to identify the overall trend in the annual incidence and characteristics of scarlet fever in South Korea by studying its upsurge in Gwangju, South Korea, because incidence during the past 8 years was highest for this city (https://is.cdc.go.kr/dstat/index.jsp). 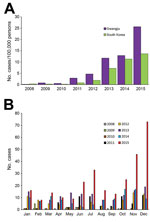 During 2008­–2015, we collected 1,460 pharyngeal swab samples from patients suspected of having scarlet fever from 8 major hospitals in the Gwangju metropolitan area. We tested the β-hemolytic isolates for susceptibility to bacitracin (0.04 U) and for streptococcal grouping; a total of 705 samples were positive for GAS. 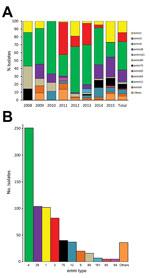 Figure 2. emm type characterization of group A Streptococcus isolates from patients with scarlet fever, Gwangju, South Korea, 2008–2015. A) Annual fluctuations of emm types. Number of isolates by year: 7 in 2008,...

Because variation in the circulating emm types could contribute to the incidence of disease and changes in the epidemiology of scarlet fever, we determined the emm sequence type for the 705 samples by using a standard protocol (https://www.cdc.gov/streplab/protocol-emm-type.html) (2). A total of 11 different emm sequence types were identified (Figure 2, panels A and B). emm4 (35.6%, 251/705) was the most predominant. The other 3 predominant emm types were emm28 (14.8%, 104/705), emm1 (14.5%, 102/705), and emm3 (11.6%, 82/705), and these 4 emm types accounted for ≈76.5% (539/705) of all isolates. These results differed from those of previous studies in mainland China and Hong Kong, where the outbreaks of scarlet fever were caused mainly by emm12 (2,3). Our results showed that emm3 in 2011 (the year incidence began increasing in South Korea) and emm1 and emm28 in 2015 (the year of a sharp increase in incidence) played major roles in the epidemics in the Gwangju metropolitan area (Figure 2, panel A). To our knowledge, emm3 has not been reported to be prevalent in other Asian countries but has been associated with scarlet fever in the United Kingdom (9).

GAS remains universally susceptible to β-lactams and glycopeptides. However, the rates of resistance against the macrolides and lincosamides used in penicillin-allergic patients have increased (11). We performed susceptibility tests by using the disk-diffusion method as recommended by the Clinical and Laboratory Standards Institute (12). For all samples collected 2008–2015, the antimicrobial agents chloramphenicol, tetracycline, erythromycin, and clindamycin were tested. Resistance to antimicrobial drugs was detected in 9.1% (64/705) of isolates: 0.3% of the isolates (2/705) showed resistance to chloramphenicol, 7.0% (49/705) to tetracycline, 3.0% (21/705) to erythromycin, and 2.8% (20/705) to clindamycin (Table).

In some isolates, antimicrobial drug resistance is tightly correlated with specific emm types (13). Resistance to erythromycin, clindamycin, and tetracycline is common in bacteria with the emm28 gene. In our study, 18/104 (17.3%) isolates that harbored emm28 were resistant to erythromycin, clindamycin, or tetracycline (p<0.01). Of all emm types, emm28 accounted for 71.0% (44/62) of all cases of resistance to these 3 antimicrobial drugs. In our study, 16/44 isolates harboring emm28 showed resistance to >2 antimicrobials. emm28 isolates in France were also found to be associated with multidrug resistance (13,14). Furthermore, in 2015, we found sharp increases in intermediate tetracycline resistance mainly in isolates harboring emm1 (57.9%, 22/38). Tetracycline resistance associated with emm12 and emm1 isolates was also found in scarlet fever patients in Hong Kong and China (3,15).

This study has a limitation. We collected samples from only 1 city in South Korea, the Gwangju metropolitan area. Because of the genetic diversity of GAS, our results should not be applied to other countries, even those nearby. However, we do believe that our data are representative of South Korea.

This study was supported by the infectious disease surveillance project from the Health and Environment Research Institute of Gwangju and the Korea National Institute of Health, South Korea.

Page created: March 16, 2017
Page updated: March 16, 2017
Page reviewed: March 16, 2017
The conclusions, findings, and opinions expressed by authors contributing to this journal do not necessarily reflect the official position of the U.S. Department of Health and Human Services, the Public Health Service, the Centers for Disease Control and Prevention, or the authors' affiliated institutions. Use of trade names is for identification only and does not imply endorsement by any of the groups named above.