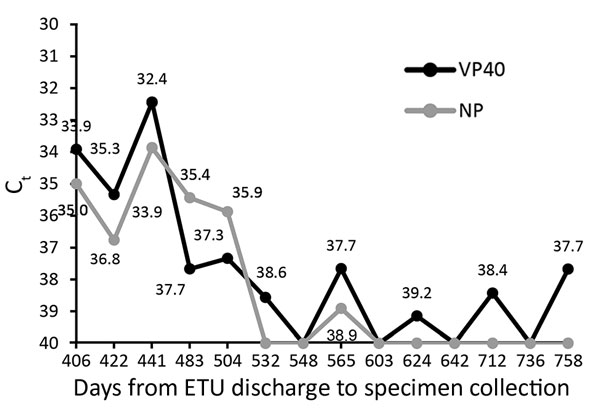 Figure. Ebola virus RNA detected by RT-PCR in semen samples from an HIV-positive survivor (48-year-old man) of Ebola virus disease, Monrovia, Liberia, 2009–2016. RT-PCR cycle threshold (Ct) values for Ebola virus VP40 and NP gene targets are reported by days from the patient’s discharge from the ETU to collection of a semen specimen. A gene target is considered detected if the Ct is <40. If gene amplification is not demonstrated within 40 cycles, then the gene target is considered undetectable and no Ct is reported. All undetectable results are indicated as Ct values of 40. CD4 cell counts per microliter were 46 on October 20, 2009; 48 on November 12, 2009; 358 on March 25, 2010; 358 on April 22, 2010; 563 on November 22, 2010; 824 on January 22, 2013; 459 on April 24, 2014; and 529 on August 9, 2016. The patient had a CD4 cell count of 529/μL 699 days after discharge from the Ebola treatment unit. On November 12, 2009, the patient was given an ART regimen of zidovudine/lamivudine/nevirapine. On April 22, 2010, the ART regimen changed to zidovudine/lamivudine/lopinavir plus ritonavir. ART, antiretroviral therapy; Ct, cycle threshold; ETU, Ebola treatment unit; NP, nucleoprotein, RT-PCR, reverse transcription PCR; VP40; viral structural protein 40.