In May 2016, a highly pathogenic avian influenza A(H5N8) virus strain caused deaths among 3 species of wild migratory birds in Qinghai Lake, China. Genetic analysis showed that the novel reassortant virus belongs to group B H5N8 viruses and that the reassortment events likely occurred in early 2016.

Since 2003, the A/Goose/Guangdong/1/96 lineage (Gs/Gd-lineage) of highly pathogenic avian influenza (HPAI) A(H5N1) viruses has been evolving into diverse clades and subclades (1). A novel subclade of HPAI A(H5N8), 2.3.4.4, which evolved from a clade 2.3.4 H5N1 variant, was initially isolated from domestic ducks in eastern China in 2010 (2) and caused outbreaks in domestic ducks and migratory birds in South Korea in early 2014 (3,4). In late 2014, several countries in Europe and East Asia experienced an invasion of HPAI H5N8 virus (5). This HPAI H5Nx (H5N8, H5N2, and H5N1) lineage subsequently emerged in North America, causing fatalities among wild birds and outbreaks in domestic poultry (5).

Available evidence strongly suggests that the HPAI H5N8 subclade 2.3.4.4 viruses were introduced and spread across the globe by migratory birds (6–8). Currently, 2 distinct H5N8 virus groups have been identified: group A (Buan2-like) and group B (Gochang1-like) (3). Group A H5N8 viruses predominate and have further evolved into 3 distinct subgroups: icA1, icA2, and icA3 (6). We report the emergence of a group B H5N8 virus in Qinghai Lake, China, a key breeding and stopover site for waterfowl along the Central Asian Flyway. 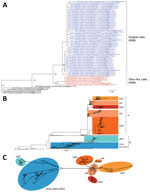 In the first 9 days of the outbreak, multiple organs (brain, intestine, liver, lung, pancreas and kidney) were collected aseptically from 18 bar-headed geese, 6 brown-headed gulls, and 1 great black-headed gull. We inoculated 10-day-old chicken embryos with the homogenates of these organs for virus isolation. Almost all organs analyzed were positive for influenza virus, and we detected only H5- and N8- subtype-specific strains.

We sequenced full-length genomes and found the polybasic amino acid sequence, REKRRKR*GL in the hemagglutinin (HA) cleavage site, confirming the virus can be classified as highly pathogenic. Sequences of 48 Qinghai Lake H5N8 influenza isolates (QH-H5N8) were deposited into the GISAID database (http://www.gisaid.org) under accession nos. EPI774110–EPI774510.

Sequence comparisons showed high nucleotide identity among all 8 gene segments of the QH-H5N8 isolates (>99.2 %; data not shown), indicating that the isolated strains are descendants of a common ancestral virus. A BLAST search (https://blast.ncbi.nlm.nih.gov/) suggested that QH-H5N8 is a reassortant virus (Technical Appendix Table 1) and that the HA, neuraminidase (NA), and nonstructural protein (NS) genes of QH-H5N8 share high nucleotide identity (>99.1%) with those of the H5N8 virus that circulated among poultry in eastern China in 2014 (A/duck/Eastern China/S1109/2014[H5N8]). The remaining internal genes share high nucleotide identity with those of the low pathogenicity avian influenza (LPAI) viral pool in waterfowl from Mongolia and other regions (Technical Appendix Table 1).

Phylogenetic analysis confirmed that the 8 segments had different origins. In the HA, NA, and NS phylogenetic trees, the QH-H5N8 virus clustered with H5N8 viruses isolated in late May 2016 from wild waterfowl at Ubsu-Nur Lake (UN-H5N8), forming a monophyletic cluster (Figure 1, panel A; Technical Appendix Figure 2, panels D, F, H). Unlike the H5N8 strains previously described in South Korea in 2014–2015 (Buan2-like, group A), this cluster fell within group B (Gochang1-like) H5N8 viruses, forming a novel subgroup, intracontinental group B (icB1) (Figure 1, panel B; Technical Appendix Figure 2, panel D). Neighbor-joining phylogenetic network analysis of the HA segment of the clade 2.3.4.4 H5 viruses also supported the finding that the QH-H5N8 and UN-H5N8 strains form a monophyletic cluster and appear to have evolved independently from group A H5N8 viruses (Figure 1, panel C).

Phylogenetic trees constructed by using sequences from the internal genes (all but polymerase basic 1 [PB1]) show that QH-H5N8 and UN-H5N8 viruses are closely related to various LPAI viruses circulating in aquatic birds in Mongolia in 2015. The PB1 gene, however, originated from various LPAI viruses dispersed across a relatively large geographic region (East and South Asia) over a long period (2010–2015) (Technical Appendix Figure 2).

We show that a group B H5N8 virus emerged in Qinghai Lake, China, causing deaths in wild migratory birds. Phylogenetic analysis indicates that the QH-H5N8 virus is the descendant of an unidentified triple-reassortant strain (Figure 2). The reassortment event may have occurred in waterfowl, and can be traced back to early 2016. However, we cannot infer the geographic region where the reassortant virus was generated, because the gene constellation of the virus originated from different locations.

The absence of domestic poultry in the vicinity of Qinghai Lake strongly suggests that the virus was introduced to the area by wild birds. The deaths in Qinghai Lake occurred during May−June 2016, which corresponds with the breeding season for the affected species. In late May 2016, similar H5N8 strains were detected in wild migratory birds at Ubsu-Nur Lake, 1,600 km north of Qinghai Lake (9,10). This finding suggests that the early summer movement of wild migratory birds from unknown southern sites to northern breeding grounds resulted in the introduction of H5N8 to Qinghai Lake and to Ubsu-Nur Lake, infecting a diverse population of breeding waterbirds.

Currently, we know of 3 HPAI H5N1 virus clades that have been introduced to wild migratory birds in Qinghai Lake, which is located near multiple migratory flyways: clade 2.2 in 2005 (11,12), clade 2.3.2 in 2009 (13,14), and clade 2.3.2.1c in 2015 (15). On all 3 occasions, similar viruses were subsequently detected in other regions. Therefore, when wild birds left the breeding location for their wintering sites in the autumn of 2016, H5N8 virus could potentially have spread to other regions along the flyway. HPAI H5N8 viruses have already caused fatalities among wild birds or poultry in South Asia, Europe, the Middle East, and Africa (http://www.oie.int/) since late October 2016. Available genetic information shows that H5N8 strains isolated in other countries are highly similar to the QH-H5N8-like virus, suggesting that the QH-H5N8-like viruses may have already disseminated to other areas along the migratory flyways.

Mr. Li is a postgraduate student at CAS Key Laboratory of Special Pathogens and Biosafety of Chinese Academy of Sciences. His primary research interest is the epidemiology of influenza viruses.

We thank the data submitters from the GISAID for their H5N8 sequences.

This study was supported by grants from the Special Project of Ministry of Science and Technology (2013FY113500), National Natural Science Foundation of China (31570026), intramural special grant for influenza virus research from the Chinese Academy of Sciences (KJZD-EW-L09 and KJZD-EW-L15), the Ministry of Science and Technology of China 973 Project (2015CB910501), and the Sanming Project of Medicine in Shenzhen (ZDSYS201504301534057). G.F.G. is a principal investigator in the National Natural Science Foundation of China Innovative Research Group (81321063). W.S. was supported by the “Taishan Scholar” project of Shandong Province. Y.B. is supported by the Youth Innovation Promotion Association of Chinese Academy of Sciences. G.W. is the recipient of a Banting Postdoctoral Fellowship from the Canadian Institutes of Health Research and the President's International Fellowship Initiative from the Chinese Academy of Sciences.