Increased Neurotropic Threat from Burkholderia pseudomallei Strains with a B. mallei–like Variation in the bimA Motility Gene, Australia 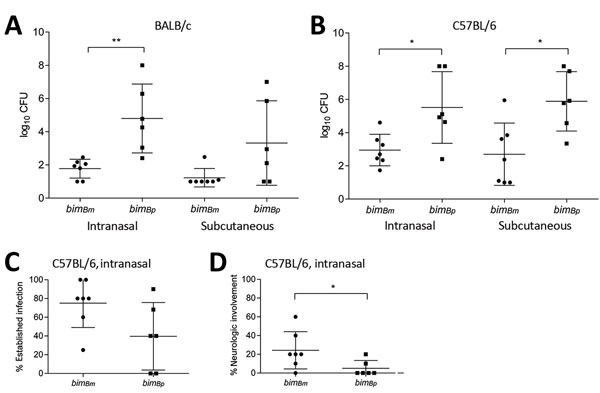 Figure 1. Virulence of bimBm and bimBp Burkholderia pseudomallei isolates. Day 21 50% infectious dose values after intranasal and subcutaneous infection of BALB/c (A) and C57BL/6 (B) mice with bimBm (n = 7) and bimBp (n = 6) B. pseudomallei isolates. Groups of 5 mice were inoculated via intranasal and subcutaneous routes at 10-fold increasing doses of B. pseudomallei, ranging from 100 CFU to 107 CFU. Virulence of bimBm isolates was significantly greater for both mouse strains, regardless of the infection route. Data are expressed as mean log10 CFU +SD. C57BL/6 mice (n = 10) were infected with bimBm (n = 7) and bimBp (n = 6) B. pseudomallei isolates at equivalent doses (104 CFU) and monitored for 21 days postinfection. The percentage of mice for a given bacterial strain for which evidence indicated establishment of B. pseudomallei infection (culture-positive growth from tissues) (C) and signs of neurologic involvement (e.g., head tilt, spinning behavior, and hind leg paresis) (D) was increased for animals exposed to bimBm compared with bimBp isolates. *p<0.05; **p<0.01.