Mycobacterium gordonae is often regarded as a weak pathogen that only occasionally causes overt disease. We report a case of M. gordonae infection in the facial skin, nasal mucosa, and paranasal sinus in an immunocompetent patient and review previous cases. The T-SPOT.TB test might be useful in diagnosing such cases. 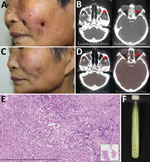 In March 2016, a 60-year-old woman with no history of tuberculosis or immunosuppression sought treatment for a 2-year history of asymptomatic facial ulcers and intermittent nosebleeds. The primary lesion was a small erythema on the left cheek that, without incurring trauma, developed into an ulcer. The condition gradually worsened. One year before visiting our hospital, she received a diagnosis of lupus erythematosus; she had also been referred to otorhinolaryngology, where she was treated unsuccessfully with nasal endoscopic surgery. The skin lesions were erythematous, covered with yellow crusts, and on both sides of the patient’s face (Figure, panel A). A nasal examination revealed small scabs in the nasal vestibule. Lymph nodes were not palpable.

Laboratory test results indicated the patient was negative for autoantibodies and HIV. A computed tomography (CT) scan of the paranasal sinuses showed ethmoid and maxillary sinusitis (Figure, panel B). Histologic examination indicated that a large number of lymphocytes, a few histiocytes, and plasma cells had infiltrated the lesion (Figure, panel E). Periodic acid-Schiff and acid-fast stains were negative for bacteria, and tissue culture was negative for fungus. Mycobacterial infection was suspected, but because mycobacteria are slow-growing, another test was needed to inform clinical practice. An alternative diagnostic test, the T-SPOT.TB (Oxford Immunotec Ltd., Oxford, England), an interferon-γ release assay, was performed and showed positive results (tuberculosis [TB] antigen – Nil = 20; >6 was positive). After 3 weeks of culture at 32°C in Löwenstein–Jensen medium, smooth, creamy, yolk-yellow bacteria were observed (Figure, panel F). Ziehl–Neelsen staining indicated they were acid-fast bacilli. Sequence analysis of 16S rRNA revealed a 99% similarity with M. gordonae strain Y27, and the hsp65 gene showed a 100% similarity with M. gordonae strain FJ09081. Further sequence analysis showed 16S rRNA was 99% homologous and hsp65 96% homologous with M. gordonae ATCC 14470. The diagnosis of M. gordonae infection was made.

A drug sensitivity test showed that the isolate from the patient was sensitive to clarithromycin, ethambutol, and moxifloxacin but less sensitive to rifampin, rifabutin, and isoniazid (4). No adverse drug reactions or recurrences were noted for up to 3 months after treatment was completed.

M. gordonae is found widely throughout the environment. Infections caused by M. gordonae usually occur in the lungs (and only occasionally in other organs) of immunocompromised patients. A cutaneous infection with M. gordonae is unusual and a paranasal sinus infection even rarer.

Seven cases of cutaneous infection with M. gordonae have been reported; all were in women 38–80 years of age. The infection can affect persons who have not experienced trauma or been exposed to immunosuppressants. The most common lesions caused by M. gordonae are nodules that slowly enlarge and become ulcerated over several months. Lesions usually are located on the face, at distal extremities, or at sites of previous trauma (1,5–8). In this case, the infection caused lesions throughout the facial skin, nasal mucosa, and paranasal sinus, probably because the delay in accurate diagnosis allowed for wide dissemination of the pathogen.

Although it is generally believed that a positive T-SPOT.TB result means the patient has an M. tuberculosis infection, positive results have been reported for infections caused by nontuberculous mycobacteria (2,9). The T-SPOT.TB assay uses the M. tuberculosis antigens ESAT-6 and CFP-10. The ESAT-6 and CFP-10 genes are located within the M. tuberculosis region of difference 1 (RD1), a DNA sequence that is also present in M. marinum, M. kansasii, M. szulgai, and M. gordonae (10). Because these genes are present in other mycobacterial genomes, the T-SPOT.TB assay might be useful for diagnosing infections with multiple RD1-possessing mycobacteria. However, further studies are needed to confirm its diagnostic value.

Dr. Yanging Chen is a fellow of the Institute of Dermatology at the Chinese Academy of Medical Sciences and Peking Union Medical College. Her major research interests are nontuberculous mycobacterial infection and skin diseases.