Analysis of complete capsid sequences of the emerging norovirus GII.17 Kawasaki 308 from 13 countries demonstrated that they originated from a single haplotype since the initial emergence in China in late 2014. Global spread of a sublineage SL2 was identified. A new sublineage SL3 emerged in China in 2016.

Norovirus infections are a leading cause of acute gastroenteritis worldwide in persons of all age groups. Despite the broad genetic diversity, norovirus GII.4 has predominated during the past 20 years (1). During winter 2014–15, a new norovirus GII genotype 17 variant, known as Kawasaki 308–like 2014 (GII.17 Kawasaki), emerged and became the predominant genotype in Hong Kong, China (2), several major cities of mainland China (3,4), and Japan (5). This variant also was detected sporadically outside of Asia in countries such as Italy, Romania, and the United States (6–8). This new GII.17 Kawasaki variant is distinct from other GII.17 strains, including the co-circulating Kawasaki 323–like strains; it has 2 characteristic amino acid insertions in the most surface-exposed antigenic region of the major capsid viral protein 1 (VP1) (2). These changes have the potential to alter the antigenic properties or the virus–host cell binding preference, raising concern about the global spread of this variant and its replacement of GII.4 variants (9). To study the phylodynamic transmission pattern of norovirus GII.17 Kawasaki, we analyzed full-length VP1 nucleotide sequences collected worldwide during late 2014 through early 2016.

We chose the region VP1 to analyze because it contained the most hypervariable protruding domain 2 across the norovirus genome and represented most sequences deposited in the public domain. The entire dataset comprised 254 complete VP1 sequences from 13 countries, and all were obtained from samples collected during September 2014–March 2016 (Table). Among them, 129 sequences from 10 countries were determined for this study (Technical Appendix), and the remaining 125 sequences were retrieved from GenBank. These sequences were collected from diverse settings, including outbreaks in healthcare facilities and food-serving sites, sporadic community cases, and hospitalized patients (Technical Appendix Table 1). 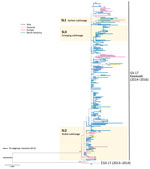 GII.17 Kawasaki viruses were found in 13 countries across 4 continents: Canada, China, Germany, Hungary, Italy, Japan, the Netherlands, New Zealand, Russia, Slovenia, South Korea, Thailand, and the United States. Australia and South Africa reported no GII.17 Kawasaki as of mid-2015 and early 2016, respectively. Maximum-likelihood phylogenetic inference showed different genetic clusters within GII.17 Kawasaki, indicating rapid genetic diversification of viral population during spread (Figure 1; Technical Appendix Figure). Sequences from the same continent scattered into different genetic clusters, inferring multiple introduction and frequent transmission events. To investigate the virus transmission pattern, we constructed a median-joining haplotype network based on complete VP1 nucleotide sequences (Technical Appendix). Overall, the 254 VP1 sequences comprised 207 different haplotypes (Figure 2). We identified a highly connected basal haplotype (Figure 2) that consisted of 8 identical VP1 sequences collected in the initial phase of the epidemic during November 2014–March 2015 from 6 cities mostly in Asia (2 from Hong Kong; 1 from Shanghai, China; 1 from Guangzhou, China; 1 from Taiwan; 2 from South Korea; and 1 from Russia). The same basal haplotype was concluded using integer neighbor-joining and tight span walker network models. The central node might represent a competent virus haplotype capable of replicating and spreading efficiently among humans and from which nearly all haplotypes originated. We found only 2 nucleotide differences without amino acid change between the basal haplotype and the first case-patient with GII.17 Kawasaki virus in this study (NS-405; collected in September 2014 from Hong Kong) (Figure 2, black arrow). We determined complete genomes that comprised the basal haplotype for this study for the 2 Hong Kong strains and downloaded data for the 2 South Korea strains. These viruses had 4 unique amino acid substitutions distinct from NS-405: 2 in the nonstructural polyprotein (A187D in N terminal protein and N739S in protease) and 2 in VP2 (K58R and A89S; outside of the VP1-interacting domain) (Technical Appendix Table 2). Substitution in the protease might mediate changes in the cleavage efficiency of the polyprotein in norovirus replication (10). Although we noted no substitutions in the RNA-dependent RNA polymerase, N terminal protein and VP2 were previously implicated in modulating polymerase activity, virus tropism, and persistence (11,12). The 4 non-VP1 residues may affect viral fitness of the emergent GII.17 Kawasaki in humans; however, functional characterization is required (13).

We identified 3 important sublineages by topology (Figure 2). Viruses belonging to sublineage SL1 (Figure 2, blue shading) clustered closest to the first GII.17 Kawasaki isolate in this study. SL1 included strains from 6 countries outside of China across 3 continents: Thailand (collected in October 2014), United States (November 2014), Italy and the Netherlands (February 2015), Slovenia (August 2015), and Canada (December 2015–January 2016). The global spread of GII.17 Kawasaki viruses within a few months after the initial emergence in China in late 2014 highlights rapid transmissibility of these viruses. Despite the molecular evidence of early global presence of SL1, the apparent limited circulation of this sublineage is intriguing. SL1 was the only sublineage not originating from the basal haplotype but directly from the earliest NS-405. Sequence analysis of the other 2 SL1 complete genomes available, collected from the United States (Hu/GII.17/Gaithersburg/2014/U.S.; GenBank accession no. KR083017) and Taiwan (Hu/GII.17/CGMH70/2015/TW; GenBank accession no. KR154231), found none of the 4 non-VP1 substitutions observed in the basal haplotype. In this dataset, viruses belonging to sublineage SL2 had the most cases and widest geographic breadth (Figure 2, pink shading). SL2 was detected in 6 countries outside of China across 3 continents (Germany, Japan, New Zealand, Russia, Slovenia, and Thailand) and most of the non-China sequences from 2014–15 (36%) and 2015–16 (41%) seasons belonged to this sublineage (Figure 2, inset). The most successful SL2 might have an advantage to global spread, although we cannot rule out sampling bias. During the 2015–16 season, SL2 continued to circulate over a wide geographic area, although none of the sequences from China belonged to this sublineage. Instead, sublineage SL3, first detected in January 2015 as a minority (7%) in China in the 2014–15 season, became the predominant (63%) circulating GII.17 Kawasaki virus in both southern (Hong Kong) and eastern (Shanghai) parts of China during 2015–16 among sequences analyzed (Figure 2, green shading and inset). No sequences from other countries clustered into SL3. This emerging sublineage highlights that GII.17 Kawasaki viruses were still circulating and, more important, rapidly evolving in various regions of China. Robustness of sublineage topology was confirmed in the phylogenetic tree (Figure 1).

We determined the complete VP1 sequences of 129 GII.17 Kawasaki strains from 10 countries. Our analyses suggest that the new GII.17 Kawasaki originated from a single haplotype from which rapid genetic diversification into multiple sublineages occurred during global spread after the initial emergence in China in late 2014. Norovirus diversification into sublineages provides a preepidemic virus pool from which new pandemic GII.4 variants emerged (14). Although our study is limited by its focus on VP1 sequence analysis and not on virus genomes, it nevertheless is a good demonstration that a global network of norovirus laboratories sharing virus sequence information can delineate virus transmission pattern upon spread.

Dr. Martin C.W. Chan is an assistant professor in the Department of Microbiology of the Chinese University of Hong Kong. His research interest focuses on molecular epidemiology and pathogenesis of human noroviruses.

We thank Yuanyuan Qiu and Eloisa Hasing for technical support.

This study was supported in part by the Commissioned Health and Medical Research Fund (Phase 3) of Food and Health Bureau of the Hong Kong Special Administrative Region Government (to M.C.W.C.; reference number CU-15-C2); institutional direct grant for research (to M.C.W.C.; reference number 2015.1.036); Thailand’s Research Chair Grant from the National Science and Technology Development Agency (to Y.P.); and European Union H2020 grant COMPARE under grant agreement number 643476. The New Zealand samples were collected for norovirus outbreak surveillance purposes, which is funded by the New Zealand Ministry of Health.