Since 2002, West Nile virus (WNV) has been detected every year in Houston and the surrounding Harris County, Texas. In 2014, the largest WNV outbreak to date occurred, comprising 139 cases and causing 2 deaths. Additionally, 1,286 WNV-positive mosquito pools were confirmed, the most reported in a single mosquito season. 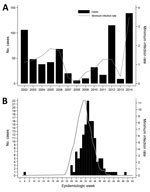 Figure 1. Epidemic curves depicting number of cases of West Nile among humans and minimum infection rate (MIR) of positive mosquito pools by year (A) and by epidemiologic week (B), Houston/Harris County, Texas,...

During 2002–2014, a total of 650 human WNV cases were reported to HCPH and HHD (Technical Appendix Table 1), including 35 deaths (case-fatality rate 5.4%). This total represented 14% of all cases reported from Texas during this period. The epidemic curve revealed an increased number of cases in 2002, 2006, 2012, and 2014 (Figure 1), which correlated with the minimum infection rate for mosquitoes (Pearson correlation coefficient r = 0.74).

During 2014, Harris County reported its highest number of WNV human cases to date: 139 cases and 2 deaths. This total represented 37% of all cases in Texas. Most (76%) cases were WNND (Table 1). Overall, incidence was 3.26 cases/100,000 population; 69% of case-patients were male. Mean case-patient age was 57 years (range 6–92 years); most (76%) case-patients were ≥45 years of age. Attack rates increased with age, from 0.4 cases/100,000 population for those <18 years of age to 14.5 cases/100,000 population for those ≥65 years of age. A higher attack rate was observed among non-Hispanic whites when compared with black, Hispanic white, and Asian populations. We did not detect statistically significant differences between WNND and WNF occurrence related to race/ethnicity, age, or sex (all p values >0.05). This finding is in contrast to the Texas 2012 statewide outbreak, during which being male, >65 years of age, and of a minority population were statistically associated with WNND (3). Although results from this study had similar trends, the lack of statistical significance was likely caused by the small sample size of WNF cases (n = 34).

The 2014 WNV outbreak in Houston/Harris County was unexpected, particularly because transmission activity across the state was at low levels, and only 379 cases were reported statewide. It is likely that the actual number of WNV cases was considerably higher, particularly considering that 76% of reported case-patients had severe WNND, which indicates a probable diagnostic bias. Prior studies showed that <1% of WNV infections manifest as WNND (8,9). A recent study in Houston showed that WNV testing was ordered for only 37% of viral meningitis/encephalitis case-patients (10), further highlighting concerns for underestimation of the true extent of disease.

We recently reported that WNV activity appears to have a 3-year pattern that showed increases in reported cases observed in 2003, 2006, 2009, and 2012 (2,3). During the years in which we observed increased numbers of cases, we also observed earlier detection of positive mosquito pools, which first appeared in May, compared to June in non-outbreak years. Vector abundance and increased amplitude of transmission are likely driven by ecologic and environmental factors. In 2014, we were unsure why such a large outbreak occurred in this region compared with prior years. Weather patterns during 2012–2014 were different: 2012, after the drought of 2011, had mild winter temperatures. Conversely, 2014 had below-average winter temperatures, above-average rainfall, and no drought conditions. Further research would aid our understanding of factors that drive WNV transmission.

Vector surveillance is vital to disease prevention. The year-round Integrated Mosquito Management Program includes surveillance-guided vector control. It is difficult to estimate the number of WNV cases prevented; however, considering the high minimum infection rate in 2014 in the densely populated city of Houston, we believe that 139 cases are a much lower number than what could have otherwise occurred if no surveillance/control activities had been implemented. Barber et al. found that vector control is cost-effective if at least 15 cases of WNND are prevented (11).

Continuous WNV disease activity has had a high economic effect on the Houston/Harris County area. By using estimates provided by Barber et al. (11) (adjusted to 2014 US dollar value [12]), we calculated the acute medical care and productivity costs of the 2014 outbreak to be ≈$6 million (Technical Appendix Table 3). In addition to high medical costs, costs related to rehabilitation/long-term care, surveillance, and vector control would be considerable.

The 2014 outbreak of WNV in the Houston/Harris County area is a reminder of the continuous effect and the unpredictable nature of disease transmission. With no specific therapeutic options or vaccine available, the costs related to medical care, surveillance, and vector control will continue to mount. Public health authorities should remain vigilant to prevent mosquitoborne infections. We expect endemic levels of transmission and occasional epizootics in the years to come.

The authors thank all epidemiologists at both health departments and mosquito surveillance technicians at Harris County Public Health Mosquito and Vector Control Division for their assistance with data collection. We also thank Melina Evdemon and Chris Fredregill for their technical assistance during the creation of the figures.