We report the identification of a neurotropic astrovirus associated with encephalitis in a sheep. This virus is genetically almost identical to an astrovirus recently described in neurologically diseased cattle. The similarity indicates that astroviruses of the same genotype may cause encephalitis in different species.

Astroviruses are nonenveloped viruses with a single stranded, positive-sense RNA genome. They are best known to be associated with gastroenteritis, especially in humans. Recently, reports of these viruses in association with encephalitis have increased dramatically, with reports of cases in humans (1), mink (2), and cattle (3–6).

The most common causes for viral encephalitis in sheep include maedi-visna virus, Borna disease virus, and rabies virus. In a high proportion of cases of nonsuppurative encephalitis (which is indicative of a viral infection) in sheep, however, the etiologic agent remains unknown (7). To investigate that matter, we subjected 3 ovine encephalitis samples from our archives to next-generation sequencing and a bioinformatics pipeline for virus discovery (Technical Appendix). In 1 animal (ID 41669), 1 of the contigs obtained had high similarity (>98%) to bovine astrovirus CH15 (BoAstV-CH15), a virus found recently in 2 cases of nonsuppurative encephalitis in cattle (5). The affected sheep was a 7-year-old Swiss white alpine ewe that was culled for reasons other than human consumption. No other information about the clinical history of the animal was available. Histological diagnosis consisted of severe nonsuppurative meningoencephalitis. Routine diagnostic tests for Borna, rabies, and maedi-visna viruses were all negative.

We used primers based on the BoAstV-CH15 genome sequence (GenBank accession no. KT956903) and the Sanger method to sequence the complete genome of the ovine strain (Technical Appendix Figure 1), which we named ovine astrovirus CH16 (OvAstV-CH16). The sequence we obtained shared >98% identity with BoAstV-CH15 on the nucleotide and amino acid level (Genbank accession no. KY859988; Technical Appendix Table 1). The virus reported here is genetically clearly distinct from intestinal OvAstV strains described previously (OvAstV-1 and OvAstV-2; Technical Appendix Table 1).

A phylogenetic comparison confirmed the close relationship of OvAstV-CH16 with BoAstV-CH15 (5) and BoAstV-BH89/14, another astrovirus detected in association with encephalitis in a cow in Germany (6). Recently, 2 astroviruses were reported in association with encephalitis in sheep in Scotland (OvAstV UK/2013/ewe/lib01454 and UK/2014/lamb/lib01455) (8), and we included their genomic data in the study comparison. All these strains clustered in the same branch of the phylogenetic tree, with >95% amino acid sequence similarity in the viral capsid protein (Technical Appendix Figure 2) and, therefore, should be considered 1 genotype species (9). When we compared all these viruses more closely on the amino acid level, we were not able to find any sequence variant that could be specifically associated with a tropism for sheep or cattle (Technical Appendix Table 3).

We then analyzed brain samples of sheep with nonsuppurative encephalitis of unknown etiology (n = 47), which had been identified within the framework of active disease surveillance in Switzerland (7), by RT-PCR specific for BoAstV-CH15 (online Technical Appendix). None reacted positively, implying a low incidence of OvAstV-CH16 infection associated with encephalitis in the sheep population in Switzerland. 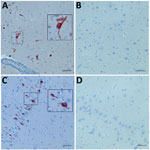 To confirm the presence of OvAstV-CH16 in situ, we used polyclonal antisera targeted at the putative capsid protein of BoAstV-CH15 and tested formalin-fixed, paraffin-embedded brain tissues of sheep 41669 by immunohistochemistry (Technical Appendix). We observed positive staining of neurons, assessed as such on the basis of morphological criteria, in all brain regions examined (e.g., medulla oblongata, cerebellum, thalamus, hippocampus, cortex, caudate nucleus), in particular in some areas (Figure; Technical Appendix Figure 3). This finding supports a plausible biological association of OvAstV-CH16 infection and encephalitis in the sheep under investigation and underlines again the close relationship between OvAstV-CH16 and BoAstV-CH15. The identification of similar astroviruses in sheep and cattle with comparable diseases, by different methods and in distinct geographic areas, further strengthens these findings. We consider it unlikely that the ovine cases reported in Scotland and Switzerland are epidemiologically related and speculate that the respective viruses were already geographically widely spread but were undetected until recently, which also seems to be the case for neurotropic astroviruses in cattle.

The importance of the link between astroviruses and encephalitis is increasingly being brought to light, but the factors determining their tropism and neuroinvasion are still unknown. Deeper epidemiologic, genetic, and molecular investigations will help to clarify these aspects of astrovirus pathology. Astroviruses were traditionally considered to be host specific, but in recent years, several reports challenged this assumption; for instance, when human astroviruses were found in fecal samples of primates (10). In such cases, however, effective infection of atypical hosts was never shown. In this study, we demonstrated the presence of the virus in situ, a finding that strengthens the likelihood of such an infectious event. The fact that a virus of the same genotype was described in cattle with similar pathologic findings also challenges this concept of host specificity and suggests that astroviruses can cross the species barrier and, therefore, represent a zoonotic threat as not only a gastroenteritic agent but also a potential cause of encephalitis.

Dr. Boujon is a veterinarian and PhD student at the Vetsuisse Faculty in Bern. Her primary research lies in the study of neurotropic astroviruses in cattle.

The authors thank Muriel Fragnière and Camille Monney for excellent technical support, Anna Oevermann for neuropathology expertise, and the Next Generation Sequencing Platform of the University of Bern, which is supervised by Cord Drögemüller, for performing the high-throughput sequencing experiments. Thanks also to L. Boujon for proofreading the article.

This work was funded in part by the Federal Food Safety and Veterinary Office (grant MON-108), by the Swiss National Science Foundation (grant 31003A_163438), and by the Bangerter-Rhyner-Foundation.