In 2013, the Centers for Disease Control and Prevention (Atlanta, GA, USA) declared that multidrug-resistant Neisseria gonorrhoeae infections were 1 of the top 3 urgent antimicrobial drug resistance threats (1). To combat this growing threat, we developed and implemented a real-time reverse transcription PCR at the University of California, Los Angeles (Los Angeles, CA, USA), to detect the codon 91 mutation in the gyrase A (gyrA) gene in N. gonorrhoeae remnant clinical specimens (2). Mutations in the gyrA gene of N. gonorrhoeae, specifically at codon 91, have been demonstrated to reliably predict resistance to ciprofloxacin (3).

Among 141 patients for whom N. gonorrhoeae genotyping was attempted, 110 (78%) had a genotype identified; 31 (22%) had an indeterminate genotype. Of the 110 patients who had a genotype identified, 48 (44%) had a mutant genotype and 62 (56%) had a wild-type genotype. Twenty (18%) of the patients were women, 1 of whom was a transgender woman. The remaining 90 (82%) patients were men, and 58 (64%) were men who have sex with men (MSM). Forty (42%) patients who had documentation of HIV status were infected. Sixteen women had pregnancy tests performed; 6 (37%) of these women were pregnant. We obtained demographic characteristics and other factors for all patients (Table).

Among 35 patients with a gyrA mutant genotype who had medical records going back >2 years, 9 (26%) were exposed to fluoroquinolones during that time, compared with 6 (15%) of 41 patients with wild-type gyrA genotype with medical records going back >2 years (PR 1.4, 95% CI 0.85–2.3; p = 0.23). A recent study demonstrated that treatment might be a major driver of resistance (7), and a previous study demonstrated that a history of fluoroquinolone exposure is associated with an increased prevalence of fluoroquinolone resistance (8). The lack of statistical significance between previous fluoroquinolone exposure and presence of N. gonorrhoeae mutant gyrA genotype in our study might be caused by small sample size. 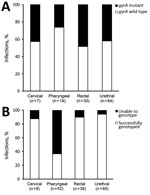 Of the 42 infections that could not be genotyped, 32 were in 31 patients who had no other genotyped infections. These infections were excluded from our analyses. The remaining 10 infections were in patients who had a genotyped infection at another anatomic site: 9 of these patients were MSM and 1 was a woman. There was no major difference in distribution of sexual orientation, age, or genotype for indeterminate samples with identified genotypes for another simultaneous infection compared with those that did not have successful genotyping of another simultaneous infection.

Previous studies have reported a similar low sensitivity of the N. gonorrhoeae gyrA gene assay for pharyngeal specimens, but the cause remains uncertain (6,9). It was previously believed that PCR inhibitors were present in pharyngeal reservoirs, perhaps from commensal Neisseria spp.; however, this suggestion is no longer believed to be the case (6,9).

Our study had some limitations. First, patients who had medical records that go back <2 years might have received fluoroquinolones or had N. gonorrhoeae infections diagnosed at other institutions. If we were able to access that information, we would probably see a stronger association between mutant gyrA genotype and fluoroquinolone exposure and history of N. gonorrhoeae infection. Second, the UCLA Health system is a large, well-established institution in a large metropolitan area. Therefore, our results might not be representative of trends in N. gonorrhoeae resistance in other regions or healthcare systems.

In summary, we found a prevalence of 44% for the mutant gyrA genotype, which confers ciprofloxacin resistance, among patients infected with N. gonorrhoeae. Molecular methods to predict susceptibility testing offer a potential new way to monitor N. gonorrhoeae drug resistance in the United States. Replication of our work in other settings is urgently needed.