The phenotypic similarities are substantial among members of the B. pseudomallei complex, other Burkholderia species, and other bacteria such as Pseudomonas spp. Laboratory personnel unfamiliar with B. pseudomallei often have difficulty identifying it using microbiologic methods commonly available in clinical settings. Automated biochemical systems might also misidentify B. pseudomallei because of an insufficient number of reference strains in their databases. Incorrect identification can delay appropriate antimicrobial therapy (1,4,7).

Although rare, B. thailandensis infections in humans have been reported. The first case reported in the literature occurred in or before 1999 in Thailand in a 16-year-old boy who suffered compound fractures in a motorcycle accident (8). The second case occurred in 1997 in a 76-year-old man in Louisiana, USA, who had a pleural wound; this case resulted in recovery of isolate H0587 (also known as CDC2721121). Further details on the wound and whether it was acquired locally or whether the patient had a travel history to areas endemic for B. thailandensis are not available. The third case occurred in 2003 in a previously healthy 2-year-old boy in Texas, USA, who aspirated water from a ditch after a car accident; this case resulted in recovery of isolate TXDOH (also known as CDC3015869) (9). The fourth case occurred in 2011 in a 42-year-old man in Malaysia who had a foot abscess with ankle swelling and skin cellulitis (10). The fifth report was a fatal case that occurred in 2013 in a 67-year-old man who was treated at a hospital in Chongquing, China (11); however, subsequent correspondence suggested that the species had been identified incorrectly and was most likely B. pseudomallei (12).

In April 2017, a 29-year-old woman with diabetes in Arkansas, USA, crashed into a large metal trash bin while driving an all-terrain vehicle, resulting in an open bone forearm fracture. Treatment of the wound included installation of a metal plate. Approximately 3 months later, the patient returned to the hospital because of a 2-week history of swelling of her forearm. An isolate was recovered from pure culture graded 1+ (trace growth) from a deep operative tissue specimen from the forearm wound. Initial antimicrobial treatment consisted of piperacillin/tazobactam, vancomycin, and cefazolin. Testing of the isolate using the Microscan Walkaway automated biochemical system (Beckman Coulter, Atlanta, GA, USA) by the hospital laboratory identified B. pseudomallei. Based on this result, the Arkansas Department of Health (DoH) contacted the Centers for Disease Control and Prevention (CDC) about a suspected case of melioidosis. After the hospital transferred the isolate to the Arkansas DoH, B. pseudomallei was ruled out by using biochemical and PCR testing. The isolate was presumptively identified as B. thailandensis by using the Bruker MALDI Biotyper mass spectrometer (Bruker Daltonics, Billerica, MA, USA). Arkansas DoH forwarded the isolate, designated BtAR2017, to CDC for confirmation and further characterization. The patient was discharged with 6 weeks of intravenous ceftazidime treatment. She last saw her healthcare provider in December 2017 and was reported completely healed.

Biochemical testing, including arabinose assimilation, identified isolate BtAR2017 as B. thailandensis. We extracted DNA from the isolate for next-generation sequencing (Technical Appendix). We analyzed the genome of BtAR2017 for multilocus sequence typing (MLST), which yielded sequence type (ST) 101. ST101 was previously identified in B. thailandensis isolates TXDOH and H0587 (9). Although MLST is commonly used to subtype members of the B. pseudomallei complex, it has only a moderate level of resolution and, because of recombination, might not reflect actual levels of relatedness (5,13). 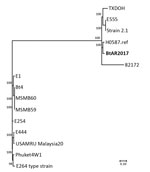 For high-resolution analysis, we compared the genome of BtAR2017 with a reference panel of publicly available B. thailandensis genomes (Table). A dendrogram based on the SNP analysis indicates that BtAR2017 clusters with H0587 and TXDOH (Figure). Also within the BtAR2017 cluster is E555, an environmental isolate recovered in Cambodia in 2005, and strain 2.1, which metadata in the National Center for Biotechnology Information entry indicate was recovered in June 2017 from soil in Vietnam (14). This cluster appears as an outlier subgroup compared with other examples of B. thailandensis, including E264T (type strain). MLST indicates that E555 is ST696, which is a single-locus variant of ST101. Comparison of the genome sequences indicates >4,700 core SNPs between BtAR2017 and E555, compared with >32,700 SNPs between BtAR2017 and E264T. BtAR2017 has >2,200 SNPs compared with H0587 but >5,900 SNPs compared with TXDOH.

Sim et al. (14) previously noted this outlier subgroup and postulated that its members, including E555, might be more virulent than typical examples of B. thailandensis. However, their studies challenging BALB/c mice and the nematode Caenorhabditis elegans with E555 did not reveal any significant difference in virulence compared with E264T (14). Another study by Deshazer using TXDOH and H0587 to challenge mice and hamsters indicated that in these models TXDOH also had a similar level of virulence as E264T, whereas H0587 was avirulent (15). E555 is known to have features such as a B. pseudomallei–like capsular polysaccharide (14). We tested BtAR2017 for B. pseudomallei capsular polysaccharide, but results were negative.

We analyzed average nucleotide identity (ANI) and determined that the genome for BtAR2017 has 98.99% identity with that of E264T, which is above the 95% threshold commonly used for distinguishing species. The BtAR2017 genome also had an ANI of 99.75% compared with TXDOH but only 92.7% compared with K96243, a representative B. pseudomallei strain used in lieu of the species type strain. Although BtAR2017 is in the outlier subgroup resolved by genomic SNP analysis, these ANI results suggest that BtAR2017 and other members of the subgroup are B. thailandensis and not a novel species.

The recovery of the clinical isolates suggests that B. thailandensis might be endemic to the continental United States and capable of causing opportunistic infections associated with traumatic injuries. Because of the limited number of reports, this bacterium’s geographic range in North America is unknown. Two of the 3 clinical isolates recovered in the United States are now well documented and were acquired in the southern states of Texas and Arkansas, possibly reflecting the affinity for warm climates associated with most members of the B. pseudomallei complex (the exception being B. mallei, which is host-adapted to equids and does not persist in the environment). These 3 clinical isolates also are members of the outlier subgroup on the dendrogram (Figure), which suggests a genetic bottleneck or discrete seeding event for the United States, assuming the Louisiana case was acquired locally. Further study of B. thailandensis will improve our knowledge of its geographic range and ability to cause infections.

Dr. Gee is a research biologist in the Bacterial Special Pathogens Branch, Division of High-Consequence Pathogens and Pathology, National Center for Emerging and Zoonotic Infectious Diseases, Centers for Disease Control and Prevention. His primary research interest is molecular epidemiology of members of the B. pseudomallei complex and other emerging bacterial pathogens.

Our analysis made use of the Burkholderia pseudomallei MLST website (http://pubmlst.org/bpseudomallei) sited at the University of Oxford. The development of this site has been funded by the Wellcome Trust.