During cefoxitin-based nasal screening, phenotypically categorized methicillin-resistant Staphylococcus aureus (MRSA) was isolated and tested negative for the presence of the mecA and mecC genes as well as for the SCCmec-orfX junction region. The isolate was found to carry a mecB gene previously described for Macrococcus caseolyticus but not for staphylococcal species. The gene is flanked by β-lactam regulatory genes similar to mecR, mecI, and blaZ and is part of an 84.6-kb multidrug-resistance plasmid that harbors genes encoding additional resistances to aminoglycosides (aacA-aphD, aphA, and aadK) as well as macrolides (ermB) and tetracyclines (tetS). This further plasmidborne β-lactam resistance mechanism harbors the putative risk of acceleration or reacceleration of MRSA spread, resulting in broad ineffectiveness of β-lactams as a main therapeutic application against staphylococcal infections.

Staphylococcal cassette chromosome mec (SCCmec)–mediated β-lactam resistance resulting from production of an additional penicillin-binding protein (PBP) 2a drastically limits the treatment options in cases of hospital- and community-related infections by staphylococci, leading to increased illness, death, and socioeconomic costs (1,2). Besides methicillin-resistant coagulase-negative staphylococci, notorious for foreign body–associated infections, methicillin-resistant Staphylococcus aureus (MRSA) strains are a global public health priority, despite some countries in Europe reporting stabilizing or decreasing MRSA rates (3–5). Since the initial reports of MRSA in 1961, several epidemic waves have resulted in threats of healthcare-, community-, and livestock-associated MRSA (6–9).

For staphylococci, 2 PBP 2a-encoding genes, mecA and mecC, including several allotypes, have been described as chromosomally located genetic bases for phenotypic methicillin resistance (10–14). In contrast, mecB, originally described as mecAm, was reported as part of a probable primordial form of a methicillin resistance gene complex often found in a transposon mec complex (Tn6045) in Macrococcus caseolyticus, a colonizer of animal skin (15,16). Just recently, a mecD gene, most closely related to mecB, has been detected in bovine and canine M. caseolyticus isolates (17).

The impact of plasmidborne resistance for staphylococci is abundantly demonstrated for β-lactamase–mediated penicillin resistance. Resistance rates are >60% in human S. aureus isolates from the general population and >90% from hospital-related cases, regardless of the clinical background (18,19). In contrast to frequent interstrain and interspecies transmission of resistance plasmids by conjugation or transduction, only a relatively low rate of spontaneous horizontal transfer of SCCmec elements is assumed, resulting in still-manageable and controllable MRSA rates if prevention measures are adequate (20–24). However, transferable methicillin resistance might bear the consequence of an almost complete loss of β-lactam drugs as the most efficient class of antibacterial drugs for treatment of staphylococcal infections. Here, we report both a plasmid-encoded, and thereby transferable, methicillin resistance encoded by mecB and the occurrence of this gene in an isolate of the genus Staphylococcus.

We determined the MIC of cefoxitin for S. aureus isolate UKM4229 by the reference broth microdilution method according to the International Organization for Standardization (ISO) 20776-1 guideline (https://www.iso.org/standard/41630.html), as required by the European Committee on Antimicrobial Susceptibility Testing (EUCAST) and the Clinical and Laboratory Standards Institute (CLSI). Cefoxitin (Sigma Aldrich, Taufkirchen, Germany) was tested in 2-fold concentrations (0.25–128 µg/mL). We subcultured the isolate and incubated it overnight before testing.

We investigated the susceptibility profile of UKM4229 by determining MICs of various β-lactam and non–β-lactam antibiotic drugs (Table 2) using the gradient diffusion method (Etest; bioMérieux) according to the manufacturer’s instructions. As recommended, the inoculated plates were incubated at 35°C for 18 ± 2 hours. In addition, we tested oxacillin using conditions for increased expression of methicillin resistance, as reported for mecA isolates (30): Mueller-Hinton agar supplemented with 2% saline, incubation at 30°C, and prolonged incubation up to 48 h. We investigated the applicability of a commercial automated susceptibility testing device to recognize methicillin resistance due to presence of mecB in S. aureus by using the VITEK 2 system. We evaluated the in vitro activity of the endolysin HY-133 against UKM4229 using the broth microdilution method in accordance with ISO 20776-1 guidance (https://www.iso.org/standard/41630.html), as described elsewhere (31,32). In brief, we tested 2-fold final concentrations of HY-133 ranging from 0.06 µg/mL to 8 µg/mL using 1–5 × 105 CFU/mL suspension of UKM4229 in cation-adjusted Mueller-Hinton broth. The MICs were read after incubation at 35°C for 18 ± 2 h.

During routine MRSA screening, we recovered an S. aureus isolate UKM4229 from a combined nasal-throat swab of a 67-year-old male cardiology inpatient who had no signs of infection. We isolated colonies with typical appearance for presumptive MRSA from a chromogenic MRSA selective agar and identified them as S. aureus by VITEK 2, matrix-assisted laser desorption/ionization time-of-flight mass spectrometry, and PCR. Discrepancies between phenotypic detection of methicillin resistance by VITEK 2 and negative results of a PBP2a detection kit, as well as negative mecA and mecC test results, by commercial and in-house PCRs led to the detection of a mecB-encoded methicillin resistance. 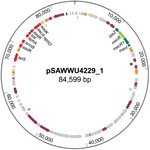 Figure. Circular map of the mecB-carrying plasmid pSAWWU4229_1 from Staphylococcus aureus isolate UKM4229, obtained from a 67-year-old cardiology inpatient who had no signs of infection, Münster, Germany. Arrows indicate annotated genes: the...

DNA microarray analysis and WGS revealed the isolate possessed the leucotoxin genes lukF, lukS, lukD, lukE, lukX, and lukY. The isolate belonged to capsule type 8, and the biofilm-associated genes icaA, C, and D were detected. Furthermore, the hlb-converting bacteriophage of immune-evasion cluster type G comprising the enterotoxin encoding genes sep, sak, and scn was present in the genome. Additional information about the virulence profile of this isolate is given in Technical Appendix Table 2.

Recent studies have shown that mobile SCCmec elements have been imported more frequently by different S. aureus clonal lineages than previously assessed (35). Nevertheless, in contrast to the huge diversity of non-MRSA S. aureus clonal lineages (36), comparatively few clonal lineages still dominate the global MRSA population (37). However, an increased transferability of methicillin resistance by a plasmid-encoded course of action would have the capacity to drastically change the MRSA epidemiology. In staphylococci and other members of the phylum Firmicutes, plasmids have contributed enormously to the emergence and spread of antimicrobial resistance, and plasmid-encoded penicillin resistance has reached or exceeded 80% of clinical staphylococcal isolates (38).

In M. caseolyticus, mecB genes have been found within the chromosome as part of an SCCmec element as well as on a plasmid (15,16,37). For S. aureus UKM4229, it was shown that the mecB carrying plasmid pSAWWU4229_1 was distantly related to a macrococcal plasmid (pMCLL2 of M. caseolyticus JCSC5402), substantiating a possible gene transfer between the two genera. Because macrococcal and staphylococcal species may share the same hosts, mammalian skin and food, an exchange of mobile genetic elements between members of both closely related genera is likely and transmission to mammal-adapted staphylococci is generally to be feared (3). Genotyping of S. aureus UKM4229 revealed spa-type t091, which is relatively common, as 0.92% of the >370,000 submitted spa sequences assigned to ≈17,000 spa types (as of February 2017) of the RIDOM SpaServer database (http://spa.ridom.de/spatypes.shtml) belong to this spa type.

Routine phenotypic methods for susceptibility testing cannot distinguish between methicillin resistance determinants; thus, mecB-encoded methicillin resistance can remain undiscovered. Moreover, mecB detection is not part of molecular screening approaches. Certain clonal lineages of S. aureus, including MRSA, have emerged as zoonotic pathogens colonizing farm and wild animals (40). Tetracycline resistance frequently observed in staphylococci associated with husbandry is another indication for a possible livestock origin of the isolate (41). A putative livestock source of the mecB-encoding plasmid underlines the importance of the One Health concept in combating the spread of antimicrobial drug resistance.

Although the mecB isolate has been tested susceptible toward several agents of non–β- lactam antibiotic drug classes, the generally increased risk, compared to that of a SCCmec transfer, should be taken into consideration in that a mecB-encoding plasmid will be transmitted through horizontal gene transfer to other staphylococcal strains, even to already multidrug-resistant strains. In S. aureus, 2 major means of horizontal gene transfer for plasmids have been described: conjugation and bacteriophage transduction. Here, pSAWWU4229_1 did not harbor the typical genes responsible for conjugation or mobilization, which is, however, a common lack in S. aureus, affecting ≈95% of plasmids (412 In contrast, for most staphylococcal plasmids, a transfer through bacteriophage generalized transduction has been suggested (43,44). Further studies are warranted to underpin this putative threat and to investigate how a plasmidborne methicillin resistance would affect the SCCmec-based methicillin resistance. For UKM4229, the WGS data revealed that the SCCmec chromosomal attachment site (attB) locus and the neighboring orfX (rlmH) gene were intact, and no integration of an SCCmec element was found.

The mecB isolate was tested to be susceptible to ceftobiprole and ceftaroline. Although cephalosporins with anti-MRSA activity are still active against the majority of MRSA isolates, nonsusceptibility has been already associated with certain MRSA lineages ranging between 3.9% and 33.5% of all MRSA isolates (45–48).

The discovery of plasmid-encoded methicillin resistance in S. aureus of probably macrococcal origin in a healthcare setting reveals a novel level of risk of the transfer of broad β-lactam resistance in staphylococci. Further studies are needed to clarify the real prevalence of mecB-caused methicillin resistance among MRSA and methicillin-resistant coagulase-negative staphylococci in human and animal populations, whether mecA and mecC genes could be found integrated on plasmids, and how the answers to these questions may affect human and animal health.

Dr. Becker is a professor of medical microbiology at the Institute of Medical Microbiology, University Hospital Münster, Münster, Germany. His research is focused on the epidemiology, pathogenesis, diagnosis, prevention, and therapy of staphylococcal infections. In particular, he has done extensive research on the characterization of MRSA and the staphylococcal small colony-variant phenotype.

We thank the Technology Development group, in particular Robert Sebra from the Icahn Institute for Genomics and Multiscale Biology at the Icahn School of Medicine at Mount Sinai, for PacBio sequencing and assembly, as well as Christian Ruckert from the Institute of Genomics at the University Hospital of Münster for bioinformatics support. We thank the GenDB support team for technical assistance and access to resources financially supported by the German Federal Ministry of Education and Research (BMBF) (FKZ 031A533) within the de.NBI network. Furthermore, we thank Jörg Wüllenweber for supervising the routine diagnostics leading to the isolation and presumptive identification of the isolate, as well as Melanie Bach and Martina Schulte for excellent technical assistance.