We investigated the transmission of the fishborne trematodes Centrocestus formosanus and Haplorchis pumilio by Melanoides tuberculata snails in Peru. We report on results of experimental, morphological, and molecular approaches and discuss the potential risk for future human cases, given the existence of food habits in the country involving the ingestion of raw fish.

The World Health Organization has estimated that the number of humans infected with fishborne trematodes exceeds 18 million, and >500 million persons are at risk of infection (1). Among the causative agents of these trematodiases are representatives of the family Heterophyidae, which are small intestinal parasites from birds and mammals, including humans (1–3). Infection by heterophyids can be considered an emerging disease because of a set of factors, including high prevalence, reported mainly in Asia; outbreaks caused by Ascocotyle longa trematodes in Brazil; the introduction of Centrocestus formosanus trematodes and Haplorchis pumilio flukes from Asia into the Americas; and the involvement of larvae of Procerovum varium flukes as causative agents of human ocular disease (3–5).

Of the 30 species of heterophyids recognized worldwide (4), 7, including C. formosanus and H. pumilio, are transmitted by the red-rimmed melania or Malaysian trumpet snail, Melanoides tuberculata (6). Even though human infection by these 2 heterophyids has not been reported in the Americas, the possibility of future cases must be considered, especially in countries like Peru, whose inhabitants consume ceviche, a culinary dish prepared with raw fish. Thus, the evaluation of the involvement of M. tuberculata snails in the transmission of heterophyids in this country is needed given the potential public health concern related to these parasites. 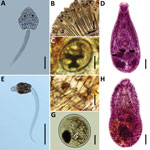 In this study, we collected snails in 2 areas of the central coast of Peru, the Ventanilla Wetlands Regional Conservation Area (VWRCA) (11°52′31″S; 77°8′37″W) and the Pantanos de Villa Wildlife Refuge (PVWR) (12°12′33″S; 76°59′28″W), during December 2015 and January, June, and July 2016. Identification of the collected M. tuberculata snail specimens was based on conchiliological features according to previously published reports (7,8). We placed the specimens individually onto polystyrene plates containing dechlorinated water, subjected them to photostimulation, and examined them under a stereomicroscope. We examined cercariae, fluke larvae, in a light microscope after vital staining (0.05% Nile blue sulfate) and preliminarily identified 2 cercarial types, pleurolophocercous (Figure, panel A) and parapleurolophocercous (Figure, panel E). We used samples of the cercariae for experimental infection of vertebrate hosts to obtain other developmental stages for identification. Experiments were conducted in accordance with the local animal experimentation ethics committee (Comissão de Ética no Uso de Animais, Universidade Federal de Minas Gerais, protocol 20/2016).

We exposed 2 groups of Poecilia reticulata guppies (n = 30) individually to 50–100 cercariae of each larval type. We euthanized fish surviving at 30 days postinfection and collected metacercariae found in the gills (Figure, panels B, C) of fish infected with pleurolophocercous cercariae and in the bases of the fins (Figure, panels F and G) of fish exposed to parapleurolophocercous cercariae. We administered metacercariae orally to dexamethasone-immunosuppressed mice. Adult parasites recovered in the small intestines of mice at 6–7 days postinfection were fixed, stained, and mounted on permanent slides. We studied the morphology of the experimentally obtained stages using a light microscope for identification according to taxonomic works (2,9).

From the experimental infection of mice, we obtained adult parasites identified as C. formosanus (Figure, panel D) and H. pumilio (Figure, panel H). Molecular data revealed that the samples of C. formosanus and H. pumilio cercariae found in M. tuberculata snails from Peru are conspecific with isolates of these species from Vietnam and Thailand (99.8%–100% similarity), a finding supported by phylogenetic analyses (Technical Appendix). In total, we collected 6,731 M. tuberculata snails, of which 112 (1.66%) were found to be infected with heterophyid cercariae. We found C. formosanus cercariae in 71 (1.8%) of 3,874 snails collected in VWRCA and in 29 (1.0%) of 2,857 snails collected in PVWR. We found H. pumilio cercariae in 12 of 2,857 (0.4%) snails from PVWR.

The presence of C. formosanus and H. pumilio trematodes in M. tuberculata snails from Peru reveals the need to focus attention on the possible effect of these fishborne agents on human health. The increasing number of reports of these trematodes in the Americas indicates that the geographical areas they have invaded are expanding. This finding should serve as a warning, particularly given the popularity of dishes based on raw fish.

Mr. Pulido-Murillo is a PhD student from Peru working in the Universidade Federal de Minas Gerais, Brazil. His research interests focus on morphological and molecular study of zoonotic helminths.

We thank Fernando Gil and Aldo López for the authorization for the development of the research in PVWR and VWRCA, respectively. Thanks are due to the biologist Christian Carazas and the engineer José Junco for help in some sampling of snails; to Rosa Martínez for the use of the laboratory at Universidad Nacional Mayor de San Marcos, Peru; and to Airton Lobo for technical support. We are grateful to Sara Vanessa Brant for constructive suggestions in the earlier version of this work.