During January 2013–April 2014, we subjected nasopharyngeal specimens collected from patients with acute febrile respiratory illness in a military hospital to PCR testing to detect 12 respiratory viruses and sequence a partial hexon gene for human adenovirus (HAdV) molecular typing. We analyzed the epidemiologic characteristics of HAdV infections and compared clinical characteristics of HAdV types. Among the 305 patients with acute febrile respiratory illness, we detected respiratory viruses in 139 (45.6%) patients; HAdV was the most prevalent virus (69 cases). Of the 40 adenoviruses identified based on type, HAdV-55 (29 cases) was the most prevalent, followed by HAdV-4 (9 cases). HAdV-55 was common in patients with pneumonia (odds ratio 2.17; 95% CI 0.48–9.86) and hospitalized patients (odds ratio 5.21; 95% CI 1.06–25.50). In soldiers with HAdV infection in Korea, HAdV-55 was the most prevalent type and might be associated with severe clinical outcomes.

Human adenoviruses (HAdVs) are considered the most important causative agent of acute respiratory infection in soldiers, particularly in new recruits (1,2). A total of 79 HAdV types have been documented (3). The distribution of HAdV types differs substantially by geographic region and environmental factors (4,5). HAdVs are prevalent in training facilities or military barracks for soldiers, but the prevalent types of HAdV have changed over time (6). Historically, HAdV-4 and HAdV-7 have been the most prevalent causes of acute febrile respiratory illness (AFRI) among US military personnel since the 1950s (7). Vaccination against HAdV-4 and HAdV-7 has been effective in reducing AFRI among US military trainees to date (8,9). However, since 2007, the emergence of new adenovirus types such as HAdV-14, which is distinct from the prototype in the United States, has been associated with outbreaks of AFRI and severe pneumonia (including several deaths) in military populations (10,11).

Characteristics of the Study Population and Case Definition

The study was approved by the Institutional Review Board of the South Korea Armed Forces Medical Command. During January 2013–April 2014, we enrolled in the study all new recruits and active duty soldiers with AFRI who were required to visit the emergency department or to undergo hospitalization at the Armed Forces Capital Hospital in Seongnam, South Korea. We defined AFRI as a history of fever or measured fever >37.6°C and the presence of >1 respiratory symptom such as cough, sore throat, or rhinorrhea with onset within the last 7 days. The Armed Forces Capital Hospital is the only tertiary care hospital in the South Korea military healthcare system. Furthermore, the hospital offers primary and secondary medical services to soldiers in the city of Seoul and Gyeonggi Province. Almost all soldiers in South Korea, except officers, use military hospitals for free health services.

We collected nasopharyngeal or throat swab specimens from the patients with AFRI within 24 hours after their hospital visit by using a flocked swab. We stored the specimen at 4°C in viral transport media until further testing. Within 3 days of collection, we sent specimens to a commercial laboratory center (GC Labs, Yongin, South Korea), where they were subjected to respiratory virus multiplex reverse transcription PCR.

We extracted DNA from the adenovirus-positive respiratory specimens by using the QIAamp DNA Blood Mini Kit (QIAGEN, Hilden, Germany). We amplified the partial nucleotides of the hexon gene by using PCR as described elsewhere with some modifications (19). We amplified viral sequences by using oligonucleotide primers producing a 475-bp fragment: ADHEX1F (5′-CAACACCTAYGASTACATGAA-3′) and ADHEX1R (5′-KATGGGGTARAGCATGTT-3′). PCR conditions were as follows: initial denaturation at 94°C for 1 min, followed by 35 cycles of denaturation at 94°C for 1 min, annealing at 50°C for 1 min, elongation at 68°C for 1 min, and final extension at 68°C for 5 min. For samples that tested negative in the first PCR reaction, we performed heminested PCR by using primers (273 bp) ADHEX1F (5′-CAACACCTAYGASTACATGAA-3′) and ADHEX2R (5′-ACATCCTTBCKGAAGTTCCA-3′) with the same temperature and time profiles. We determined DNA sequences in both directions by using the Applied Biosystems Automatic Sequencer ABI 3730xl and ABI Prism BigDye Terminator v3.1 sequencing system (Applied Biosystems, Foster City, CA, USA). We identified the type of HAdV by using BLAST (http://blast.ncbi.nlm.nih.gov/Blast.cgi).

We generated phylogeny on the basis of the 232-bp nucleotide sequences of the hexon gene of HAdVs. For the phylogenetic analysis, we selected the sequences of each type of HAdV from GenBank. We used MEGA 6 software to generate the phylogenetic tree and evaluated topologies by performing a bootstrap analysis of 1,000 iterations (20).

We obtained clinical information of the patients with HAdV respiratory infection during the study period from standardized case report forms. The case report forms, which included clinical diagnosis, intensive care unit stay, requirement for mechanical ventilation or vasopressor, and symptoms at presentation, were completed within 7 days of the hospital visit by an attending physician.

We conducted Pearson’s χ2 and Fisher exact test for the demographic and clinical variables by using the SPSS for Windows version 20 (IBM Corp., Armonk, NY, USA). For all analyses, we defined statistical significance as p<0.05.

Epidemiology of HAdVs in Soldiers with AFRI 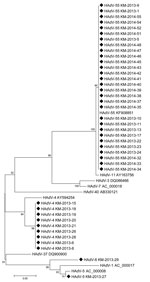 We observed no statistically significant difference in the demographic characteristics or signs and symptoms of the patients with HAdV-55 infection compared with those with other types of HAdV infection (Table 3). Furthermore, we observed no statistically significant difference between the patients in terms of laboratory and radiographic findings. Co-infections with other bacteria or viruses were similar in both groups. The patients with HAdV-55 infection were more likely to have onset pneumonia (44.8% vs. 27.3% [odds ratio (OR) 2.17; 95% CI 0.48–9.86]) and be hospitalized (86.2% vs. 54.5% [OR 5.21; 95% CI 1.06–25.50]) than those infected with other types of HAdV. In particular, we identified HAdV-55 infection in all patients who required hospitalization in the intensive care unit or mechanical ventilation caused by acute respiratory distress syndrome (ARDS).

In this study, the proportion of new recruits with HAdV infection among soldiers in South Korea was not as high as expected. More than half of the South Korean soldiers with HAdV infection were on active duty. These findings contrast with previous data in which HAdV-associated respiratory infection has been common among new recruits (7). The patients included in this study might have had clinically severe illness rather than mild illness because our institute is the only central referral hospital in the military system in South Korea. Moreover, HAdV easily spreads to advanced training sites or military barracks and it can spread in geographically dispersed military barracks by the movement of soldiers because of prolonged viral shedding (31). In this study, some of the patients with HAdV-55 infection who were active duty soldiers were identified in the clusters of patients in 4 military barracks (data not shown). Although the outbreak of HAdV-55 infection was not directly confirmed in this study, outbreaks of HAdV-55–associated respiratory infection might be occurring among active duty soldiers.

Our study has some limitations. First, the study was performed for a relatively short period (16 months). Although the data might be insufficient to reflect the epidemiology of respiratory HAdV infection among military personnel in South Korea, the variation of HAdV type over time and the impact of the emergence of HAdV-55 on clinical severity can be observed. Considering the long-term experience of the US military with respiratory HAdV infection, the distribution of HAdV types might show a substantial difference in the military and community populations in South Korea. Thus, a surveillance system must be established to detect the circulation of the HAdV type among military personnel. Second, the study population included patients who needed hospitalization or an emergency department visit. Among soldiers in South Korea with HAdV infection, patients who had severe clinical signs and symptoms might be those who were primarily enrolled in this study. Nevertheless, our results suggest that of the several HAdV types, HAdV-55 and HAdV-4 might be implicated in HAdV respiratory infections among soldiers in South Korea. Furthermore, active duty soldiers and new recruits could have a substantial disease burden caused by respiratory HAdV infection. Third, we could not determine HAdV types in 11 cases. The viral titer in the clinical specimen might have been low and the viral DNA degraded because some respiratory specimens were not frozen until the molecular experiment. Using the 2-step hemi-nested PCR, we did not observe a DNA band in 11 samples.

This study is important because it is a prospective study on patients with AFRI. Studies on the HAdV type in soldiers in South Korea since 2012 are limited. However, the previous studies provided data on the epidemiology of the HAdV type in patients with severe clinical manifestations or in those with HAdV respiratory infection. These conditions might result in bias in the epidemiology of HAdV infections among military personnel in South Korea.

In conclusion, our study found that HAdV was the most prevalent virus among soldiers with AFRI in South Korea. In particular, HAdV-55 and HAdV-4 were the prevalent types in soldiers with HAdV-associated respiratory infection. HAdV-55 was associated with severe clinical outcomes. Further studies are needed to verify which HAdV types are associated with AFRI in military recruits. In addition, studies on the introduction or development of an effective vaccine against HAdV-55 and HAdV-4 should be considered.

Dr. Heo is a physician in the Department of Infectious Diseases at Ajou Unversity School of Medicine. His current research interests are the epidemiology of vaccine-preventable and vectorborne diseases.

Dr. Noh is a physician in the Division of Infectious Diseases at Korea University Guro Hospital. Her current research interests are respiratory viruses and emerging infectious diseases.

This work was supported by a grant from the Armed Forces Medical Command, South Korea.

1Preliminary results from this study were presented at the European Congress of Clinical Microbiology and Infectious Diseases 2015, convened April 25–28, 2015, in Copenhagen, Denmark.