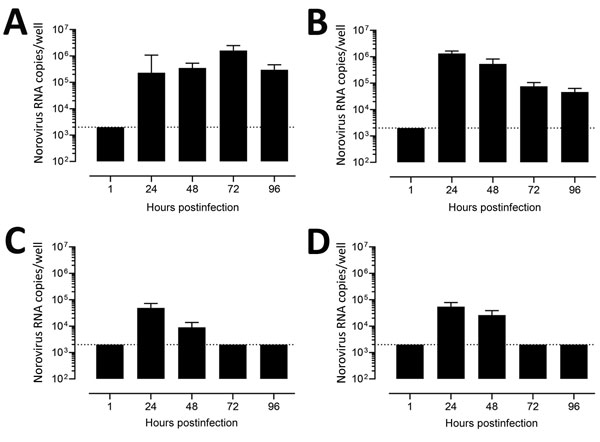 Figure 5. Confirmatory testing for human norovirus replication in human intestinal enteroids (HIEs). We inoculated jejunal HIE monolayers (J3 line) with A) GII.4 Pe-GII.4 Sydney (3.3 × 105 RNA copies/well), B) GII.P12-GII.3 (5.3 × 105 RNA copies/well), C) GII.P16-GII.2 (3.2 × 105 RNA copies/well), or D) GII.Pg-GII.1 (9.3 × 105 RNA copies/well). After 1 h at 37°C in 5% CO2, monolayers were washed, and media was replaced with differentiation medium and incubated at 37°C and 5% CO2. At 24, 48, and 72 hours postinfection, we removed the medium and added fresh differentiation media. At 96 hours postinfection, we removed the medium. We extracted RNA and quantified it by quantitative reverse transcription PCR from the supernatant at each time point. Data represent mean ± SD of 2 experiments with 3 wells for each time point. Dotted lines represent RT-qPCR limit of detection.