Although Zika virus has circulated in Asia longer than in the Americas, only 3 confirmed cases of congenital Zika virus infection with microcephaly have been reported in Asia (2 Thailand, 1 Vietnam) (1). As of June 2018, the genomic sequences of the viruses from these 3 cases have not been reported; thus, whether these cases were caused by an Asian lineage or an imported American lineage is unknown.

Several mechanisms involving virus genome sequences have been proposed to explain how Zika virus might cause microcephaly (2). Liang et al. (3) showed in vitro that replication of both the African (strains MR766 and IbH30656) and American (strain H/PF/2013) lineage viruses suppress Akt phosphorylation; this suppression is caused by an accumulation of mutations in the Zika virus genome that increase the number of phosphorylation sites on virus proteins that compete with host proteins for phosphorylation. Yuan et al. proposed that a serine to asparagine substitution (S17N) in the premembrane protein (stably conserved in the American lineage but not in the Asian) contributes to the onset of microcephaly (4). An increased frequency of retinoic acid response elements in the American lineage genome versus the Asian lineage genome has also been observed (2). We question these explanations because we report a confirmed case of congenital Zika virus infection with microcephaly in Thailand caused by an Asian lineage virus. 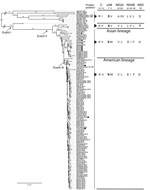 We retrieved 121 nonredundant Zika virus genomes (444 viruses, 99.9% nucleic acid identity cutoff) from GenBank to compare these isolates by phylogenetic analysis. All 7 BKK Zika virus isolates grouped within the Asian lineage (Figure). Virus from the amniotic fluid (BKK03), fetal brain (BKK02), and placenta (BKK04) of PW2 closely resembled each other (5 mismatches in BKK04 and 6 in BKK03, overall 99.898% identity). These 3 isolates were separated on the tree from their closest neighbor, a 2016 isolate from Singapore, by 40 mismatches. The number of retinoic acid response elements and predicted phosphorylation sites in BKK01–BKK07 was the same as the number in other Asian lineage Zika viruses (2). Also, the S17N substitution in premembrane was absent in all 7 isolates. Thus, all 3 proposed mechanisms failed to explain the case of congenital Zika virus infection with microcephaly in PW2. This case clinically resembled that of a woman in Finland infected during week 11 of pregnancy while traveling in Mexico, Guatemala, and Belize (5); in that case, Zika virus was detected in the brain of the aborted fetus at week 21.

The 3 cases in pregnant women described here support the hypothesis that the timing of Zika virus infection during pregnancy might be a key contributor to the development of microcephaly during congenital Zika virus infection. PW2 was infected around week 9 of gestation, during embryonic neurulation and cortical neurogenesis, which lay the foundation for the developing brain. Infection during week 20 (for PW3) and 24 (for PW1) of gestation did not led to microcephaly. Our observations are in agreement with reports involving American lineage Zika viruses that show a high risk for microcephaly when infection occurs before week 21 (6), during weeks 7–14 (7), or during the first trimester (8–10). Our findings show that Zika viruses circulating in Asia can cause microcephaly, just like American strains.

Page created: August 17, 2018
Page updated: August 17, 2018
Page reviewed: August 17, 2018
The conclusions, findings, and opinions expressed by authors contributing to this journal do not necessarily reflect the official position of the U.S. Department of Health and Human Services, the Public Health Service, the Centers for Disease Control and Prevention, or the authors' affiliated institutions. Use of trade names is for identification only and does not imply endorsement by any of the groups named above.