Isolation and Full-Genome Characterization of Nipah Viruses from Bats, Bangladesh

Despite molecular and serologic evidence of Nipah virus in bats from various locations, attempts to isolate live virus have been largely unsuccessful. We report isolation and full-genome characterization of 10 Nipah virus isolates from Pteropus medius bats sampled in Bangladesh during 2013 and 2014.

Nipah virus (NiV) is an emerging zoonotic virus carried by bats. It is considered a global health priority by the World Health Organization and has pandemic potential because of its zoonotic nature, human-to-human transmissibility, wide geographic distribution of bat reservoir species, high case-fatality rate in humans, and lack of available vaccine or therapeutic agents (1). Although NiV or NiV-related infections have been demonstrated by serologic surveillance or PCR detection in several bat species across extensive areas, attempts to isolate live NiV have been unsuccessful; there have been only 3 successful reports: Pteropus hypomelanus bats (2) and P. vapmyrus bats (3) in Malaysia and P. lylei bats in Cambodia (4).

Bangladesh has reported seasonal outbreaks of infectious NiV almost annually since 2001, and India has reported 2 outbreaks in neighboring West Bengal, the last in 2007 (5,6). In May 2018, India reported an outbreak in Kerala State, which is >1,800 km southwest of West Bengal (https://www.searo.who.int/entity/emerging_diseases/links/nipah_virus_outbreaks_sear/en/).

Despite sustained efforts to detect NiV in bats in this region, current infection data are largely from serologic and limited PCR detection of virus RNA from potential bat reservoirs, such as P. medius from Bangladesh and India (7–10). NiV genomic data from the region have come primarily from human cases (11,12). Spillover might not be limited to humans in Bangladesh; nonneutralizing antibodies against NiV in cattle, goats, and pigs (13) underscore the urgency of characterizing diversity of henipaviruses in P. medius bats and other possible animal reservoirs in the region.

We report isolation of NiVs from P. medius bats in Bangladesh. We performed full-genome characterization of these viruses by using enrichment-based next-generation sequencing (NGS).

During January 2011–April 2014, we collected 2,749 bat samples from various ongoing projects in the region. We collected samples nondestructively from individual bats as described (7) and collected environmental urine samples from underneath roosts by using polyethylene sheets. In early 2013, an outbreak of infection with NiV occurred in 13 districts of Bangladesh (Gaibandha, Jhinaidaha, Kurigram, Kushtia, Magura, Manikganj, Mymenshingh, Naogaon, Natore, Nilphamari, Pabna, Rajbari, and Rajshahi). In April 2013, we collected only urine samples during an outbreak investigation in Raipur, Manikganj. We also tested 944 underroost urine samples, 829 throat swab specimens, and 976 urine samples from 2 confirmed bat species (P. medius and Rousettus leschenaultia) for NiV. Samples were collected with permission from the Government of Bangladesh Forestry Office and under Institutional Animal Care and Use Committees (Tufts University no. G2011-12 and University of California at Davis no. 19300). 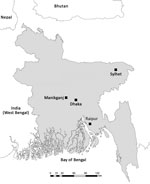 Figure 1. Sampling sites (Raipur, Manikganj, and Sylhet) for bat reservoirs of Nipah virus and location of the capital, Dhaka, in Bangladesh. Map was generated by using ArcGIS version 10.4.1 software (<>

We also collected bat samples from 5 sites in Raipur that showed NiV spillover and 1 district (Sylhet) that had no reported cases (Figure 1). Samples were tested at the CSIRO Australian Animal Health Laboratory under BioSafety Level 4 containment. Individual samples were pooled into groups of 4 for initial extraction and PCR analysis. Of 688 pooled samples tested, 20 pools were positive by a nucleoprotein gene–specific 1-step reverse transcription quantitative PCR. The 80 individual samples from positive pools were thawed for virus isolation and RNA reextracted for PCR. Of 80 samples (urine and throat swab specimens) tested by nucleoprotein gene–gene specific 1-step reverse transcription quantitative PCR, only 20 urine samples were positive. We used these 20 urine samples for virus isolation.

We performed virus isolation under BioSafety Level 4 containment. For virus isolation from PCR-positive samples, we prepared Vero cells in 96-well plates in Eagle minimum essential medium (EMEM) containing 10% fetal bovine serum and 1× antibiotic–antimycotic mixture (GIBCO, http://www.biosciences.ie/gibco). We added 50 μL of each sample to 2 wells, incubated each sample for 90 min, remove the inoculum, and added 200 μL EMEM to each well. Plates were incubated at 37°C, checked at 7 days postinfection for a cytopathic effect (CPE), and frozen at −80°C.

A total of 11 wells showed CPE, and putative virus culture from these wells was passaged a second time by inoculation of a 24-well plate containing 80% confluent Vero cells in EMEM with 80 μL of culture supernatant from each positive well. Plates were incubated at 37°C for 90 min; inoculum was removed and 1 mL EMEM added. Plates were then incubated at 37°C for 5 days. All 11 samples remained CPE positive after this second passage.

For a third passage, we harvested culture supernatant and added 300 μL to a 25-cm flask containing 80% confluent Vero cells. Flasks were incubated for 90 min at 37°C before inoculum was removed and 5 mL EMEM added. We incubated the flasks at 37°C and harvested virus supernatants at 2–3 days postinfection. Supernatants were clarified by centrifugation at 10,000 × g for 5 min and frozen at −80°C.

To confirm the identity of isolated viruses, we subjected each sample to electron microscopy and PCR. All isolates had morphology consistent with NiV and were positive by NiV-specific PCR. Virus stocks were amplified in Vero cells, and supernatants were harvested and clarified by centrifugation at 10,000 × g for 10 min, followed by pelleting virus from supernatant by centrifugation at 200,000 × g for 30 min. Virus pellets were resuspended in 200 μL of Magmax Buffer (Applied Biosystems, https://www.thermofisher.com/us/en/home/brands/applied-biosystems.html) for RNA extraction according to the manufacturer’s protocol.

We used a virus enrichment strategy (14) to obtain the full-genome sequence for NiV isolates. Total RNA was used to prepare NGS libraries (New England Biolabs, https://www.neb.com/) according to the manufacturer’s instructions. DNA libraries were subjected to a liquid-based target capture method to separate and enrich for specific NiV sequences. NiV-specific 120-mer biotinylated DNA baits were designed to capture the entire genome. Hybridized probes and captured NiV genetic material were immobilized on magnetic beads, and contaminating host material was washed away, which increased the number of virus-specific reads. We mapped all reads to NiV sequence JN808863 by using the Map to Reference Function in Geneious version 7.1.6 (https://www.geneious.com/previous-versions/). The consensus nucleotide sequence was selected by majority rules at each site.

To ascertain 5′ and 3′ ends because of low coverage and PCR errors and chimeras, we downloaded full-genome NiV sequences from GenBank and aligned them by using MAFFT in Geneious. A 90% similarity threshold was used to generate consensus 5′ and 3′ sequences of 120 nt. Final consensus full genomes had 10× coverage. We downloaded full-genome henipaviruses from GenBank, generated alignment by using the MAFFT plugin in Geneious, and tested node robustness by using 1,000 bootstrap replicates under the general time reversible plus gamma model in PHYML (15).

Figure 2. Phylogenetic tree of Nipah viruses from bats in Bangladesh (bold) compared with other henipaviruses, generated from full-genome sequences. Tree was constructed by using a maximum-likelihood approach, and robustness of nodes was...

Full-length genome sequences were obtained from 10 bat NiV isolates. We constructed a phylogenetic tree (Figure 2) that showed all bat isolates had nearly identical genome sequences; there was 99.9% conservation among all 10 genomes characterized (Table). The virus isolated in Sylhet during January 2013 was nearly identical to all other isolates obtained in 2013 in Raipur, which is ≈350 km from Sylhet, suggesting that NiV homogeneity might be supported by bat movements connecting disparate bat colonies (10).

We report isolation of NiV from P. medius bats, a natural virus reservoir in Bangladesh. With an improved enrichment-based NGS strategy, we generated complete genome sequences for 10 bat NiV isolates with higher efficiency than for traditional PCR-based sequencing methods. NiV has been difficult to isolate from bats and, similar to results of previous studies of Hendra virus (10), we observed that successful virus isolation does not correlate with cycle thresholds. The complete sequence identity match among isolates obtained during the outbreak investigation in Raipur suggests that multiple strains were not co-circulating in the bat population at the time, supporting results of a previous study in Faridpur (10).

Dr. Anderson is a virologist at Duke–National University of Singapore Medical School, Singapore. Her research interests are paramyxovirus pathogenesis and pathogen discovery by using novel molecular and serologic approaches.

We thank Ina Smith and Vicky Boyd for providing assistance and support during this study, Sandy Crameri for performing the electron microscopy, and Jordan Menscher for his help collecting bat roost urine samples. We also thank the Forest Department, Government of Bangladesh, for their support and for providing permission and the appropriate permits to conduct the study.

Isolation and Full-Genome Characterization of Nipah Viruses from Bats, Bangladesh