We report 2 cases of melioidosis in women with diabetes admitted to an emergency department in the US Virgin Islands during October 2017. These cases emerged after Hurricanes Irma and Maria and did not have a definitively identified source. Poor outcomes were observed when septicemia and pulmonary involvement were present.

Melioidosis is caused by Burkholderia pseudomallei, a saprophytic, gram-negative bacillus endemic to tropical regions worldwide (1). Diagnosis is difficult because of wide-ranging clinical manifestations (2), and this bacterium is innately resistant to many antimicrobial drugs, making treatment options limited, complex, and lengthy (3). Infection occurs by percutaneous exposure, inhalation, or ingestion.

Melioidosis is rare in the United States, and cases are usually travel related (4,5). However, regional endemicity has been documented in Puerto Rico (6), and sporadic human cases have been reported in the Caribbean (5,7). In September 2017, the US Virgin Islands were affected by 2 category 5 hurricanes, Irma and Maria; widespread flooding continued for weeks. We describe the clinical manifestations, management, and outcome of posthurricane melioidosis cases in 2 women in St. Thomas and St. John, US Virgin Islands.

Despite major damage to the 2 hospitals in the territory during the 2 hurricanes, the Virgin Islands Department of Health (VIDOH) maintained surveillance at both emergency departments. Two isolates were recovered from each patient. Local specimen analysis for organism identification was performed by using the MicroScan WalkAway System (Siemens Healthcare Diagnostics, https://www.siemens-healthineers.com). All isolates were confirmed as B. pseudomallei at the Centers for Disease Control and Prevention (CDC; Atlanta, GA, USA). Whole-genome sequencing and single-nucleotide polymorphism analysis were performed (National Center for Biotechnology Information, https://www.ncbi.nlm.nih.gov, Project PRJNA488733). Genomes from a given patient were clonal to each other. However, representative genomes from both patients had differences (>5,600 single-nucleotide polymorphisms), indicating the presence of different strains in these infections. Genomic comparison with a reference panel indicated that the isolates were within the previously described Western Hemisphere clade and subclade associated with the Caribbean (8).

Patient 1 was an 80-year-old female resident of St. Thomas who had a history of cardiomyopathy and type II diabetes mellitus. She came to the emergency department (ED) at Schneider Regional Medical Center (St. Thomas, US Virgin Islands) because of shortness of breath (symptom onset 28 days after Hurricane Irma and 9 days after Hurricane Maria). Her symptoms were worsened orthopnea, increased abdominal girth, and edema, consistent with her symptoms at previous admissions. The patient was admitted for management of acute decompensated heart failure.

The patient had a temperature of 98.5°F; diffuse pulmonary crackles; jugular venous distension; normal heart sounds; and bilateral, lower extremity pitting edema. Examination showed a focal area on the anterior left thigh that had a central, firm, warm, erythematous, tender, subcutaneous nodule ≈2 cm in diameter with a central fluctuant area and a small pinhole. Incision and drainage was performed, and a swab specimen of purulent drainage was sent for culture.

The patient was given intravenous clindamycin (600 mg every 8 h for 5 d) and was discharged while receiving oral clindamycin, but the treatment course was not completed. Cultured wound showed growth of B. pseudomallei at ≈5 days. However, culture growth was not yet positive before patient discharge. The isolate was susceptible to trimethoprim/sulfamethoxazole (Table 1). 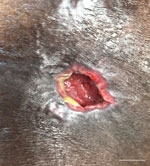 Figure. Cutaneous melioidosis lesion in case-patient 1 after Hurricanes Irma and Maria, St. Thomas/St. John District, US Virgin Islands, October 2017. This lesion was on the left anterior thigh and had a...

Patient 1 returned to the ED 2 weeks later because of manifestations similar to those at the first visit. She was afebrile and admitted for diuresis. The left thigh lesion had progressed into a 2-cm, tender, shallow ulcer productive of purulent material surrounded by erythema and a focal area of induration (Figure). Laboratory data reflected a leukocyte count within reference ranges and mild renal insufficiency with estimated glomerular filtration rate of 40.47 mL/min (Table 2).

Patient 2 was a 60-year-old female who was a resident of St. John who had diabetes. She was referred to the ED at Schneider Regional Medical Center by her primary care physician because of hyperglycemia, productive cough, and malaise for 1 week (symptom onset 46 days after Hurricane Irma and 33 days after Hurricane Maria). The patient was admitted to the intensive care unit because of community-acquired pneumonia.

The patient was lethargic and had a temperature of 101°F; heart rate was 99 beats/min, respiratory rate 22 breaths/min, and blood pressure 142/81 mm Hg. Blood gas testing showed pO2 of 47.6 mm Hg with an oxygen saturation of 87.2% on 2-liter nasal cannula. A chest radiograph showed a left-sided mild infiltrate, and her leukocyte count was markedly increased (28.3 × 103 cells/mm3) (Table 2).

The patient was given intravenous ceftriaxone (1 g/d) and azithromycin (500 mg/d) after blood and sputum cultures were prepared. She required bilevel positive airway pressure but eventually required mechanical ventilation. The patient then became hypotensive and required norepinephrine to maintain a main arterial pressure >65 mm Hg. Ceftriaxone was discontinued, and she was given intravenous piperacillin/tazobactam (3.375 g every 6 h). Trimethoprim/sulfamethoxazole- and ceftazidime-sensitive B. pseudomallei were identified from sputum culture after 72 hours (Table 1). Methicillin-sensitive Staphylococcus aureus and Candida glabrata were also identified. One of 2 blood cultures was positive for gram-negative rods. Piperacillin/tazobactam was discontinued, and the patient was given meropenem (1 g every 8 h).

The patient remained critically ill and was transferred to a tertiary care hospital in the continental United States. She died in a long-term care facility during October 2018 without showing signs of neurologic improvement.

Both patients were interviewed to determine travel history and possible exposure sources. Patient 1 traveled occasionally to the southeastern United States; her last travel date was 3 months before her illness. This patient reported flooding and water damage to her home from the hurricanes, but did not report contact with flood waters. Patient 2 reported no travel history before the hurricanes.

VIDOH has investigated and confirmed a subsequent case-patient with pulmonary melioidosis in St. Thomas during December 2018 (I. Guendel et al., unpub. data). This case-patient reported no recent travel and might have had occupational exposure as a professional gardener. This person had 2 risk factors (type II diabetes mellitus and heavy use of alcohol).

Given regional occurrence, detection of melioidosis in the US Virgin Islands is not surprising. Furthermore, emergence of melioidosis after extreme weather events has been well documented, and cases were likely acquired locally from storm-related exposure to flooded soil, surface water runoff, or generation of coarse aerosols (12,13). Although detection of B. pseudomallei has yet to be confirmed in the environment, it might be endemic to the US Virgin Islands, as in Puerto Rico.

In January 2018, melioidosis was listed as a reportable disease in the US Virgin Islands. Future actions include disease education efforts for physicians and laboratory staff because misdiagnosis is common (14). Awareness campaigns highlighting preventive measures for the public are necessary because risk factors are prevalent in the local population (e.g., diabetes and other chronic disease) and might be exacerbated under disaster settings (e.g., respiratory effects and open wounds). VIDOH has implemented rapid diagnostic testing by using Active Melioidosis Detect (InBios International, https://inbios.com) on suspected specimens for prompt on-island case identification while routine ED diagnostic cultures are performed (5). All confirmatory testing is conducted at CDC.

Dr. Guendel is an epidemiologist at the US Virgin Islands Department of Health. Her research interests are emerging and remerging infectious diseases.

This study was supported by the Epidemiology and Laboratory Capacity for Infectious Diseases Cooperative Agreement from the Centers for Disease Control and Prevention.