During 2013–2016, a total of 32 patients were treated for Crimean-Congo hemorrhagic fever in Prishtina, Kosovo; 11 died. In the 11 patients who died, findings included viral loads >1 × 108.5/mL, lactate dehydrogenase >2,700 U/mL, bleeding, and impaired consciousness. Ribavirin therapy had no noticeable effect in this small patient sample.

Crimean-Congo hemorrhagic fever (CCHF), caused by an orthonairovirus of the Nairoviridae family, is usually transmitted by bites of Hyalomma sp. ticks. Case-fatality rates vary from 10% to 40%. Most cases are reported from the Balkans, the Middle East, and Asia (1), but CCHF virus is now also found in Hyalomma ticks in Spain, where human CCHF cases have occurred (2,3).

Incubation of CCHF may take up to 9 days. Signs and symptoms usually start 1–3 days after the tick bite and include sudden onset of fever, myalgia, neck stiffness, photophobia, vomiting, diarrhea, sore throat, agitation, and confusion; 2–4 days later, drowsiness and pain in the right upper quadrant of the abdomen may ensue. Other signs and symptoms include tachycardia, petechiae, and lymphadenopathy. Approximately 30% of patients die >5 days after disease onset or later, typically from bleeding or multiorgan failure (5).

We present a retrospective analysis of all 32 CCHF cases from the Infectious Diseases Hospital of Hasan Prishtina University (Prishtina, Kosovo) during May 2013–July 2016. We obtained a statement of approval from the Committee of Professional Ethics of the University Clinical Center of Kosovo (filed under no. 1555 on October 27, 2017). 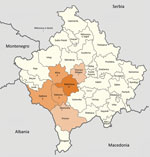 Figure 1. Municipalities (komunë) in Kosovo, showing number of patients with Crimean-Congo hemorrhagic fever in each municipality. Map was obtained from Wikimedia, where it is available to the public under the GNU Free...

Eleven patients died, including 1 vertically infected female newborn; 21 survived. The median duration between initial symptoms and hospital admission was 2.5 days (range 0–7 days). Neither χ2 testing nor regression analysis showed a relationship between the duration of symptoms at hospitalization (or at the start of ribavirin) and outcome.

Of the 6 patients who did not receive ribavirin, 2 died. Of the 26 patients who received intravenous ribavirin, 9 died. Ribavirin had no effect on outcome; however, the sample size was small. The median duration between the start of symptoms and administration of ribavirin was 3.5 days (range 1–12 days). Univariate regression (odds radio [OR] 13.3, 95% CI 1.3–134; p = 0.028) and χ2 testing (p = 0.055) suggested a possible association between starting ribavirin <5 days after disease onset and an increased probability of death. However, this effect was not significant after controlling for viral load (p = 0.19).

Signs of central nervous system (CNS) impairment (coma, somnolence, fasciculations) and bleeding showed the strongest interdependence with clinical outcome (Table 1). A weaker interdependence was shown for jaundice, diarrhea, and hiccups. Among the laboratory parameters, a viral load >1 × 108.5 copies/mL, lactate dehydrogenase (LDH) >2,200 U/mL, and leukocyte count >7,700 cells/µL were associated with death. We saw a nonsignificant trend toward interdependence between platelet counts <50,000/µL and death (p = 0.057). We found no association with outcome for aspartate aminotransferase, alanine aminotransferase, or other laboratory parameters (data not shown).

We saw no influence on death risk with other signs or symptoms (Table 2). Ribavirin therapy did not influence death risk (OR 1.059; p = 0.952) in the small sample size.

Our results showed that the strongest clinical predictors of death from CCHF were bleeding and neurologic involvement. We saw somnolence or coma in all 11 fatal cases and bleeding in 9. In 2 patients, intracerebral bleeding could not be excluded because computed tomography or magnetic resonance imaging scans were not available. Therefore, the question whether all fatal neurologic complications in CCHF are caused by hemorrhage remains open.

Of laboratory parameters, the strongest predictors of death were viral load >1 × 108.5 viral genome copies/mL (OR 80) and LDH level >2,700 U/mL (OR 37.5). The predictive value of viral load has been described in Kosovo and Turkey (7,8). High viral loads predicted high LDH levels, which in turn predicted complications and death. CCHF virus infection may induce organ failure by causing apoptosis of several cell types of endothelial and parenchymal origin (9). Other factors probably contribute to CCHF pathology also.

We saw a higher case-fatality rate in Kosovo (34%) than that reported in Turkey (11%) (8). Although the virus clade circulating in Kosovo was probably introduced from Turkey in the 1970s, it is possible that the high genetic viral diversity found in fatal CCHF cases in Kosovo increases CCHF pathogenicity (10).

Our study did not detect any benefit of intravenous ribavirin for CCHF; however, even a recent Cochrane meta-analysis has not answered the question whether ribavirin is beneficial in CCHF (11). A murine treatment study suggests that ribavirin is insufficiently effective even when given before disease onset (12). To improve the prognosis for CCHF, new antiviral substances that effectively curb virus replication are needed.

Dr. Ahmeti is a professor of infectious diseases at Hasan Prishtina University and head of the Infectious Diseases Hospital of Prishtina, Republic of Kosovo. He has a special interest in Crimean-Congo hemorrhagic fever and other viral hemorrhagic fevers.

We thank the nurses of the Infectious Diseases Hospital of Prishtina, Kosovo, for their extraordinary dedication and contribution to the care of patients with CCHF.

Funding was provided by the German Ministry of Foreign Affairs (project no. ZMV-16 2513AA0277). The funder had no role in study design, data collection and analysis, decision to publish, or preparation of the manuscript.