Schistosomiasis is frequently detected in persons entering Europe. In 2017, we detected a Schistosoma mansoni–Schistosoma haematobium hybrid parasite infection in a migrant boy from Côte d’Ivoire entering France. Because such parasites might be established in Europe, as illustrated by an outbreak on Corsica Island, vectors of these parasites should be investigated.

In 2017, a 14-year-old boy from Côte d’Ivoire who had crossed the Sahara Desert through Niger and reached Europe by sea from Libya was referred to the Consultation Board at the Parasitology Unit of Angers University Hospital (Angers, France) for painless gross hematuria. Aside from hematuria, his physical examination was unremarkable. Blood tests revealed microcytic anemia (hemoglobin 103 g/L, mean corpuscular volume 57.1 fL, mean corpuscular hemoglobin concentration 285 g/L) and a low serum ferritin level (8 µg/L). Leukocyte and eosinophil counts and biochemical markers of liver and kidney function were within reference limits. Serologic test results were negative for antibodies to HIV, hepatitis B and C virus, and Treponema pallidum. Serodiagnostic test results were negative for cystic and alveolar echinococcoses and strongyloidiasis, and schistosomiasis screening test results were inconclusive: positive by Schistosoma mansoni–specific ELISA (optical density 1.02, threshold 0.53; Bordier Affinity Products, http://www.bordier.ch/) and negative by S. mansoni indirect hemagglutination test (titer 1:40, threshold 1:160; Bilharziosis Fumouze; https://www.biosynex.com/). 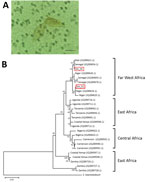 To clarify diagnosis, we performed the SCHISTO II Western Blot IgG (LDBio Diagnostics, http://www.ldbiodiagnostics.com/), which showed 5 unequivocal bands, including a large band at 22–24 kDa and 30–34 kDa, results indicative of schistosomiasis. We corroborated our results by microscopic examination of patient feces and urine. We detected lateral-spined eggs (typical of S. mansoni parasites) in a fecal specimen processed by using the Kato-Katz method and, surprisingly, lateral-spined eggs and terminal-spined eggs (typical of Schistosoma haematobium parasites) in a 24-hour urine specimen filtered through a 12-micron membrane (Figure, panel A). The patient received a single 40 mg/kg dose of praziquantel. The patient experienced no more episodes of hematuria for the following 6 months; however, we could not assess his parasitological responses.

Schistosomiasis represents a serious disease burden worldwide and is ranked the 12th most common travel-associated infection in Europe (2). The migration crisis has led to a large flow of persons (notably children) from West Africa. Unaccompanied foreign minors are protected under the 1989 United Nations Convention on the Rights of the Child (https://www.ohchr.org/en/professionalinterest/pages/crc.aspx). Moreover, because of the high prevalence of schistosomiasis in their countries of origin, these children receive care for this disease upon their arrival in Maine-et-Loire Department (Loire Valley, France). This preventive strategy enabled us to diagnose schistosomiasis in ≈25% of travelers and migrants (Y. Le Govic, unpub. data), a result in accordance with a similar screening program in Italy (3). This strategy also enabled us to detect the case of mixed Schistosoma parasite infection with ectopic egg elimination described in this report.

Ectopic egg elimination (i.e., S. haematobium schistosome eggs in feces and S. mansoni eggs in urine) frequently occurs in endemic areas; in a study in northern Senegal, 53% of patients infected with Schistosoma parasites had simultaneous infections with S. mansoni and S. haematobium parasites, of which 15% displayed ectopic egg elimination (4). This phenomenon can occur because of parasite hybridization. Hybrids resulting from S. mansoni and S. haematobium schistosome cross-breeding have been documented in northern Senegal (5). The fact that the patient we describe never traveled through Senegal strongly suggests that such hybrids are more widespread than previously observed.

The risk for emergence of S. mansoni schistosome infection might exist in Europe; the Biomphalaria snail vector (namely B. tenagophila) has been detected for several years in Romania (9). Given the nonnegligible prevalence of mansonic schistosomiasis in travelers and migrants entering Europe (3,10) and global warming, the probability of encounters between S. mansoni miracidia and their snail hosts might have increased. Moreover, whether S. mansoni–S. haematobium hybrid parasites are capable of infecting the Bulinus snail vector of the S. haematobium schistosome, which is widely distributed throughout Europe (France, Spain, Italy, Greece, Portugal) (11), remains unknown and deserves further investigation.

Dr. Le Govic is a clinical biologist and researcher in Angers University Hospital Center, University of Angers, Angers, France. His primary research interests include emerging fungal and parasitic infections, with a special emphasis on epidemiology, pathophysiology, and diagnosis.