Severe fever with thrombocytopenia syndrome virus (SFTSV), a new tickborne phlebovirus of the Phenuiviridae family (previously Bunyaviridae), causes severe fever with thrombocytopenia syndrome (SFTS) in China, Japan, and the Republic of Korea (South Korea) (1). After identification of the first human case of SFTS in South Korea in 2013 (1), 335 cases (73 deaths; case-fatality rate 21.8%) were reported during 2013–2016 (2).

SFTSV is primarily transmitted through a tick bite. The Haemaphysalis longicornis tick is the main vector for SFTSV, promoting its circulation and transmission (3). Investigations have been conducted to determine the frequency of exposure of companion animals, wild animals, and livestock to SFTSV (4–7). Of particular importance, dogs are companion animals that have frequent contact with humans. Therefore, their infection status has major implications for public health. We isolated SFTSV from dog serum and determined the prevalence of SFTSV in dogs in South Korea.

We collected 103 serum samples during June–October 2016 from the following dog breeds: 42 Belgian Malinois, 58 German shepherds, and 3 Labrador retrievers. All dogs were military dogs in a training camp in Gangwon Province, South Korea, at the time of serum collection. The animals had no significant clinical signs associated with febrile disease. Information about body temperature, evidence of tick bites, blood chemistry, and complete blood count was unavailable. 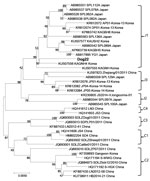 We used Vero cells to isolate the virus from positive serum. We observed cytopathic effect in only 1 of 3 positive samples. The results of phylogenetic analysis of the complete S segment indicated that the SFTSV strain isolated from dog 22 had not previously been isolated; this strain clustered with many SFTSV strains from South Korea and Japan (Figure).

H. longicornis ticks are the main vector of SFTSV and the dominant tick species collected from vegetation and animals in South Korea (3,7,8). However, because of the low SFTSV prevalence in ticks, mammalian hosts might be necessary for the circulation and maintenance of SFTSV in nature. Therefore, studies measuring the prevalence of SFTSV infection across various animal species have been undertaken (4–7). Only a few studies on SFTSV in dogs have been reported; these studies found that 1) the positive rates for SFTSV RNA were 5.3% (19/359) for domesticated dogs in China (5) and 0.2% (1/426) for shelter dogs in South Korea (6) and that 2) 28.9%–37.9% of domesticated dogs in China (4,5,9) and 13.9% of shelter dogs in South Korea (10) were seropositive for antibodies against SFTSV.

The detection rates of SFTSV RNA and antibodies in our study were 2.9% and 21.4%, respectively, which were higher than those observed in shelter dogs in South Korea (6). These results have 2 possible explanations. First, we collected samples during the summer, when dogs most easily and frequently have contact with ticks infected with SFTSV. In contrast, in the shelter dog study, the timing of sample collection was random and occurred throughout multiple seasons. Second, we drew serum from military dogs, which typically spend most of their time outside of the home; conversely, the shelter dog study examined small dogs that resided indoors before their relocation to a shelter.

Although we isolated only a few SFTSV strains from animals and our results could not represent all characteristics of SFTSV, our findings could indicate that SFTSV might not be host-specific and that various SFTSV clades circulate and are distributed in South Korea. Further studies continuously surveilling animals for SFTSV, along with whole-genome analysis of dog-derived Korean isolates of SFTSV, would help clarify the mechanisms of transmission and molecular evolution of SFTSV.

This research was supported by the Government-wide R&D Fund for Infectious Diseases Research (HG18C0021) and the Basic Science Research Program through the National Research Foundation of Korea funded by the Ministry of Education (NRF-2015R1C1A1A01054518).