In a 12-month nationwide study on the prevalence of drug-resistant tuberculosis (TB) in Lebanon, we identified 3 multidrug-resistant cases and 3 extensively drug-resistant TB cases in refugees, migrants, and 1 Lebanon resident. Enhanced diagnostics, particularly in major destinations for refugees, asylum seekers, and migrant workers, can inform treatment decisions and may help prevent the spread of drug-resistant TB.

Populations in crisis-affected areas are particularly vulnerable to tuberculosis (TB) linked to malnutrition, overcrowding, and discontinuity in health services (1,2). Difficulties accessing diagnosis and starting or completing appropriate treatment can promote the emergence and spread of multidrug-resistant (MDR) TB (resistant to at least rifampin and isoniazid) and extensively drug-resistant (XDR) TB (additionally resistant to >1 second-line injectable drug and 1 fluoroquinolone) in the countries of origin or in countries of transit or refuge after migration (3).

Lebanon hosts the largest per capita refugee population in the world. In addition to 450,000 refugees from Palestine, ≈1.5 million refugees from Syria are scattered in hundreds of informal sites across the nation (2,4). Moreover, the country hosts >250,000 migrant domestic workers, mostly originating from regions with high TB incidence rates, such as Ethiopia, Bangladesh, the Philippines, and Sri Lanka (5).

The last national survey on the prevalence of drug-resistant TB in Lebanon was performed 15 years ago (6), well before the beginning of the Syria crisis in 2011. Even most recent reported MDR TB rates largely relied on estimates rather than on systematic laboratory confirmation (6). Second-line drug susceptibility testing (DST) and individualized XDR TB treatments were not available. We report results from a June 2016–May 2017 nationwide study combining extensive phenotypic and molecular testing. This national survey was approved by the ethics committee of the Azm Center for Research in Biotechnology and Its Applications, Lebanese University (document no. CE-EDST-3-2016), authorized by the Lebanese Ministry of Public Health. Informed consent was obtained from the study patients.

The study included 720 cases of suspected TB, corresponding to all suspected cases reported from June 1, 2016, through May 31, 2017, to the TB centers from the 9 governorates that make up Lebanon’s national TB program. After testing of all corresponding microscopy-positive and microscopy-negative samples, 284 were considered confirmed TB cases on the basis of solid (Lowenstein-Jensen [LJ]) or liquid (BBL MGIT Mycobacteria Growth Indicator, BD Diagnostics, http://www.bd.com) culture results or molecular testing results (Xpert MTB/RIF, Cepheid, http://www.cepheid.com). For samples contaminated with blood, Anyplex MTB/NTM Real-time Detection (Seegene, http://www.seegene.com) (Appendix 1) was used. Thirty-four cases could not be subjected to DST because of culture negativity (n = 28), contamination (n = 3), insufficient sample amount for culture (n = 2), or reagent contingencies (n = 1).

Rifampin resistance was detected among 7/250 (2.8%) patients, concordantly with Xpert testing results for all cases (Table 1). We used multivariate logistic regression to test TB history as an independent predictor of rifampin resistance, after adjusting for age, sex, and nationality (Appendix 1). Log-linearity was checked for age. A 2-tailed type I error rate was set at 5%. TB history information was available for 246 (98.4%) patients. The proportion of rifampin resistance was 22.2% (4/18) among previously treated patients and patients with relapse and 1.3% (3/228) among patients with new TB cases (adjusted OR 21.4, 95% CI 4.4–105.2; p<0.01). One case in a patient without previous TB history was confirmed by liquid culturing DST as monoresistant to rifampin; 3 other cases, including 1 in a patient without previous TB history, were MDR TB, 2 of which showed resistance to all 4 first-line drugs tested (i.e., ethambutol and streptomycin in addition to rifampin and isoniazid). Moreover, 3 XDR TB cases were detected, including 1 in a patient without previous TB history, showing phenotypic resistance to amikacin, kanamycin, and levofloxacin in addition to all 4 first-line drugs tested. Among all 250 cases, 203 (81.2%) were susceptible to all 4 first-line drugs, 9 (3.6%) were resistant to isoniazid only, 1 (0.4%) to ethambutol only, 23 (9.2%) to streptomycin only, and 7 (2.8%) to isoniazid and streptomycin (Table 1). 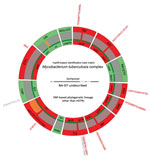 Figure. Deeplex-MycTB (GenoScreen, https://www.genoscreen.fr) results identifying an extensively drug-resistant genotypic profile in an isolate from a tuberculosis (TB) patient in Lebanon. Results correspond to TB patient no. 185 in

Results of genotypic analysis of the 3 MDR TB isolates by Deeplex-MycTB also were consistent with phenotypic profiling overall, considering that a rare F129S mutation in katG was previously described in association with isoniazid resistance (11), along with other well-established mutations. An ethambutol resistance–associated M306V mutation in embB in 1 isolate was phenotypically undetected, probably reflecting known poor phenotypic reproducibility for this mutation (10). Of note, in the same isolate, Deeplex-MycTB testing detected a gyrA S91P mutation, which generally confers low levels of levofloxacin resistance (12), as a minority population (5.2%). This detection was confirmed by Anyplex results but was not correlated with phenotypic resistance to levofloxacin tested at a standard critical concentration of 1.5 µg/mL. As with the XDR TB isolates, nonsense insertion or deletion mutations additionally detected in pncA or ethA predicted supplementary pyrazinamide and ethionamide resistance in some isolates.

None of the MDR or XDR TB cases clustered with any other case in the study population tested by standard 24-locus mycobacterial interspersed repetitive unit–variable-number tandem-repeat (MIRU-VNTR) typing of isolates, showing no support for drug-resistance transmission (Appendix 2). Consistently, 4 of the 6 cases involved were previously treated, and the 2 new cases were in migrant workers, presumably representing imported cases. Two cases were in Syria refugees; 1 patient with MDR TB had repeated failed treatment in Syria, and 1 XDR TB case was a relapse after patient arrival in Lebanon. Of the other previously treated cases, 2 had Beijing strain genotypes; the isolate from an XDR TB case in a patient originating from eastern Europe differed by a single allele from the 100-32 MIRU-VNTR haplotype and the isolate from an MDR TB case in a patient from Lebanon fully matched the 100-32 MIRU-VNTR haplotype (Table 2). This haplotype represents a major, presumably highly transmissible MDR-associated clonal complex epidemically spreading across Eurasia (13). Although an XDR TB patient of foreign origin returned to his country after diagnosis because of initial unavailability of proper treatment in Lebanon, the 2 other XDR TB patients received treatment and, as of January 2019, responded positively to ongoing treatments, as were the patients treated for MDR TB.

Although the prevalence of rifampin-resistant TB estimated in Lebanon is relatively low (2.8%), identification of XDR TB and MDR TB cases, including TB strains with strong epidemic potential and complex resistance patterns, calls for sustained diagnosis of MDR TB. We recommend that Lebanon test all TB-positive isolates for resistance to first- and second-line drugs, to inform treatment decisions and prevent the spread of drug resistance. Other major destinations for refugees, asylum seekers, and migrant workers should also consider using enhanced diagnostics to help prevent the spread of drug-resistant TB.

Ms. El Achkar is a PhD student with supervision shared between Université de Lille and Université Libanaise. Her work focuses on TB drug resistance and transmission in Lebanon.