Human infections with vaccinia virus (VACV), mostly from laboratory accidents or contact with infected animals, have occurred since smallpox was eradicated in 1980. No recent cases have been reported in China. We report on an outbreak of VACV from occupational exposure to rabbit skins inoculated with VACV.

Vaccinia virus (VACV; genus Orthopoxvirus [OPV]) is used as a lyophilized live virus vaccine against smallpox, variola virus (1). VACV, cowpox virus, and monkeypox virus are OPVs of concern because of pathogenicity in humans, possible adverse effects in vulnerable populations, potential spread and introduction in other areas, and public health burden (2). After smallpox was declared eradicated in 1980, mandatory routine vaccination was suspended worldwide, including in China (3). Immunological cross-reaction herd immunity to OPVs also subsided. Those who might have contact with OPVs often receive VACV vaccination, including those collecting OPV samples, responding to outbreaks, treating patients, or handling OPVs in the laboratory, as well as military personnel, especially in the United States.

Human infections with OPVs frequently emerge or reemerge, including cowpox virus in Europe (4), monkeypox virus in Africa and North America (5), buffalopox in India (6), and VACV in South America (7), especially in Brazil (8). Most human cases have occurred from occupational exposure to infected animals or laboratory accidents, such as needle sticks or eye splashes (9). No human cases of VACV infection have been reported in China in recent decades.

Figure 1. Images from outbreak of vaccinia virus (VACV) from occupational exposure, China, March 2017. A) Lesion on thumb of case-patient 1; B, C) lesions on hands of case-patient 2; D) batch of...

On March 9, 2017, case-patient 1, an industrial worker, was admitted to a local hospital with high fever and a pustular eruption on his left thumb that appeared 3 days earlier (Figure 1, panel A). Case-patients 2–5 began having fever and skin lesions almost simultaneously and were seen as outpatients at community clinics during March 7–9. Case-patient 1 became ill with severe pneumonia and was transferred to a tertiary hospital for treatment on March 13.

Case-patients 2–5 were prescribed antipyretic and antiinflammatory medications, which they took for 9–16 days, and were afebrile 5–9 days after illness onset. They were advised to avoid contact with family members and friends until they were afebrile and escharosis exfoliation was complete. Case 1 was the only patient hospitalized. He was kept in isolation in the tertiary hospital until being discharged on March 24. No transmission occurred from the case-patients to other contacts, and none had scar formation.

Epidemiologic investigation and clinical manifestations raised concerns that cowpox or tularemia were likely etiologies. Nasopharyngeal swab, whole blood, and serum samples were collected from all 5 case-patients on March 14. Clinicians also collected samples of content from scabs from case-patient 1 and liquid from blisters from case-patient 2.

To establish the relationship between the illness and exposure, we collected residue from the pulverizer blade and outlet and from the surrounding floor. We used real-time PCR to detect VACV-specific nucleic acids in these specimens. We amplified the hemagglutinin gene A56R and sequenced it using an Applied Biosystems 3130 Genetic Analyzer (ThermoFisher Scientific, https://www.thermofisher.com) (11). We aligned nucleotide sequences using ClustalW (http://www.clustal.org/clustal2) and constructed a phylogenetic tree with MEGA5 (https://www.megasoftware.net). 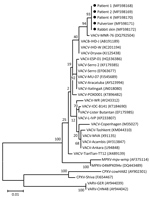 We obtained A56R gene sequences from 5 positive specimens, 1 each from case-patients 1, 2, and 4; 1 from the pulverizer; and 1 from the rabbit skin (GenBank accession nos. MF598168–72). All sequences showed 100% identity match with each other and had 99.6% identity match with isolate VACV-MNR-76 (GenBank accession no. DQ792504) (Figure 2). Unfortunately, we could not trace the vaccine strain used to inoculate the rabbits.

Epidemiologic and molecular data implicated VACV as the etiology of this outbreak, the source of which was rabbit skins inoculated with smallpox vaccine. The phylogenetic tree revealed a close relationship between the isolated strains and the TianTan strain (Figure 2), a highly attenuated VACV strain used in smallpox vaccine in China. The likely transmission route was contact with infected rabbit skins. However, we cannot exclude transmission through aerosolized or suspended infectious particles, considering all 5 case-patients had pulmonary infection and only 3 case-patients had characteristic VACV skin lesions. The transmission mode in this outbreak differs from outbreaks in Brazil and Europe, where human cases were related to contact with infected dairy cattle or to laboratory accidents (12–14).

Case-patients 3, 4, and 5 received prior smallpox vaccination and had less severe clinical manifestations than the other 2 case-patients, indicating that vaccination might have reduced illness severity but failed to protect them from infection (13). Decreased immunity over time and increased virulence of the VACV strain involved might account for the infections.

VACV is commonly used in research settings and the biopharmaceutical industry. Functional studies on extracts from rabbit skins inoculated with VACV are common in China (15). The inadvertent introduction of virulent VACV to local domestic and wild animals could cause a severe outbreak, such as occurred in Brazil (14). Besides using standard contact protections, those who handle animals vaccinated with VACV, or their products, should use proper respiratory protection. In addition, we recommend increased supervision of biopharmaceutical uses of VACV and smallpox vaccination for laboratory and other workers at risk for occupational exposure to OPVs, as recommended in the United States (3).

Dr. Lu is a senior field epidemiologist who works for Wuxi Municipal Center for Disease Control and Prevention, Jiangsu. His research interests include emerging viral infectious diseases and outbreak preparedness and rapid response.

We are grateful to those who assisted in collecting data and specimens from the local Municipal Center for Disease Control and Prevention (CDC) in Jiangyin and Peizhou counties; to Keith Dear, who helped review and edit the manuscript; and to Yayun Tan, who assisted in drawing the appendix figure.

This work was supported partly by grants from Science & Technology Demonstration Project for Major Emerging Infectious Diseases Control and Prevention (nos. BE2015714, BE2017749), National Nature Science Foundation of China (no. 81373055), National Major Science & Technology Projects for Infectious Disease Control and Prevention (no. 2017ZX10103008), and Key Medical Discipline of Epidemiology (no. ZDXK A2016008), Medical Talent (no. ZDRC A2016032), and the 333 Project of Jiangsu Province.