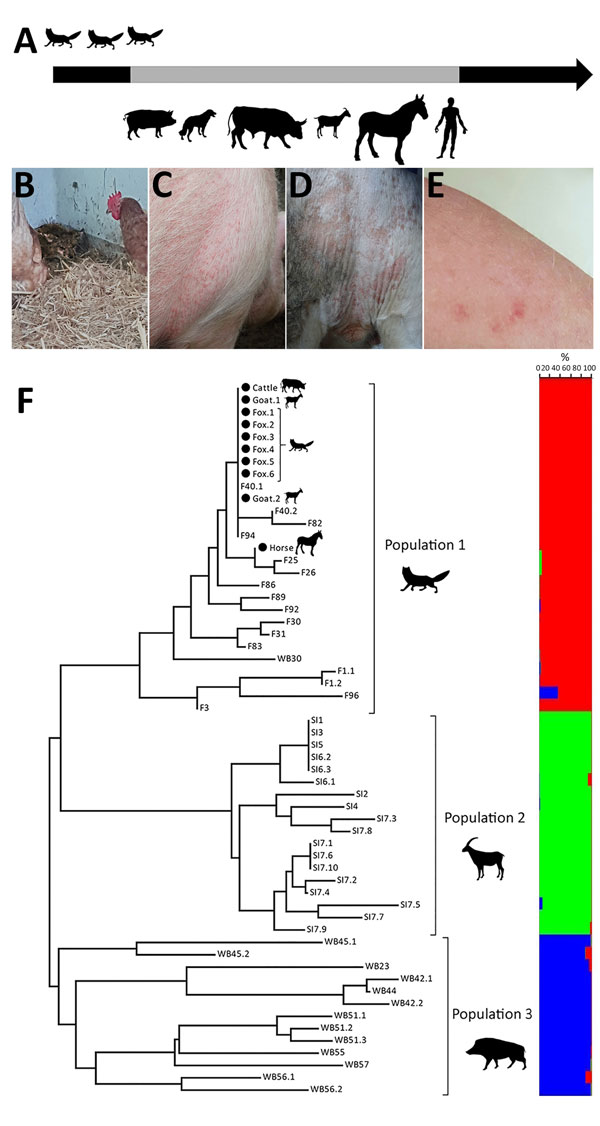 Figure. Clinical and molecular characterization of an outbreak of fox-derived Sarcoptes scabiei mites in multiple mammal species on a farm in Switzerland, 2018. A) Outbreak timeline displaying animal species (pigs [Sus scrofa domesticus], oxen [Bos taurus], dogs [Canis lupus familiaris], goats [Capra hircus], horses [Equus caballus], and red foxes [Vulpes vulpes]) showing clinical signs compatible with sarcoptic mange and humans with signs of zoonotic scabies in order of appearance. Gray portion of arrow indicates the period during which clinical signs were observed in domestic animals and humans. Foxes with mange were observed in stables up to 3 weeks before the beginning of clinical signs in livestock. B–E) Clinical signs observed in a red fox (B; lethargy, severe hyperkeratosis), a pig (C; erythematous papules on shoulder and thorax), an ox (D; alopecia and erythema in the perineal region), and a teenage girl (E; erythematous papules on an arm). F) Multilocus microsatellite analysis demonstrating the genetic relationship of 10 individual mites isolated from a horse, an ox, a goat, and a fox at the farm where the outbreak occurred (black dots) and 48 additional mites from red foxes from the same region of Switzerland (population 1); Iberian ibex (Capra pyrenaica) from southern Spain (population 2); and wild boars (Sus scrofa) from Switzerland, nearby areas of France, and northern Italy (population 3). Neighbor-joining tree (left) constructed by using distance matrices with Populations version 1.2.28 (http://bioinformatics.org/populations) and displayed by using MEGA4 (http://www.megasoftware.net). Tree branch lengths are proportional to the percent genetic distance. Bar plot (right) obtained with Structure 2.3.4 (https://web.stanford.edu/group/pritchardlab/structure.html) represents the cluster membership according to the analyses of 9 markers for K = 3 with the probability (0%–100%) for each mite to belong to a different population. Red indicates population 1, green indicates population 2, and blue indicates population 3. The 3 populations are the same as those in the distance tree. F, red fox; SI, Iberian ibex; WB, wild boar.