We identified dengue in ≈51% of patients given a clinical diagnosis of suspected dengue in Taiz, Yemen, during 2016. The cosmopolitan genotype of dengue virus type 2 was most common; viruses appeared to have originated in Saudi Arabia. Damage to public health infrastructure during the ongoing civil war might enable dengue to become endemic to Yemen.

The association between wars and dengue virus (DENV) transmission has been well-recognized. During World War II (1939–1945), extensive ecologic disruption and demographic changes created an abundance of ideal breeding sites for Aedes aegypti mosquitoes, as well as pools of susceptible military personnel and displaced populations to support the spread of dengue (1). After World War II, unprecedented population growth and rapid unplanned urbanization exacerbated the epidemic spread of dengue to the major cities of Southeast Asia and the Pacific regions (2).

The current civil war in Yemen, which started in March 2015 (3), has caused widespread destruction of the infrastructure of this country and displaced >2.2 million persons into living in cramped shelters with inadequate healthcare support. The sum of human displacement, damaged infrastructure, and poor hygiene conditions (3–5) has created an ideal environment for the spread of infectious diseases, including mosquitoborne diseases. In particular, the war has created numerous potential mosquito-breeding sites, such as open water storage containers, areas with inadequate drainage, discarded plastic containers in which water accumulates, and puddles of water (6).

The study was approved by the University of Malaya Science and Technology Medical Ethical Committee (approval no. 2016/24). A total of 436 serum specimens were obtained from patients with clinically suspected dengue (age range 1–70 years) who sought healthcare within 2–7 days after the onset of fever (Appendix Figure 1). These patients were seen at the main hospitals and medical centers that were still in operation (Figure 1) in Taiz during the study period. Samples were kept at −20°C until they were transported to the World Health Organization Collaborating Centre for Arbovirus Reference and Research (Dengue/Severe Dengue) at the Tropical Infectious Diseases Research and Education Centre, University of Malaya (Kuala Lumpur, Malaysia). 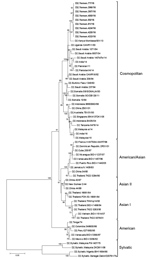 Of 436 patients with clinically suspected dengue, 119 (≈27%) were reactive by RT-RPA; among those patients, 83 (≈70%) were serotyped by RT-PCR as DENV-2. The remaining 36 RT-RPA–reactive specimens were nonreactive by RT-PCR. However, the RT-RPA is known to be more sensitive than the RT-PCR; thus, this result could be caused by low viral loads in the specimens (9). All RT-PCR–reactive specimens were further subjected to virus isolation by using the C6/36 mosquito cell line. Complete envelope (E) genes of DENV-2 were successfully amplified by using primers specific for the DENV-2 E gene (Appendix Table) and sequenced from 9 of 83 specimens after a third passage in cell culture. A phylogenetic tree constructed by using E genes suggested that the DENV-2 isolates from Yemen clustered within the DENV-2 Cosmopolitan genotype (Figure 2). The E gene sequences generated in this study are available from the European Nucleotide Archive (accession no. PRJEB27739).

Of the 317 RT-RPA–nonreactive specimens, 102 (≈32%) were positive for DENV IgM. Of 215 dengue IgM–nonreactive samples, 74 (≈34%) were positive for DENV IgG. Those samples positive for only DENV IgG were likely caused by previous exposure to DENV infection. We identified acute DENV infection in ≈51% (221 of 436) of febrile patients with suspected dengue either by RT-RPA or DENV IgM ELISA. In addition, ≈34% (74 of 215) of febrile patients who did not have dengue had previous exposure to dengue.

In this study, the prevalence of dengue among patients with suspected dengue (≈51%) in Taiz was higher than that (29%) during the previous dengue outbreak in Hodeidah in 2012 (10). The percentage of previous exposure to DENV among febrile patients was higher in Hodeidah (≈75%) than that seen in Taiz (≈34%) (10). It is possible that dengue is a relatively new disease in Taiz, but its prevalence has increased markedly, possibly because of the ongoing civil war. The febrile patients who did not have dengue seen in Taiz could have had other infections, including chikungunya and malaria, because these 2 mosquitoborne infectious diseases are also present in Yemen (chikungunya prevalence 12% and malaria prevalence 15.3%) (10,11). Nonetheless, in a previous study in Al-Mukalla, 222 patients with clinically suspected viral hemorrhagic fever were nonreactive to chikungunya virus, Alkhurma virus, Rift Valley fever virus, and yellow fever virus by RT-PCR (12), suggesting that other studies are needed to identify the possible causative agents.

Dengue is emerging to be a serious mosquitoborne disease in war-torn Yemen. Its presence among 51% of febrile patients suspected to have dengue is almost comparable to the percentage reported in dengue-endemic countries of Southeast Asia. It is expected that the public health problems associated with dengue will worsen during the continuing civil war in Yemen.

Mr. Alghazali is a PhD candidate at the University of Malaya, Kuala Lumpur, Malaysia. His primary research interest is dengue epidemiology in Yemen.