Homelessness has not previously been identified as a risk factor for respiratory syncytial virus (RSV) infection. We conducted an observational study at an urban safety-net hospital in Washington, USA, during 2012–2017. Hospitalized adults with RSV were more likely to be homeless, and several clinical outcome measures were worse with RSV than with influenza.

Respiratory syncytial virus (RSV) is increasingly recognized as a major pathogen in adults and shows a disease burden comparable to that for influenza (1). No vaccine is currently available. However, several vaccine candidates against RSV are in clinical trials, and the elderly, those with chronic lung disease, infants, and immunocompromised persons remain priority target populations for prevention efforts (2,3).

Rates of homelessness are increasing in major urban centers because of lack of affordable housing and slower wage growth (4). Homeless persons experience higher rates of illness and death compared with the general population, partly because of infectious diseases from lack of access to sanitation, crowding in shelters, untreated chronic medical conditions, and higher rates of mental health issues and substance use (5). Studies have described local outbreaks of rhinovirus and influenza in homeless shelters (6). Identification of homeless persons as an at-risk population for severe RSV disease might guide prioritization strategies for RSV vaccines and therapeutics as they become available. We aimed to evaluate risk factors and clinical outcomes of adults hospitalized with RSV infections versus those with influenza in an urban medical center serving a region that had high rates of homelessness.

We conducted a retrospective case–control study of adults hospitalized with RSV and influenza at Harborview Medical Center (Seattle, WA, USA) during July 2012–June 2017. This center is an academic tertiary medical center that functions as the safety-net hospital for the Seattle metropolitan area. We identified patients on the basis of laboratory records of specimens containing influenza A/B virus and RSV by using a rapid PCR assay (Focus Diagnostics, https://www.focusdx.com) or the Xpert Xpress Flu/RSV test (Cepheid, http://www.cepheid.com) (Appendix). 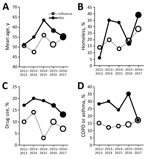 Figure 2. Sociodemographic characteristics of patients hospitalized with RSV infection or influenza across 5 seasons, 2012–2017, Washington, USA. A) Age; B) homelessness; C) drug use; and D) COPD or asthma. Size of each...

A total of 865 patients were hospitalized with RSV infection (n = 157) or influenza A/B (n = 708) during July 2012–June 2017 (Table 1; Figure 1). We showed by multivariable analysis of risk factors for hospitalization with RSV infection versus influenza that older age, homelessness, having chronic obstructive pulmonary disease (COPD) or asthma, and drug use were associated with an increased odds ratio (OR) for RSV hospitalization compared with influenza (Table 1; Figure 2). Drug use showed a correlation with homelessness (OR 5.18, 95% CI 3.17–8.46).

Overall, a higher proportion of adults hospitalized with RSV infection were admitted to the intensive care unit (ICU), readmitted within 30 days, and received any antimicrobial drug compared with patients hospitalized with influenza (Table 2). A total of 4% (7/158) of adults given a diagnosis of RSV infection died during hospitalization, compared with 3% (21/712) of those with influenza. Having COPD/asthma was not correlated with antimicrobial drug use (OR 1.07, 95% CI 0.71–1.60). Only 10% (4/40) of patients with RSV infection who were readmitted within 30 days had a positive swab specimen for the same virus at the second admission.

In this study of adults hospitalized during 5 years in an urban hospital, 32% of patients given a diagnosis of RSV infection were homeless, compared with 6.5% of all patients hospitalized. Patients hospitalized with RSV infection were more likely to be older, homeless, drug users, or have COPD/asthma compared with persons with influenza. Homelessness has reached a national public health crisis, and many homeless persons seek acute care in emergency departments (9). The city of Seattle has the largest concentration of homelessness per capita in the country (10). Outbreaks of infections with respiratory viruses have been described in homeless shelters, in which transmission might be facilitated by crowding, poor sanitation, and the ability of RSV to spread through fomites (6,11). Our findings for RSV in this homeless population might be generalizable to other urban public hospitals.

Homelessness and having RSV infection were independent risk factors for hospital readmission, demonstrating that the higher risk for poor outcomes in homeless persons was not simply explained by the disproportionately higher number of diagnosis of RSV infection in this group. All-cause readmission within 30 days is a major quality metric used by the Centers for Medicare and Medicaid Services and Hospital Quality Alliance (http://www.allhealthpolicy.org/glossary/hospital-quality-alliance). Other studies have found an association between lower education and unemployment with rehospitalization and that most rehospitalizations were related to concurrent conditions (13).

In conclusion, homeless persons might represent a previously unrecognized population at increased risk for poor outcomes caused by infection with RSV. An effective vaccine or therapeutic in adults could benefit this medically underserved population. Further data on the impact of homelessness on respiratory virus infection severity and outcomes are needed to guide public health strategies and implementation.

Dr. Boonyaratanakornkit is a senior fellow at the University of Washington and the Fred Hutchinson Cancer Research Center, Seattle, WA. His primary research interest is the epidemiology and immunology of respiratory viruses.