African swine fever is one of the most dangerous diseases of swine. We confirmed the 2019 outbreak in Vietnam by real-time reverse transcription PCR. The causative strain belonged to p72 genotype II and was 100% identical with viruses isolated in China (2018) and Georgia (2007). International prevention and control collaboration is needed.

Since its first identification in East Africa in the early 1900s, African swine fever (ASF) spread to Kenya in the 1920s; transcontinental outbreaks in Europe and South America in the 1960s and in Georgia (Caucasus) in 2007 led to subsequent transmission to neighboring countries east of Georgia. Along with the outbreaks in the eastern territory of the Russian Federation, acute ASF outbreaks were reported in China in 2018 (1).

During January 15–31, 2019, a disease outbreak at a family-owned backyard pig farm in Hung Yen Province, Vietnam, was reported. The farm, ≈50 km from Hanoi and 250 km from the China border, housed 20 sows. In the early stage of the outbreak, 1 piglet and 1 sow exhibited marked redness all over the body, conjunctivitis, and hemorrhagic diarrhea. Breeding gilts demonstrated anorexia, cyanosis, and fever (>40.5°C). 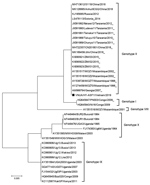 The clinical signs and necropsy findings of the pigs involved in the 2019 outbreak in Vietnam were similar to those caused by the virus strains in China and Georgia (e.g., high mortality rates over a short period and multifocal hemorrhagic lesions in many organs). However, the clinical forms and pathophysiology of ASF varied according to virus virulence, exposure dose, and transmission route.

Considering the epidemiologic features of the site where ASF has recently occurred, the virus is highly likely to have reached Vietnam via infected wild boar, by movement of pigs and pork products, or by infected fomites (5). The most probable source and major cause of transmission across the countries is thought to be ASF virus–contaminated pork products (2). The outbreak in Vietnam was confirmed in the northern part of the country, near China, where many instances of illegal movement of animals and meat products across the China–Vietnam border have been reported (http://www.fao.org/3/i8805en/I8805EN.pdf). Therefore, it is likely that the virus originated in China.

Although the p30, p54, and p72 sequences were 100% identical to those from China and Georgia, whole genomes must be monitored for possible changes and further spread of the ASF virus. Since the 2018 outbreak in China, the subsequent ASF outbreak in Vietnam (February 1, 2019) increases the possibility of virus spread to nearby swine-raising Southeast Asia countries, including Laos, Thailand, Cambodia, and Myanmar. Although ASF has occurred in many countries, including Russia and Europe, its outbreak in Asia is far more critical because 60% of the world’s pig population is concentrated in that area and the socioeconomic effects of swine disease would be greater than that in other regions. Therefore, to avoid great economic losses worldwide, we highly recommend that preventive and control measures be developed and implemented through international collaboration.

Dr. Le is a veterinarian and associate professor at Vietnam National University of Agriculture, with a main research interest in virology, including viruses of swine and birds.

This research was supported by the Vietnam National University of Agriculture, Vietnam, and by BioNano Health Guard Research Center, funded by the Ministry of Science and Information and Communications Technology of South Korea, as a Global Frontier Project (2013M3A6B2078954).