During June 2017–December 2018, norovirus was responsible for 10.9% of acute gastroenteritis cases in Thailand. Genogroup I (GI) was found in 14% of samples, of which 12 were co-infected with genogroup II (GII). In 35.8% of samples, GII.Pe-GII.4 Sydney predominated. Diverse recombinant strains of GI and GII norovirus co-circulated year-round.

Norovirus is a major cause of nonbacterial acute gastroenteritis; sporadic cases and outbreaks occur among children and adults (1). Most strains infecting humans belong to genogroups I and II (GI and GII), of which GII.4 has been most predominant (2). Reemergence of norovirus infection is attributed to new variants resulting from frequent recombination between the end of open reading frame (ORF) 1, encoding the RNA-dependent RNA polymerase (RdRp), and ORF2, encoding the major capsid protein (VP1) of the norovirus genome. Lack of a robust cell culture system for human norovirus infection in humans and lack of long-lasting neutralizing antibodies in previously infected persons present challenges for vaccine development.

In recent years, a relative increase in global prevalence of norovirus has been attributed to GII.P16-GII.4, GII.17, and GII.P16-GII.2 (3–5). As in temperate regions, norovirus infection in Thailand occurs as sporadic cases and outbreaks year-round. After the recent increase of GII.P16-GII.2 in Thailand in late 2016 (6), we sought to identify the most frequently identified genotype(s). 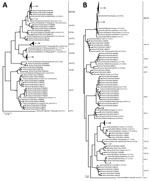 The significance of GI/GII co-infection in some samples is unclear but is probably not the result of laboratory contamination because as many as 7 combinations were identified (4 samples of GI.5/GII.17; 2 each of GI.3/GII.P16-GII.4 Sydney and GI.5/GII.P16-GII.21; and 1 each of GI.1/GII.P8-GII.6, GI.3/GII.17, GI.7/GII.17, and GI.7/GII.P7-GII.6). We did not perform dual typing on GI strains because they were less predominant than GII strains. However, future analysis of their recombination patterns will be useful for better characterizing these rare but potentially significant genotypes. This study was somewhat limited by lack of detailed clinical information accompanying the submitted samples and absence of surveillance from southern Thailand (≈14% of the country’s population). Molecular epidemiology and continued surveillance of norovirus strain diversity will increase awareness among clinicians and help epidemiologists determine global transmission patterns.

Ms. Chuchaona is a doctoral graduate student at Chulalongkorn University. Her primary research interests include viral gastroenteritis caused by norovirus and rotavirus.