POWV is transmitted by members of the Ixodes genus of ticks, including I. cookei and the more opportunistic and aggressive I. scapularis. POWV has 2 lineages; lineage 2 (deer tick virus) has emerged quickly in parts of North America, along with the expanding range of I. scapularis ticks.

POWV infection typically begins with prodromal symptoms including fever, nausea, headache, and myalgia. Central nervous system involvement includes an altered level of consciousness, paralysis, or ophthalmoplegia (4). POWV encephalitis has a 10% mortality rate, and <50% of survivors suffer residual deficits (5). Studies with mice have demonstrated that POWV can affect motor neurons in the anterior horns of the spinal cord (6). These same neurons are affected by poliovirus, West Nile virus, and enterovirus D68 (7). However, POWV infection with cord involvement in humans is not well documented; 1 human case demonstrated motor neuron pathology after POWV lineage 2 infection (8), and a second case with suspected motor neuronopathy was reported in 2018 (9).

We present the case of a 62-year-old man living in urban Ontario who experienced nausea, vomiting, and abdominal pain while vacationing in rural Newfoundland. He sought treatment at a hospital in Nova Scotia and experienced diplopia and ataxia. A computed tomography scan of the head did not show any acute intracranial event.

Seven days after arriving at the hospital, the patient was unable to lift his arms and was transferred to a tertiary center in Ottawa, Ontario (The Ottawa Hospital). Neurologic exam showed facial and extraocular muscle weakness. He had flaccid tone and absent power in his upper extremities and reduced strength in his lower extremities. Sensation was preserved. Nerve conduction studies demonstrated diffusely low motor amplitudes, normal sensory amplitudes, and normal conduction velocities suggestive of a motor neuronopathy. Electromyography in the acute phase was not possible due to poor patient cooperation. 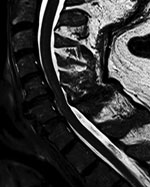 Figure. Sagittal T2-weighted image of cervical spinal cord in a patient with Powassan virus infection, Canada. A longitudinal hyperintensity of the anterior horn is visible from C3 to C6.

Follow-up MRI of the brain and spine 1 month later showed interval resolution of leptomeningeal abnormalities, but abnormal signal within the anterior horn of the cervical spine remained. Electrodiagnostic testing repeated 6 months after symptom onset again showed normal sensory nerve conduction studies and abnormal motor nerve conduction studies. There was diffuse denervation in all cervical myotomes including the paraspinal muscles, confirming a motor neuronopathy consistent with a poliomyelitis-like presentation of POWV. We suspect that initial arbovirus serology was performed too early in the disease course, because paired serology 4 weeks later demonstrated seroconversion and confirmed diagnosis.

Our case shares similarities with a recently published report of POWV infection (9). In that case, a patient vacationing in the Luskville region of Quebec, Canada, experienced cranial nerve pathologies and flaccid weakness of the upper extremities. Electrodiagnostic testing showed evidence of diffuse denervation and reinervation across multiple myotomes that was consistent with a motor neuronopathy. Imaging of the brain showed only mild hyperintensities that would not account for the patient’s disproportionate weakness. A spinal MRI was not performed. As in our case, acute arbovirus serology results were initially negative but were positive in paired testing (9).

The incidence of POWV infection has increased since 2017 (7). I. scapularis ticks and deer tick virus may be becoming more widely disseminated in northern regions, potentially due to warming climates, whereas infection with prototypical POWV transmitted by I. cookei ticks remains rare and stable in distribution (10). It is possible that Canada will see an increasing number of cases similar to ours. Our findings emphasize the need to include POWV infection in the differential diagnosis for patients with polio-like symptoms in tick-endemic regions.

Dr. Picheca and Dr. Yogendrakumar are resident physicians specializing in neurology at the University of Ottawa. Dr. Picheca has an interest in infectious diseases. Dr. Yogendrakumar’s primary research interests are in stroke and intracerebral hemorrhage.