We detected a novel reassortant highly pathogenic avian influenza A(H5N2) virus in 3 poultry farms in Egypt. The virus carried genome segments of a pigeon H9N2 influenza virus detected in 2014, a nucleoprotein segment of contemporary chicken H9N2 viruses from Egypt, and hemagglutinin derived from the 2.3.4.4b H5N8 virus clade.

The zoonotic nature of HPAI H5N1 2.2.1 viruses has caused in Egypt the highest number of human infection cases per country worldwide; a low level of sporadic benign human cases of H9N2 viral infection has also been reported from Egypt (4). Continued adaptation by point mutations, but not reassortment, to enhance replication in mammalian hosts has been repeatedly reported in avian influenza in Egypt (5). Here, we describe the detection of a new reassortant HPAI virus in commercial chicken holdings in Egypt. This virus carries the hemagglutinin (HA) gene of HPAI clade 2.3.4.4b H5N8 virus and 7 genome segments derived from Egyptian H9N2 viruses (6).

During January–April 2019, we examined samples from 11 commercial broiler farms reporting respiratory clinical signs among chickens by using the Riems Influenza A Typing Assay (7). We detected co-presence of avian influenza viruses subtypes H5 and H9 with N2 (8 farms) as well as H5N2 only (3 farms).

Figure 1. Genotype and reassortment analyses based on full-length genome sequences of avian influenza viruses in Egypt previously detected and those identified in this study. Colors indicate grouping of segment origin according to... 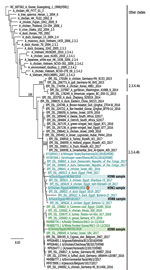 Figure 2. Phylogenetic analysis of the hemagglutinin segments of reassortant highly pathogenic avian influenza H5N2 and H5N8 viruses belonging to clade 2.3.3.4b from Egypt and reference viruses. Sequence analysis was based on alignment...

We selected 8 samples representing H5N8, H9N2, and H5N1 from 2017–2018, plus 1 positive H5N2 sample from 2019, for full-genome sequencing (Table 1; Appendix 1 Table). Sanger- and next-generation sequencing results identified various reassortants new to Egypt (Figure 1). All H5 HA segments encoded a polybasic cleavage site, PLREKRRKR-GLF (H5 clade 2.3.4.4b) or PQGEKRRKKR-GLF (H5 clade 2.2.1.2), thus classifying those viruses as highly pathogenic. We identified the closest related sequences by BLAST (https://blast.ncbi.nlm.nih.gov/Blast.cgi) homology searches in the GISAID (http://platform.gisaid.org) and International Nucleotide Sequence Data Collaboration (http://www.insdc.org) databases. Phylogenetic analyses of each genome segment aided in clustering sequences (Appendix 1 Figure). We delineated the putative origin of each of the genome segments (Figure 1). The HA segment of the novel HPAI H5N2 reassortant virus was derived from clade 2.3.4.4b viruses with closest homology to viruses circulating in ducks in Egypt in 2017 (Figure 2), whereas >4 additional genome segments (polymerase basic 1, polymerase basic 2, polymerase, and nonstructural protein) originated from novel reassortant H9N2 viruses first detected in pigeons in Egypt during 2014 (6). The nucleoprotein segment and perhaps others were acquired from H9N2 viruses circulating in chickens in Egypt since 2010. Matrix and neuraminidase segments are identical in the pigeon and chicken H9N2 viruses. We identified no new mutations in the genome of reassortant H5N2 that would suggest increased adaptation to mammalian hosts. In addition, we observed 2 previously undescribed genotypes of HPAI H5N8 with distinct polymerase basic 1 and 2 segment origins (Figure 1). The composition of HPAI H5N1 viruses phylogenetically assigned to clade 2.2.1.2 (Figure 1; Appendix 1 Figure) was unaltered compared with other HPAI H5N1 viruses isolated since 2015.

Natural reassortants between H5 HPAI of the gs/GD lineage and H9N2 viruses, including subtype H5N2, have repeatedly emerged in Southeast Asia (8). So far, both the HPAI H5N1 2.2.1.2 and the co-circulating H9N2-G1 viruses appeared to be genotypically stable in poultry in Egypt. Successful forced reassortment of these viruses by co-cultivation and serum selection in embryonated chicken eggs ruled out a principal incompatibility between their genome segments (5); however, Naguib et al. did not rescue an H5N2 reassortant.

We and others have shown that HPAI H5 viruses of clade 2.3.4.4 have a high tendency to reassort with various influenza A viruses of wild birds or poultry (9). Thus, the incursion of clade 2.3.4.4b viruses into Egypt in 2016 not only added another antigenically distinct HPAI virus, but also signaled an increased reassortment risk. In fact, the 2.3.4.4b H5N8 virus proved to be a parent of the newly emerged H5N2 reassortant. Likewise, the second parental virus, an influenza A(H9N2) virus first detected in pigeons, was not described in Egypt before 2014. Genotypically, this H9N2 virus is distinct from the third parental virus, that is, the original H9N2 virus introduced to poultry in Egypt in 2010 (Figure 1). Infection of pigeons with clade 2.3.4.4b H5N8 HPAI virus has been described in Egypt, although pigeons are believed to be less susceptible to avian influenza infections (10). Although we cannot attribute the origin of the current HPAI H5N2 reassortant to a single host species, we cannot exclude pigeons as a possible host.

In March 2019, Egypt’s Ministry of Agriculture announced the detection of a new influenza A(H5N2) virus from seemingly healthy ducks in the Dakahlia governorate (11); recently published information on this reassortant indicated the presence of a neuraminidase N2 segment of chicken H9N2 viruses in the background of an HPAI H5 clade 2.3.4.4b virus (11). Our data confirm the presence of a different H5N2 reassortant and its occurrence in chickens in different geographic regions of Egypt (Table). We detected the current reassortant HPAI H5N2 viruses in 2 different broiler farms in Beheira (January and March 2019) and 1 broiler farm in Fayoum (January 2019) governorates (Table). The HA amino acid sequence of these reassortants does not signal antigenic variation compared with parent HPAI H5 subtype of clade 2.3.4.4b. Antigenic and further phenotypic properties, such as host specificity, require investigation as soon as isolates are available. For the H5N2-positive samples, only FTA card material was available at Friedrich-Loeffler-Institut. However, H5N2 isolates were successfully generated at the Beni-Suef University, Egypt, but were currently not available for further antigenic and phenotypic analyses (M. El-Kady, unpub. data).

Intensified targeted surveillance in poultry and pigeons is urgently required and may lead to detection of additional reassortants. However, co-detection in a sample of H5N8 and H9N2 subtypes by reverse transcription quantitative PCR may blur the identification of H5N2 reassortants; plaque purification of such samples would aid in separating subtypes but cannot currently be used in routine diagnostics.

There is a risk for transboundary spread of HPAI A(H5N2) virus in northern Africa and the Middle East, and similar reassortment events are to be expected in regions where clade 2.3.4.4 HPAI and H9N2 viruses are co-circulating. Long-term solutions in combating avian influenza virus infections in poultry are sorely needed and would help to lower risks of human exposure to zoonotic avian influenza viruses such as the highly zoonotic H7N9 viruses in China that carry a full set of internal genes of an H9N2-G1–like avian influenza virus (12).

Dr. Hassan is a poultry veterinary specialist at Beni-Suef University, currently on leave to complete his PhD studies at the Friedrich-Loeffler-Institut, Isle of Riems, Germany. His primary research interest is focused on respiratory infectious diseases in poultry with an emphasis on avian influenza.

We acknowledge the originating and submitting laboratories that provided sequences available in the EpiFlu database (http://www.gisaid.org) (Appendix 2).

K.E.H. received a grant from the Egyptian Ministry of Higher Education (Mission sector). This work was financed in part by the European Union Horizon 2020 program grant agreement DELTA-FLU (no. 727922).