Hantaviruses cause hemorrhagic fever in humans worldwide. However, few hantavirus surveillance campaigns occur in Africa. We detected Seoul orthohantavirus in black rats in Senegal, although we did not find serologic evidence of this disease in humans. These findings highlight the need for increased surveillance of hantaviruses in this region.

Hantaviruses (family Hantaviridae, genus Orthohantavirus) are RNA viruses transmitted by aerosolized excreta from infected rodents and shrews. In humans, they cause hemorrhagic fever with renal syndrome (more often observed in Asia and Europe) and cardiopulmonary syndrome (more common in the Americas) (1). Only 1 case has been confirmed in Africa, in the Central African Republic in 1987 (2). However, studies from 2006 through 2013 have discovered new hantaviruses in autochthonous African rodents, moles, and bats (3,4). In addition, serologic evidence in humans and rodents in Africa suggest local circulation (5). For example, a study in rural areas of Senegal found 11.5% of rodents and 16.6% of humans had antibodies against hantaviruses (3). More recently, serologic evidence of hantaviruses was reported in domestic and peridomestic rodents from some regions in Senegal (6).

Southeastern Senegal has become a major trade area because of urbanization and substantial improvement of its road and rail networks in the late 1990s (7). Within a few years, these changes led to the rapid spread of a major invasive rodent species, the black rat (Rattus rattus [family Murinae]), which is a reservoir for Seoul orthohantavirus (SEOV) (4,5,7). To assess the prevalence of hantaviruses in rodents, we screened for hantaviruses in R. rattus rats and commensal or peridomestic co-existing rodents in 2012–2013, approximately 15 years after the 1998 opening of a tarred road in eastern Senegal.

The national ethics committee for research of Senegal approved the study (authorization no. 0360-MSAS/DPRS/DR, on October 24, 2011). During May 2012–December 2013, we trapped small mammals as previously described (8) inside dwelling places and their surroundings (immediate and local) over periods of 1–6 consecutive days.

We caught 1,414 small mammals, including 403 black rats, from 10 different species (Appendix Table). We sampled whole blood, brain, and visceral organ tissues, which we then transferred to the Institut Pasteur (Dakar, Senegal). We triturated each solid sample in Leibovitz-15 medium (GIBCO-BRL, https://www.thermofisher.com) and centrifuged them to collect the suspension. To collect serum, we centrifuged whole blood samples. We extracted RNA from these different suspensions using the QIAamp RNA Viral Kit (QIAGEN, https://www.qiagen.com) according to the manufacturer’s recommendations. To make cDNA, we used avian myeloblastosis virus reverse transcriptase (Promega, https://www.promega.com) followed by a nested conventional PCR with GoTaq Polymerase (Promega, https://www.promega.com) and a highly conserved hantavirus primers system selective for the partial large segment protein gene (9). We sequenced amplicons using GENEWIZ (https://www.genewiz.com), assembled them using EMBOSS Merger software (http://www.bioinformatics.nl/cgi-bin/emboss/merger), and analyzed them with BLAST (http://blast.ncbi.nlm.nih.gov/Blast.cgi). We performed sequence alignment with Mafft (10) and built a maximum-likelihood phylogenetic tree with iQ-TREE (11), using 1,000 replicates for bootstrapping. 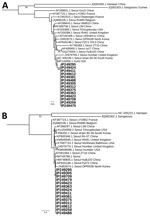 We detected SEOV RNA in 13 black rats caught in 3 villages: Goumbayel (7 rodents), Soutouta (4 rodents), and Dianke Makha (2 rodents). These villages were located »1 hour’s drive from the main road between Tambacounda and Kidira (Figure 2). Frequent movement of goods and humans between these 3 villages might explain the low genetic diversity among the new SEOV strains from black rats. We did not observe signs of disease in the infected animals at the time of capture. Of the 4 villages that yielded the highest numbers of black rats in this study, 3 harbored rats infected with SEOV (Figure 2) (7). High densities of black rats might contribute to the occurrence of hantavirus in these villages, especially because host demography might affect hantavirus circulation (13).

Seasonal patterns might complicate these findings. We surveyed the villages harboring SEOV-infected rats in February 2013, which might be a favorable period for rodent reproduction, population increase, and thus hantavirus circulation (13). Despite the presence of juveniles, R. rattus populations had relatively high proportions of sexually active animals (75% in Goumbayel, 48% in Soutouta, and 71% in Dianke Makha) (Appendix Figure). These data suggest that high level of interactions (male–female, adult–juvenile) occurred in these populations during that period, possibly promoting viral circulation. Conversely, we investigated nearby villages (Dieylani, Dide Gassama, Koussan, and Talibadji, in which we did not find evidence of hantavirus-infected black rats) in October 2012, at the end of the rainy season. Our investigations in May 2012 and November 2013 of the Kedougou area did not detect evidence of SEOV.

To assess potential human transmission, we performed parallel studies of human populations in some villages. Participants consented to an interview about rodent exposure and gave blood samples. During October 2012–March 2013, we recruited 541 participants with a mean age of 24 years (range 2–91 years) (Table). Of the 541 participants, 372 (68.8%) reported close contact with rodents. The highest rates of rodent exposure were in Soutouta and Sinthiou Doube (Table). We performed an in-house ELISA specific to IgG against SEOV on the human serum samples using reagents from the US Centers for Disease Control and Prevention (Atlanta, GA, USA). No IgG against SEOV was detected in the tested human samples, regardless of whether the participant’s village had evidence of SEOV-infected black rats; this finding suggests a lack of human exposure. The role of species diversity in virus transmission is extremely complex (14). The relatively low SEOV prevalence in black rats (Appendix Table) might explain the negative results of the human serologic survey.

We found SEOV, a hantavirus pathogenic to humans, in black rats in southeastern Senegal. Phylogenic analyses grouped the newly detected SEOV with strains from Asia. Exchanges between Africa and Asia can potentially increase the opportunities for pathogens to expand their geographic range as previously described (15).

In-depth phylogenetic analysis of complete genomes would help elucidate the molecular evolution of this virus in Africa. This study highlights the need to improve hantavirus surveillance in Senegal and other countries in Africa for public health prevention strategies.

Dr. Diagne is a postdoctoral researcher at the Virology Department of Institut Pasteur de Dakar. His research interests include arboviruses and hemorrhagic fever viruses, such as hantaviruses in animal reservoirs and humans.

Page created: June 25, 2020
Page updated: September 17, 2020
Page reviewed: September 17, 2020
The conclusions, findings, and opinions expressed by authors contributing to this journal do not necessarily reflect the official position of the U.S. Department of Health and Human Services, the Public Health Service, the Centers for Disease Control and Prevention, or the authors' affiliated institutions. Use of trade names is for identification only and does not imply endorsement by any of the groups named above.