The Onchocerca lupi nematode infects dogs, cats, and humans, but whether it can be spread by coyotes has been unknown. We conducted surveillance for O. lupi nematode infection in coyotes in the southwestern United States. We identified multiple coyote populations in Arizona and New Mexico as probable reservoirs for this species.

Onchocerca lupi is a species of zoonotic, filarial nematode that causes onchocerciasis in dogs, cats, and humans. It was first described in 1967 in Georgia, then part of the USSR, in the periocular tissues of a wolf (Canis lupus lupus) (1) and has been reported in dogs (C. lupus domesticus). Since 2013, increased detection of O. lupi infections in dogs and humans in the United States and Europe has renewed interest in this parasite, its geographic distribution, and the range of its natural hosts (2).

Because of the growing number of O. lupi infections in canines and humans, public health officials must understand the prevalence and distribution of this parasite in wildlife. Toward that goal, we investigated coyote populations in Arizona, New Mexico, and Nevada as potential primary hosts and natural reservoirs for the O. lupi nematode.

From December 2015 through July 2018, we collected skin tissue samples from coyotes harvested for predation management and from a hunt in Arizona, New Mexico, and Nevada conducted by the Arizona Game and Fish Department. We did not euthanize any coyotes for the specific purpose of this study. Skin tissue from the interocular frontal area of the animal’s head was removed and stored in 80% ethanol until we extracted the DNA. We screened 707 DNA sequences for an O. lupi cytochrome c oxidase (COI) gene (8) using SYBR Green–real-time PCR on a QuantStudio 7 Flex Real Time PCR System (Thermo Fisher Scientific, https://www.thermofisher.com). We used DNA from an adult worm from an infected dog in northern Arizona as a positive control (GenBank accession no. MT878136). We included a no-template control in every real-time PCR reaction plate. We compared the product’s melting curve to the positive control using a dissociation curve. We prepared every sample that had a melting curve resembling that of the positive control for amplicon sequencing using neat DNA and Illumina (https://www.illumina.com) technologies.

Thirty-seven (5.2%) samples from 8 counties in Arizona and New Mexico (Table) had sequences that aligned with the reference gene. Of these samples, 36 were from Arizona and 1 was from Hildago County, New Mexico. In Arizona, the highest prevalences of O. lupi infection were in Navajo County (17 [35.4%] positive coyotes) and Apache County (10 [9.4%]) (Figure 1). Coconino County had the third highest number (5) of coyotes that tested positive for the O. lupi nematode but a lower positivity rate (2.7%) than other counties. For example, in Hidalgo County we sampled only 2 coyotes, 1 of which tested positive. 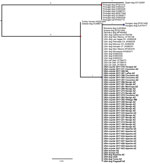 We produced a phylogenetic tree of our 43 COI sequences (including 4 that were isolated from infected dogs and 2 from humans [GenBank accession nos. MT878134–9]) in addition to 30 O. lupi COI genes on GenBank spanning 432 total bases containing 12 single-nucleotide polymorphisms (SNPs) (Figure 2) using IQTREE version 1.6.9 (9) software with 1,000 bootstrap replicates. Examining only this region of the COI gene, we determined the US samples (from dogs, cats, coyotes, and humans) clustered within a single clade with dog samples from Germany, Romania, and Greece. Within this clade, we detected no SNP differences. This clade was separated from a sample from Hungary by 1 SNP and from a single clade containing a human isolate from Turkey and a dog sample from Greece by 1 SNP.

O. lupi infection has been reported mainly in domestic dogs and cats in the southwestern United States (2,4). However, international transportation (purchasing, adopting, and exporting) of dogs from that area has introduced this parasite into environments to which it is not endemic (7,10). We hypothesize coyotes are reservoirs for the O. lupi nematode and could spread this parasite throughout the southwestern United States.

We consider the probable importance of coyotes as natural reservoirs and dispersal agents. In the United States, the average home territory covered by a resident coyote population (either a pack or lone coyote) is 5–41 km2, whereas solitary transient coyote territories are up to 155 km2 (11,12). The large geographic range and widespread occurrence of not only coyotes, but also the putative black fly vector (Diptera: Simuliidae) (13), might facilitate the spread and establishment of the O. lupi nematode in the southwestern United States. Furthermore, many North American wild canids, such as wolves and foxes, have never been assessed for the O. lupi nematode but also should be considered as potential reservoirs. Although the O. lupi nematode is only endemic to the southwestern United States, without appropriate surveillance and mitigation strategies it might spread across the United States and into Canada and Mexico. We are not aware of any reports of O. lupi nematodes in Mexico; however, we identified a coyote that tested positive for O. lupi infection in Hildago County, which borders Mexico. Increasing surveillance in nearby counties upon identification of O. lupi nematode–positive coyotes would be prudent. Furthermore, the overlap of rural human residences with coyote and black fly populations probably increases the risk for human exposure.

In summary, canine onchocerciasis is an ongoing emerging infectious threat to wildlife, companion animals, and humans. The expanding range to which the O. lupi nematode is endemic, coupled with increased incidence of onchocerciasis in humans and canines in the southwestern United States, reinforces the need to understand, respond to, and potentially mitigate this threat. This understanding will enable the development of surveillance and mitigation strategies, determine the risk of spread to nonendemic regions, and identify human populations at high risk of infection.

Ms. Roe is a research coordinator at the Pathogen and Microbiome Institute and a doctoral student in the School of Informatics and Computing at Northern Arizona University. Her primary research interests include pathogen genomics of parasites, fungi, and bacteria.

We thank Yvonne Qvarnstrom for providing 2 O. lupi nematode–positive samples from 2 humans in Arizona that were included in this study. We also acknowledge Laura Adams for her contribution.

This study was funded in part by contract 200-2016-92313 with the Centers for Disease Control and Prevention under its Advanced Molecular Detection Initiative.

Page created: July 13, 2020
Page updated: November 19, 2020
Page reviewed: November 19, 2020
The conclusions, findings, and opinions expressed by authors contributing to this journal do not necessarily reflect the official position of the U.S. Department of Health and Human Services, the Public Health Service, the Centers for Disease Control and Prevention, or the authors' affiliated institutions. Use of trade names is for identification only and does not imply endorsement by any of the groups named above.